Cloning is the process of producing genetically identical individuals of an organism either naturally or artificially.

Cloning is the process of producing genetically identical individuals of an organism either naturally or artificially. In nature many organisms produce clones through asexual reproduction.

Cloning in biotechnology refers to the process of creating copies of organisms or copies of cells or DNA fragments (molecular cloning).

Dolly was the first mammal (Sheep) clone developed by Ian Wilmut and Campbell in 1997. Dolly, the transgenic clone was developed by the nuclear transfer technique and the phenomenon of totipotency. Totipotency refers to the potential of a cell to develop different cells, tissues, organs and finally an organism.

The mammary gland udder cells (somatic cells) from a donor sheep (ewe) were isolated and subjected to starvation for 5 days. The udder cells could not undergo normal growth cycle, entered a dormant stage and became totipotent. An ovum (egg cell) was taken from another sheep (ewe) and its nucleus was removed to form an enucleated ovum. The dormant mammary gland cell/udder cell and the enucleated ovum were fused. The outer membrane of the mammary cell was ruptured allowing the ovum to envelope the nucleus. The fused cell was implanted into another ewe which served as a surrogate mother. Five months later dolly was born. Dolly was the first animal to be cloned from a differentiated somatic cell taken from an adult animal without the process of fertilization (Fig. 10.10). 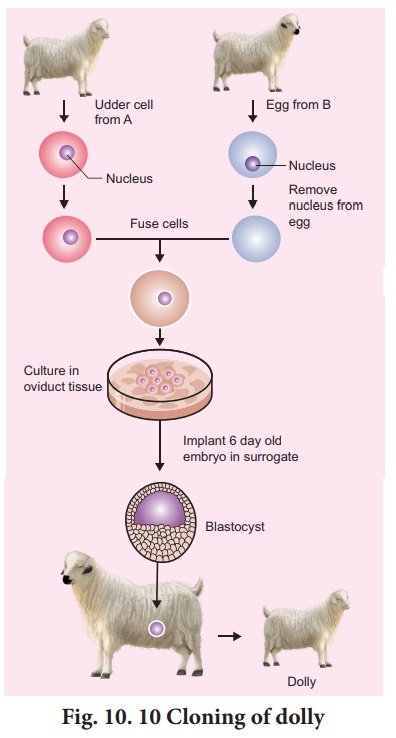 Advantages and Disadvantages Of Cloning Animals

·                     Offers benefits for clinical trials and medical research. It can help in the production of proteins and drugs in the field of medicine.

·                     Animal and human activists see it as a threat to biodiversity saying that this alters evolution which will have an impact on populations and the ecosystem.

·                     Reports show that animal surrogates were manifesting adverse outcomes and cloned animals were affected with disease and have high mortality rate.