Applications of biotechnology in Medicine

Zoology : Applications of biotechnology in Medicine

The Human insulin is synthesized by the β cells of Islets of Langerhans in the pancreas. It is formed of 51 aminoacids which are arranged in two polypeptide chains, A and B. The polypeptide chain A has 21 amino acids while the polypeptide chain B has 30 amino acids. Both A and B chains are attached together by disulphide bonds. Insulin controls the levels of glucose in blood. It facilitates the cellular uptake and utilization of glucose for the release of energy. Deficiency of insulin leads to diabetes mellitus which is characterized by increased blood glucose concentration and a complex of symptoms which may lead to death, if untreated. A continuous program of insulin dependence is required to treat this deficiency. 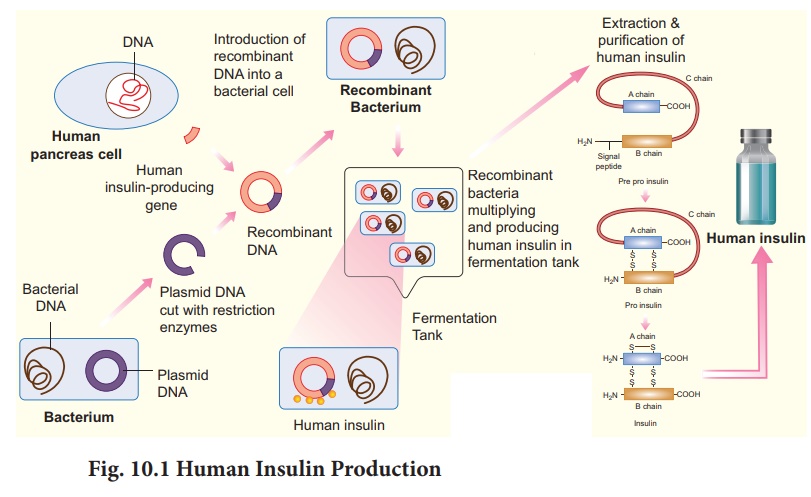 In the early years, insulin isolated and purified from the pancreas of pigs and cows was used to treat diabetic patients. Due to minor differences in the structure of the animal insulin as compared to human insulin, it resulted in the occurrence of allergic reactions in some diabetic patients. Production of insulin by recombinant DNA technology started in the late 1970s. This technique involved the insertion of human insulin gene on the plasmids of E.coli. The polypeptide chains are synthesized as a precursor called pre-pro insulin, which contains A and B segments linked by a third chain (C) and preceded by a leader sequence. The leader sequence is removed after translation and the C chain is excised, leaving the A and B polypeptide chains (Fig. 10.1).

Insulin was the first ever pharmaceutical product of recombinant DNA technology administered to humans. The approval to use recombinant insulin for diabetes mellitus was given in 1982. In 1986 human insulin was marketed under the trade name Humulin.

Best and Banting in 1921, isolated insulin from the pancreatic islets of a dog and demonstrated its effectiveness against diabetes.

Alpha lactalbumin is a protein composed of 123 amino acids and 4 disulphide bridges, with a molecular weight of 14178 Da. In human milk, α lactalbumin is the most abundant protein comprising 25% of total protein found in human milk. It is synthesized by the mammary glands. α lactalbumin binds calcium and zinc ions and possesses bactericidal and anti tumour activities.

Somatic cell nuclear transfer is a technique for creating a viable embryo from a body cell and an egg cell. This technique is discussed later in animal cloning.

At about the same time when recombinant insulin was first made in E. coli, other research groups worked on human growth hormones somatostatin and somatotropin. These are peptide hormones secreted by the pituitary gland that helps in the growth and development by increasing the uptake of amino acids and promoting protein synthesis. Deficiency of human growth hormone causes dwarfism, which could be treated by injecting hGH extracted from the human pituitary glands.

Using recombinant DNA technology hGH can be produced (Fig. 10.2). The gene for hGH is isolated from the human pituitary gland cells. 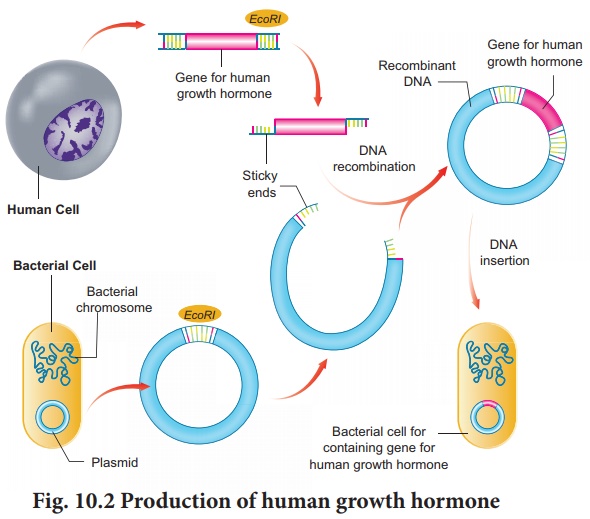 A recombinant form of human growth hormone called somatropin is used as a drug to treat growth disorders in children.

You would have studied in your earlier class that many factors are required for normal blood clotting process and the factor VIII is one of them. The genes for the formation of factor VIII is located in the X chromosome. A genetic defect in the synthesis of factor VIII results in Haemophilia A, a sex-linked disease characterized by prolonged clotting time and internal bleeding (Refer Chapter 4). Clotting factor VIII isolated from blood of normal human being was used in the treatment of Haemophilia A. Requirement of large quantities of blood for this purpose and the risk of transmission of infectious diseases like AIDS is a disadvantage. Recombinant DNA technology was used to produce Recombinant Factor VIII in the Chinese Hamster ovary and in the baby Hamster kidney cells. More recently a cell line of human origin has been used for the first time to produce human blood clotting factor VIII.

Interferons are proteinaceous, antiviral, species specific substances produced by mammalian cells when infected with viruses. Interferons were discovered by Alick Isaacs and Jean Lindemann in 1957. Based on the structure of interferons they are classified as α, β and γ interferons. They stimulate the cellular DNA to produce antiviral enzymes which inhibit viral replication and protect the cells. Similar to factor VIII , interferons could be isolated from blood, but the amount of blood required for isolation of interferons is enormous and not practical. To overcome this issue interferons could be produced by rDNA technology. The yeast Saccharomyces cerevisiae is more suitable for production of recombinant interferons than E.coli, since E.coli does not possess the machinery for glycosylation of proteins. Interferons are used for the treatment of various diseases like cancer, AIDS, multiple sclerosis, hepatitis C and herpes zoster. In spite of the therapeutic applications interferons are not within the reach of the common man due to high cost for its production.

Recombinant DNA technology has been used to produce new generation vaccines.The limitations of traditional vaccine production could be overcome by this approach.

Edible vaccines are prepared by molecular pharming using the science of genetic engineering. Selected genes are introduced into plants and the transgenic plants are induced to manufacture the encoded protein. Edible vaccines are mucosal targeted vaccines which cause stimulation of both systemic and mucosal immune response. At present edible vaccines are produced for human and animal diseases like measles, cholera, foot and mouth disease and hepatitis.

Genetic immunisation by using DNA vaccines is a novel approach that came into being in 1990. The immune response of the body is stimulated by a DNA molecule. A DNA vaccine consists of a gene encoding an antigenic protein,1inserted onto a plasmid, and then incorporated into the cells in a target animal. DNA instructs the cells to make antigenic molecules which are displayed on its surfaces. This would evoke an antibody response to the free floating antigen secreted by the cells. The DNA vaccine cannot cause the disease as it contains only copies of a few of its genes. DNA vaccines are relatively easy and inexpensive to design and produce. 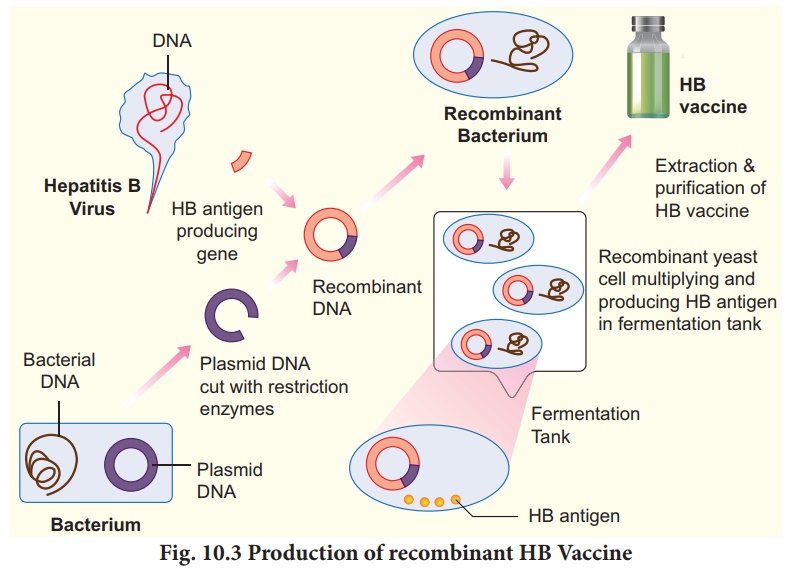 The recombinant vaccine for hepatitis B (HbsAg) was the first synthetic vaccine launched in 1997 which was marketed by trade names Recombivax and Engerix-B. India is the fourth country in the world after USA, France and Belgium to develop an indigenous hepatitis B vaccine.