Technological advances and information gained through in-tense study of genetics have assisted researchers and clinicians in predicting, diagnosing, and treating cancer.

As early as 1914, the somatic mutation theory of cancer sug-gested that cancer develops as a result of inherited or acquired genetic mutations that lead to a disturbance in the normal chro-mosomal balance regulating cell growth and reproduction. Technological advances and information gained through in-tense study of genetics have assisted researchers and clinicians in predicting, diagnosing, and treating cancer. Gene therapy includes approaches that correct genetic defects or manipulate genes to induce tumor cell destruction in the hope of prevent-ing or combating disease. Somatic cell (any cell not contained in an embryo or destined to become an egg or sperm) gene ther-apy is the only publicly funded form of gene therapy in the United States. This type of therapy involves the insertion of a desired gene into the targeted cells. Human germ cell manipu-lation is considered by many to be controversial and a potential source of bioethical concerns (Frankel & Chapman, 2000).

Although gene therapy is currently investigational, researchers predict it will have a profound impact on medical and health care in the 21st century. More than 100 clinical trials for gene ther-apy in treating cancer have been initiated. An example of one such trial involves inserting the p53 tumor suppressor gene into cancer cells. Normally this gene is responsible for repairing dam-aged cells or causing cell death when the cell cannot be repaired. Many types of cancer cells have mutated p53 genes that then lead to uncontrolled cell growth. Insertion of normal p53 genes can lead to either cancer cell death or slowing of tumor growth. This approach has been tested in lung, head and neck, and colon can-cers (Wasil & Buchbinder, 2000). In another clinical trial, a “sui-cide gene” is inserted into tumor cells to facilitate cell death. When the gene for herpes simplex virus thymidine kinase is in-serted into malignant cells, those cells become infected with the virus and susceptible to destruction by antiviral drugs, such as ganciclovir. This approach has been tried in treating brain, ovarian, and breast cancers (Fibison, 2000). For more information about investigational therapies, see Chart 16-4. 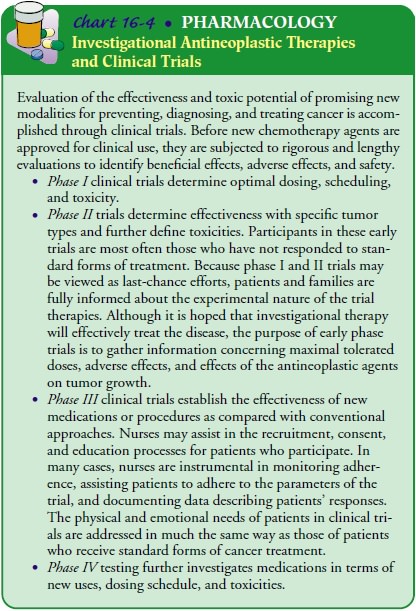