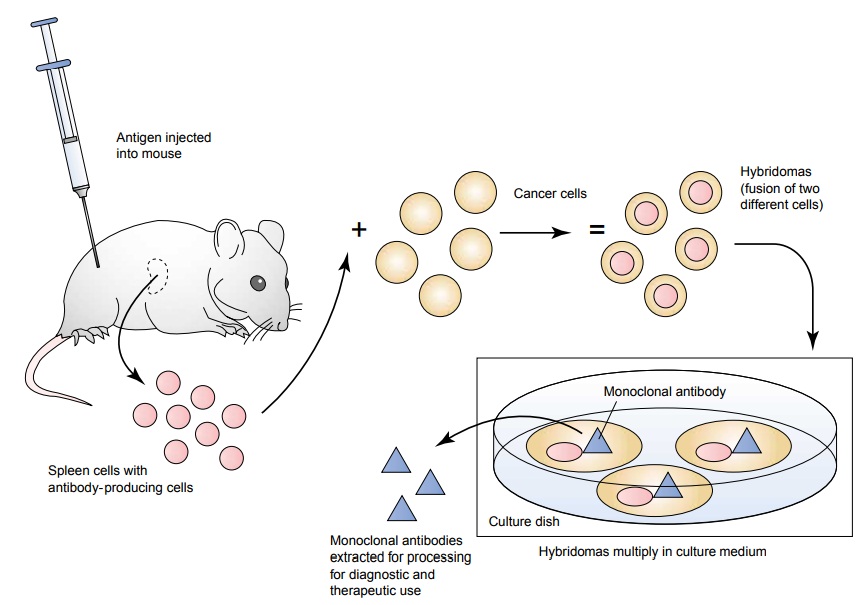 Biologic response modifier (BRM) therapy involves the use ofnaturally occurring or recombinant (reproduced through genetic engineering) agents or treatment methods that can alter the im-munologic relationship between the tumor and the cancer patient (host) to provide a therapeutic benefit.

Biologic response modifier (BRM) therapy involves the use ofnaturally occurring or recombinant (reproduced through genetic engineering) agents or treatment methods that can alter the im-munologic relationship between the tumor and the cancer patient (host) to provide a therapeutic benefit. Although the mechanisms of action vary with each type of BRM, the goal is to destroy or stop the malignant growth. The basis of BRM treatment lies in the restoration, modification, stimulation, or augmentation of the body’s natural immune defenses against cancer.

Some of the early investigations of the stimulation of the immune system involved nonspecific agents such as Bacille Calmette-Guérin (BCG) and Corynebacterium parvum. When injected into the patient, these agents serve as antigens that stimulate an im-mune response. The hope is that the stimulated immune system will then eradicate malignant cells. Extensive animal and human investigations with BCG have shown promising results, especially in treating localized malignant melanoma. Additionally, BCG is considered to be a standard form of treatment for localized blad-der cancer. Use of nonspecific agents in advanced cancer remainslimited, however, and research is continuing in an effort to iden-tify other uses and other agents.

Monoclonal antibodies (MoAbs), another type of BRM, became available through technological advances, enabling investigators to grow and produce specific antibodies for specific malignant cells. Theoretically, this type of specificity allows the MoAb to de-stroy the cancer cells and spare normal cells. The production of MoAbs involves injecting tumor cells that act as antigens into mice. Antibodies made in response to injected antigens can be found in the spleen of the mouse. Antibody-producing spleen cells are combined with a cancer cell that has the ability to grow indefinitely in culture medium and continue producing more anti-bodies. The combination of spleen cells and the cancer cells is re-ferred to as a hybridoma. From hybridomas that continue to grow in the culture medium, the desired antibodies are harvested, pu-rified, and prepared for diagnostic or therapeutic use (Fig. 16-5). Alternative methods of producing MoAbs using human or ge-netically engineered sources are under investigation. 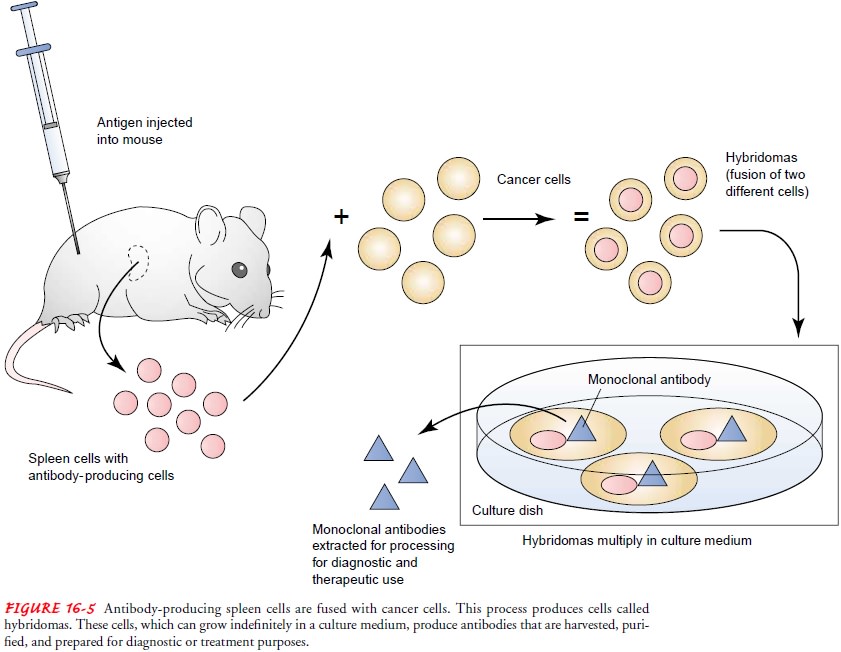 MoAbs are being used as aids in diagnostic evaluation. By at-taching a radioactive substance to the MoAb, physicians can detect both primary and metastatic tumors through radiologic techniques. This process is referred to as radioimmunodetection. OncoScint (Cytogen Corp., Princeton, NJ) is a U.S. Food and Drug Admin-istration (FDA)-approved MoAb that is used to assist in diagnos-ing ovarian and colorectal cancers. The use of MoAbs in detecting breast, gastric, and prostate cancers and lymphoma is under inves-tigation. MoAbs are also used in purging residual tumor cells from the bone marrow or peripheral blood of patients who are under-going BMT for peripheral stem cell rescue after high-dose cyto-toxic therapy.

DeMeyer, 2002). Gemtuzumab ozogomicin (Mylotarg) is a combination of a MoAb and the antitumor antibiotic calichea-micin, which is used for the treatment of a specific type of acute myeloid leukemia (Sorokin, 2000). Gemtuzumab ozogomicin is an example of immunoconjugate therapy or a “magic bullet” that transports cancer-killing substances to the cancer cells. Ibritumomab-tiuxetan (Zevalin) is another form of immuno-conjugate therapy that combines a monoclonal antibody and a radioactive source for the treatment of specific types of non-Hodgkin’s lymphoma. The monoclonal antibody delivers the radioactive source to the malignant cells, causing the cells to be destroyed by both radioactivity and normal immune responses (Estes, 2002). Researchers are continuing to explore the develop-ment and use of other MoAbs either alone or in combination with other substances such as radioactive materials, chemothera-peutic agents, toxins, hormones, or other BRMs.

Cytokines, substances produced by cells of the immune system toenhance the production and functioning of components of the immune system, are also the focus of cancer treatment research. Cytokines are grouped into families, such as interferons, interleukins, colony-stimulating factors, and tumor necrosis factors (TNFs).

Interferons (IFNs) are examples of cytokines with both antiviral and antitumor properties. When stimulated, all nucleated cells are capable of producing these glycoproteins, which are classified according to their biologic and chemical properties: IFN-α is produced by leukocytes, IFN-β is produced by fibroblasts, and IFN-γ is produced by lymphocytes.

Although the exact antitumor effects of IFNs have not been thoroughly established, it is thought that they either stimulate the immune system or assist in preventing tumor growth. The anti-tumor effects are dependent on the type of IFN and the disease for which IFN is being used. IFNs enhance both lymphocyte and antibody production. They also facilitate the cytolytic or cell destruction role of macrophages and natural killer cells. Addi-tionally, IFNs can inhibit cell multiplication by increasing the duration of various phases of the cell cycle.

The effects of IFN have been demonstrated in a variety of malignancies. IFN-α has been approved by the FDA for treat-ing hairy-cell leukemia, Kaposi’s sarcoma, chronic myelogenous leukemia, high-grade non-Hodgkin’s lymphoma, and melanoma. Other positive responses have been seen in hematologic malig-nancies and renal carcinomas. IFN-α, IFN-β, and IFN-γ have been approved by the FDA for the treatment of several non-malignant diseases. IFN is administered through subcutaneous, intramuscular, intravenous, and intracavitary routes. Efforts are underway to establish the effectiveness of IFN for various malig-nancies in combination with other treatment regimens.

Interleukins are a subgroup of cytokines known as lymphokines and monokines because they are primarily produced by lympho-cytes and monocytes. About 15 different interleukins have been identified. They act by signaling and coordinating other cells of the immune system. The FDA has approved interleukin-2 (IL-2) as a treatment option for renal cell cancer and metastatic melanoma in adults. Originally referred to as T-cell growth factor, IL-2 is known to stimulate the production and activation of several dif-ferent types of lymphocytes. In addition, IL-2 enhances the pro-duction of other types of cytokines and plays a role in influencing both humoral and cell-mediated immunity.

Clinical trials are beng conducted on IL-2 as well as other in-terleukins, such as IL-1, IL-4, and IL-6, for their roles in treating other cancers. Some early-stage clinical trials are assessing the ef-fects of interleukins in combination with chemotherapy. In ad-dition, interleukins are being investigated for their role as growth factors for treating myelosuppression after the use of some forms of chemotherapy.

Hematopoietic growth factors, also known as colony-stimulating factors, are hormone-like substances naturally produced by cells within the immune system. Hematopoietic growth factors of dif-ferent types regulate the production of all cells in the blood, in-cluding neutrophils, macrophages, monocytes, red blood cells, and platelets. FDA approval of GM-CSF, G-CSF, IL-11, and EPO (Epogen) has contributed significantly to the supportive care of patients with cancer.

Although these agents do not treat the underlying malig-nancy, they do target the effects of myelotoxic cancer therapies (adversely affecting the bone marrow), such as radiation and chemotherapy. Previously, the myelotoxic or bone marrow sup-pressive effects of chemotherapy had imposed limits on some chemotherapy agents and contributed to the development of life-threatening infections.

GM-CSF is used to treat the neutropenia (decreased numbers of neutrophils in the blood) associated with BMT. G-CSF is used to treat neutropenia associated with chemotherapy for solid tumor malignancies. IL-11 is used to prevent severe thrombocy-topenia and reduce the need for platelet transfusions in patients following myelosuppressive therapy for nonmyeloid cancers. EPO is used to treat anemia in cancer patients as well as in pa-tients with chronic renal disease and in patients with HIV infec-tion with zidovudine-induced anemia. Other growth factors, such as macrophage colony-stimulating factor and IL-3, are being investigated.

TNF is a cytokine naturally produced by macrophages, lympho-cytes, astrocytes, and microglial cells of the brain. The exact role of TNF is still under investigation. In vitro studies have shown TNF to stimulate other cells of the immune response; in animal studies it has been shown to have direct tumor-killing activity. Clinical trials using systemic TNF have been halted because of severe toxicities (Pazadur, Coia, Hoskins & Wagman, 2001). Cur-rent clinical trials are examining local administration of TNF for patients with sarcomas and melanomas of the extremities.

Retinoids are vitamin A derivatives (retinol, all-trans-retinoic acid, and 13-cis-retinoic acid) that play a role in growth, repro-duction, epithelial cell differentiation, and immune function. All-trans-retinoic acid (tretinoin) has been granted FDA approval fortreating acute promyelocytic leukemia, a rare form of leukemia. Retinoids are being tested for treating both hematologic cancers and solid tumors and for preventing a variety of cancers (Evans & Kaye, 1999; Kelloff, 2000; Kurie, 1999).

Patients receiving BRM therapy have many of the same needs as cancer patients undergoing other treatment approaches. How-ever, some BRM therapies are still investigational and considered a last-chance effort by many patients who have not responded to standard treatments. Consequently, it is essential that the nurse assess the need for education, support, and guidance for both the patient and family and assist in planning and evaluating pa-tient care.

Nurses need to be familiar with each agent given and the poten-tial effects (Table 16-7). Adverse effects, such as fever, myalgia, nausea, and vomiting, as seen with IFN therapy, may not be life-threatening. However, nurses must be aware of the impact of these side effects on the patient’s quality of life. Other life-threatening adverse effects (eg, capillary leak syndrome, pulmonary edema, and hypotension) may occur with IL-2 therapy. Nurses must work closely with physicians to assess and manage potential toxicities of BRM therapy. Because of the investigational nature of many of these agents, the nurse will be administering them in a research setting. Accurate observations and careful documen-tation are essential components of patient assessment and data collection. 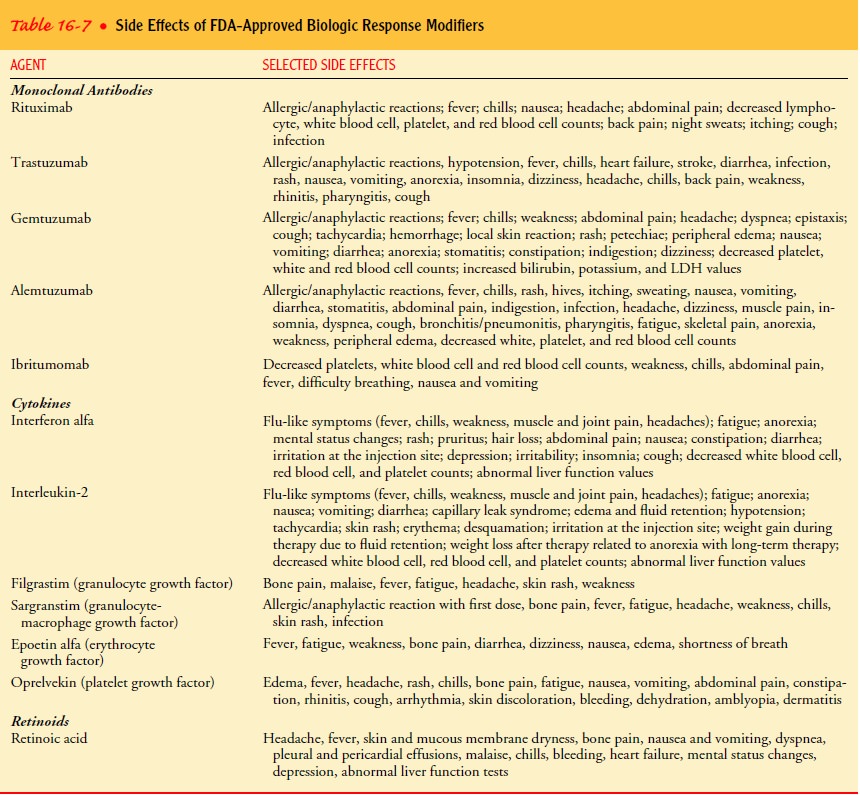 Some BRMs, such as IFN, EPO,and G-CSF, can be administered by the patient or family in the home. Nurses teach patients and families, as needed, how to ad-minister these agents through subcutaneous injections. Further, they provide instructions about side effects and assist patients and families to identify strategies to manage many of the common side effects of BRM therapy, such as fatigue, anorexia, and flu-like symptoms.

Referral for home care is usually indicated tomonitor the patient’s responses to treatment and continue and reinforce teaching. During home visits, the nurse assesses the pa-tient’s and family’s technique in administering medications. The nurse collaborates with physicians, third-party payors, and phar-maceutical companies to help patients obtain reimbursement for home administration of BRM therapies. The nurse also reminds patients about the importance of keeping follow-up appoint-ments with the physician and assesses the patient’s need for changes in care.