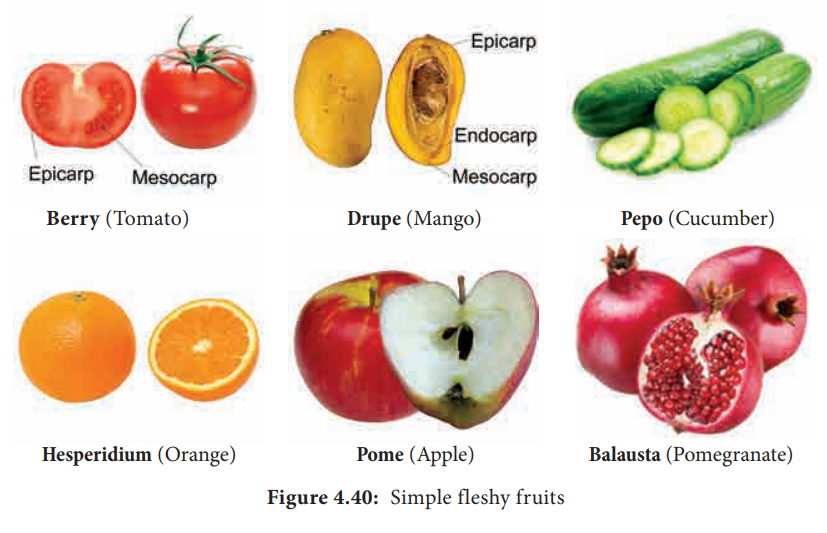 The branch of horticulture that deals with the study of fruits and their cultivation is called pomology.

We know about several kinds of fruits, but by botanical study we will be surprised to know the types of fruits and how they are produced by plants. Fruits are the products of pollination and fertilization, usually containing seeds inside. In common person perpective a fruit may be defined as an edible product of the entire gynoecium and any floral part which is sweet, juicy or fleshy, coloured, aromatic and enclosing seeds. However the fruit is a fertilized and ripened ovary. The branch of horticulture that deals with the study of fruits and their cultivation is called pomology.

Fruit has a fruit wall. It is otherwise called pericarp . It is differentiated into outer epicarp, middle mesocarp and inner endocarp. The inner part of the fruit is occupied by the seed.

Fruits are classified into various types:

The fruits are derived from a single ovary of a flower Example: Mango, Tomato. Simple fruits are classified based on the nature of pericarp as follows

The fruits are derived from single pistil where the pericarp is fleshy, succulent and differentiated into epicarp, mesocarp and endocarp. It is subdivided into the following. 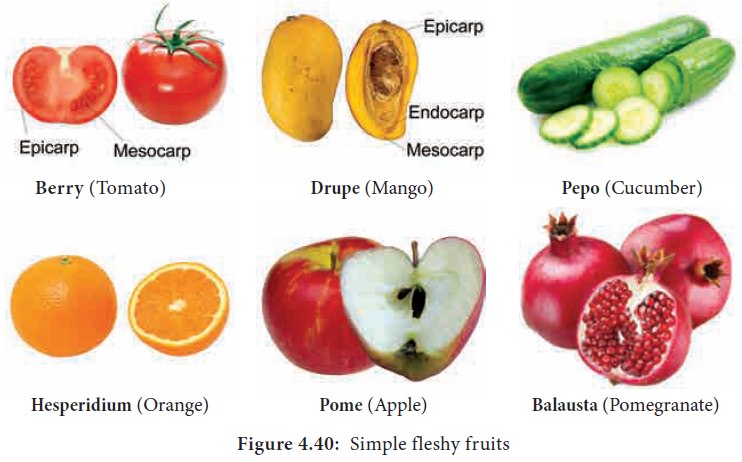 a)  Berry: Fruit develops from bicarpellary or multicarpellary, syncarpous ovary. Here the epicarp is thin, the mesocarp and endocarp remain undifferentiated. They form a pulp in which the seeds are embedded. Example: Tomato, Date Palm, Grapes, Brinjal.

b) Drupe: Fruit develops from monocarpellary, superior ovary. It is usually one seeded. Pericarp is differentiated into outer skinny epicarp, fleshy and pulpy mesocarp and hard and stony endocarp around the seed. Example: Mango, Coconut.

e) Pome: It develops from multicarpellary, syncarpous, inferior ovary. The receptacle also develops along with the ovary and becomes fleshy, enclosing the true fruit. In pome the epicarp is thin skin like and endocarp is cartilagenous. Example: Apple, Pear.

f) Balausta: A fleshy indehiscent fruit developing from multicarpellary, multilocular inferior ovary whose pericarp is tough and leathery. Seeds are attached irregularly with testa being the edible portion. Example: Pomegranate.

They develops from single ovary where the pericarp is dry and not differentiated into epicarp, mesocarp and endocarp. It is further subdivided into three types.

Pericarp is dry and splits open along the sutures to liberate seeds. They can be classified into following types. 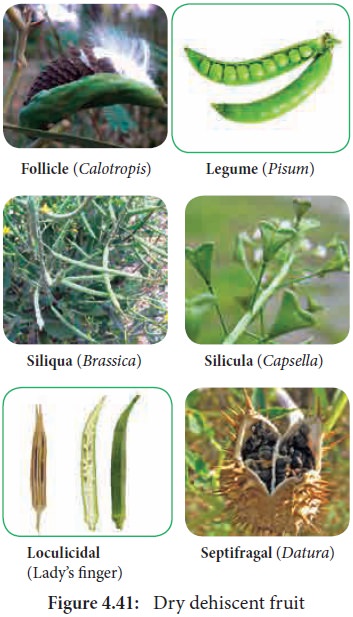 a)       Follicle: Fruit develops from monocarpellary, superior ovary and dehisces along one suture. Example: Calotropis.

b)       Legumeorpod:Fruit develops from monocarpellary, superior ovary and dehisces through both dorsal and ventral sutures. Example: Pisum.

e)        Capsule: Fruit develops from multicarpellary, syncarpous, superior ovary. Based on the dehiscence pattern they are sub divided into.

vi)     Circumscissile: (pyxidium) Dehisces transversely so that top comes off as a lid or operculum. Example: Anagallis arvensis, Portulaca, Operculina.

Dry fruit which does not split open at maturity. It is subdivided into. 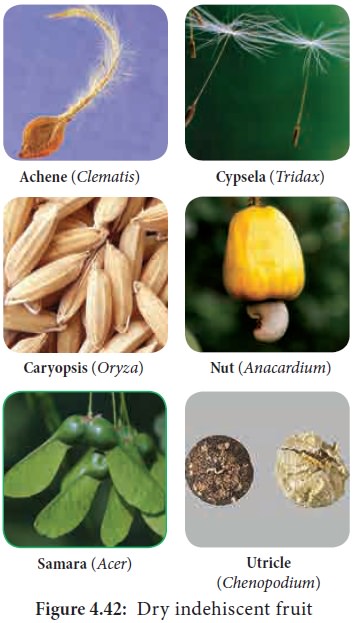 c)        Caryopsis: It is a one seeded fruit which develops from a monocarpellary, superior ovary. Pericarp is inseparably fused with seed. Example: Oryza, Triticum.

d)       Nut: They develop from mulicarpellary, syncarpous, superior ovary with hard, woody or bony pericap. It is a one seeded fruit. Example: Quercus, Anacardium.

e)        Samara: A dry indehiscent, one seeded fruit in which the pericarp devlops into thin winged structure around the fruit. Example: Acer, Pterocarpus.

This fruit type is intermediate between dehiscent and indehiscent fruit. The fruit instead of dehiscing rather splits into number of segments, each containing one or more seeds. They are of following types. 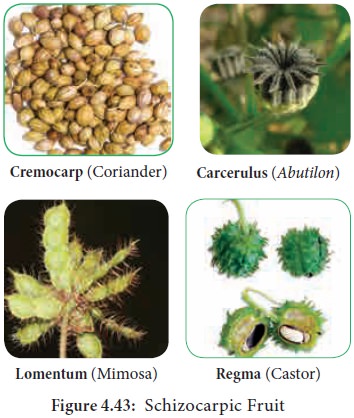 c)        Lomentum: The fruit is derived from monocarpellary, unilocular ovary. A leguminous fruit, constricted between the seeds to form a number of one seeded compartments that separate at maturity. Example: Desmodium, Mimosa

Aggregate fruits develop from a single flower having an apocarpous pistil. each of the free carpel is develops into a simple fruitlet. A collection of simple fruitlets makes an aggregate fruit. An individual ovary develops into a drupe, achene, follicle or berry. An aggregate of these fruits borne by a single flower is known as an etaerio. Example: Magnolia, Raspberry, Annona, Polyalthia. 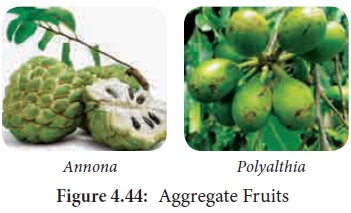 A Multiple or composite fruit develops from the whole inflorescence along with its peduncle on which they are borne. 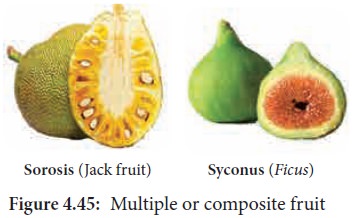 a)   Sorosis: A fleshy multiple fruit which develops from a spike or spadix. The flowers fused together by their succulent perianth and at the same time the axis bearing them become fleshy or juicy and the whole inflorescence forms a compact mass. Example: Pineapple, Jack fruit, Mulberry

2.        They are source of many chemicals like sugar, pectin, organic acids, vitamins and minerals.

3.        The fruit protects the seeds from unfavourable climatic conditions and animals.

4.        Both fleshy and dry fruits help in the dispersal of seeds to distant places.

5.        In certain cases, fruit may provide nutrition to the developing seedling. 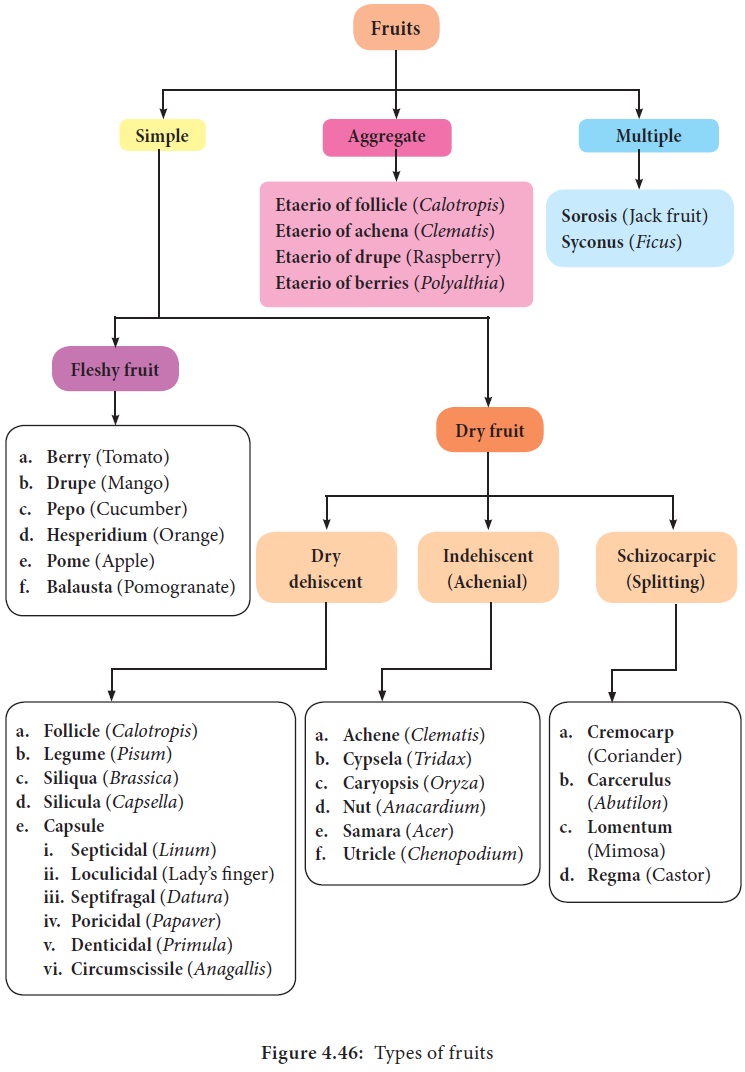 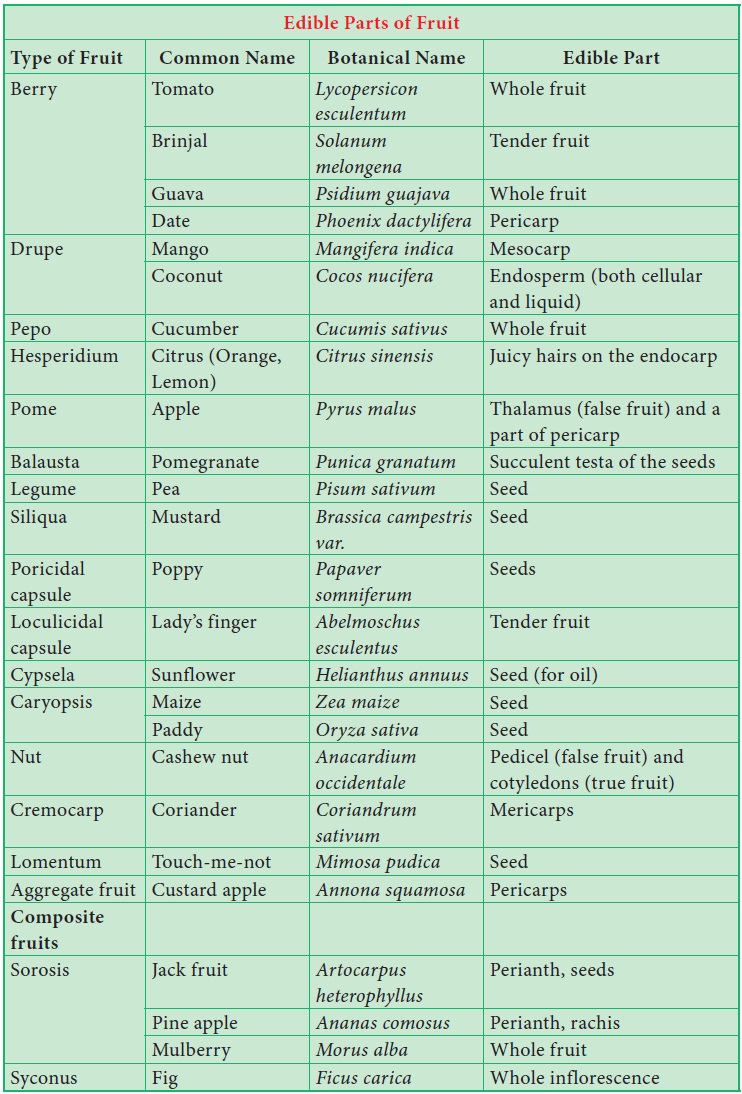