Flower and Parts of flower

The flower is a significant diagnostic feature of angiosperms.

In a plant, which part would you like the most? Of course, it is a flower, because of its colour and fragrance. The flower is a significant diagnostic feature of angiosperms. It is a modified condensed reproductive shoot. The growth of the flower shoot is determinate. 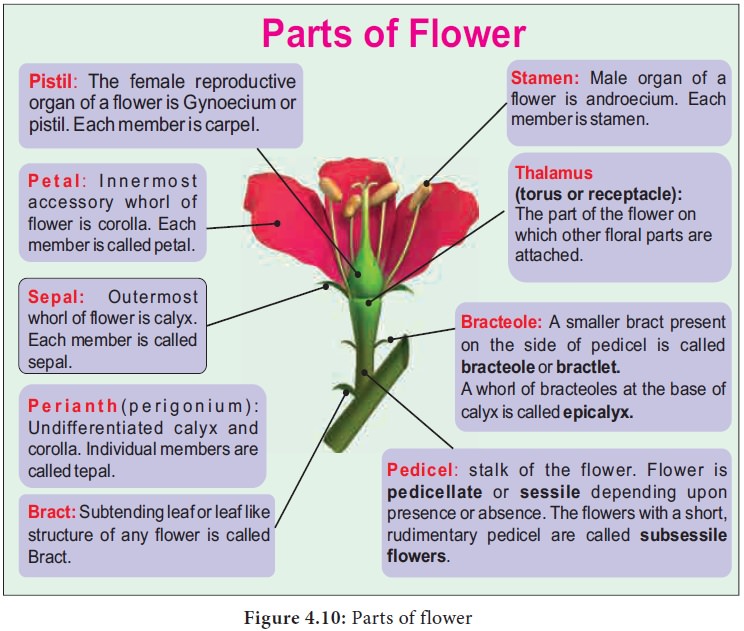 There are two whorls, accessory and essential. Accessory whorl consists of calyx and corolla and essential whorl comprises of androecium and gynoecium.

Flower is said to be Complete when it contains all four whorls. An Incomplete flower is devoid of one or more whorls.

Flower sex refers to the presence or absence of androecium and gynoecium within a flower.

1. Perfect or bisexual(monoclinous): When a flower contains both androecium and gynoecium is called perfect flower.

2. Imperfect or unisexual (diclinous): When the flower contains only one of the essential whorls is called Imperfect flower. It is of two types:

Plant sex refers to the presence and distribution of flowers with different sexes in an individual plant.

1    Hermaphroditic: All the flowers of the plant are bisexual.

2    Monoecious (mono-one; oikos-house): Both male and female flowers are present in the same plant Example: Coconut.

4          Polygamous: The condition in which bisexual and unisexual (staminate/ pistillate) flowers occur in a same plant is called polygamous. It is of several types. See box. Example: Musa, Mangifera.

Andromonoecious: A plant with both male flowers and bisexual flowers.

Gynomonoecious: A plant with both pistillate and bisexual flowers.

Polygamomonoecious: A plant with pistillate, staminate and bisexual flowers. It is also called trimonoecious.

Androdioecious: A plant with staminate flowers on one individual and bisexual flower on other individual

Trioecious: A plant with staminate,pistillate and bisexual flowers on different individuals

1. Actinomorphic (or) radial or polysymmetric: The flower shows two mirror images when cut in any plane or radius through the centre.Normally there are more than two planes of symmetry. Example: Hibiscus, Datura, water lily.

3. Asymmetric (amorphic): Flower lacks any plane of symmetry and cannot be divided into equal halves in any plane. Parts of such flowers are twisted. Example: Canna indica.