At the same time population growth increased at such a rate in less developed countries. Every 40 million people die of undernourishment and malnutrition.

During the last 50 years world grain production has increased almost three times. The per capita production is increased by about 50%.

At the same time population growth increased at such a rate in less developed countries. Every 40 million people die of undernourishment and malnutrition.

This means that every year our food problem is killing as many people as were killed by the atomic bomb dropped on Hiroshima during World War II.

This statistics emphasize the need to increase our food production, and also to control population growth.

It is estimated that 300 millions are still undernourished.

2 Impacts of overgrazing and agriculture

Overgrazing can limit livestock production. Over grazing occurs when too many animals graze for too long and exceed the carrying capacity of a grass land area.

Land degradation: Overgrazing removes the grass cover. The humus content of the soil is decreased and it leads to poor, dry, compacted soil.

Soil erosion: The soil roots are very good binders of soil. When the grasses are removed, the soil becomes loose and susceptible to the action of wind and water.

Loss of useful species: Due to overgrazing the nutritious species like cenchrus, panicum etc. are replaced by thorny plants like Parthenium, Xanthium etc. These species do not have a good capacity of binding the soil particles and, therefore, the soil becomes more prone to soil erosion.

Traditional Agriculture and its impacts

Organic fertilizer and a mix of crops

2.4 Modern Agriculture and its impacts

It makes use of hybrid seeds of selected and single crop variety.

High-tech equipments, lots of energy subsidies in the form of fertilizers and, pesticides Irrigation water

Impacts related to high yielding verities (HYV): The uses of HYVs encourage monoculture i.e. the same genotype is grown over vast areas. In case of an attack by some pathogen, there is total devastation of the crop by the disease due to exactly uniform conditions, which help in rapid spread of the disease.

Nitrate Pollution: Nitrogenous fertilizers applied in the fields often leach deep into the soil and ultimately contaminate the ground water. The nitrates get concentrated in the water and when their concentration exceeds 25 mg/L, they become the cause of a serious health hazard called "Blue Baby

Syndrome" or methaemoglobinemia. This disease affects the infants to the maximum extent causing even death. 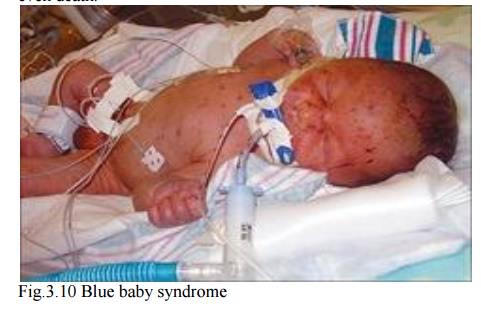 Eutrophication: A large proportion of nitrogen and phosphorus used in crop fields is washed off along with runoff water and reach the water bodies causing over nourishment of the lakes, a process known as Eutrophication. (Eu=more, tropic=nutrition). Due to Eutrophication the lakes get invaded by algal blooms. These algal species grow very fast by rapidly using up the nutrients. The algal species quickly complete their life cycle and die thereby adding a lot of dead matter. The fishes are also killed and there is lot of dead matter that starts getting decomposed. Oxygen is consumed in the process of decomposition and very soon the water gets depleted of dissolved oxygen. This further affects aquatic fauna and ultimately anaerobic conditions are created where only pathogenic anaerobic bacteria can survive. Thus, due to excessive use of fertilizers in the agricultural fields the lake ecosystem gets degraded. 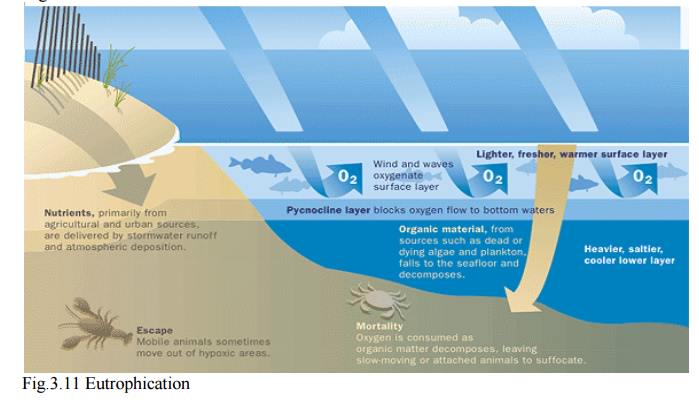 Pesticide related problems: Thousands of types of pesticides are used in agriculture. The first generation pesticides include chemicals like sulphur, arsenic, lead or mercury to kill the pests. They have number of side effects as discussed below:

Creating resistance in pests and producing new pests: About 20 species of pests are now known which have become immune to all types of pesticides and are known as "Super pests". 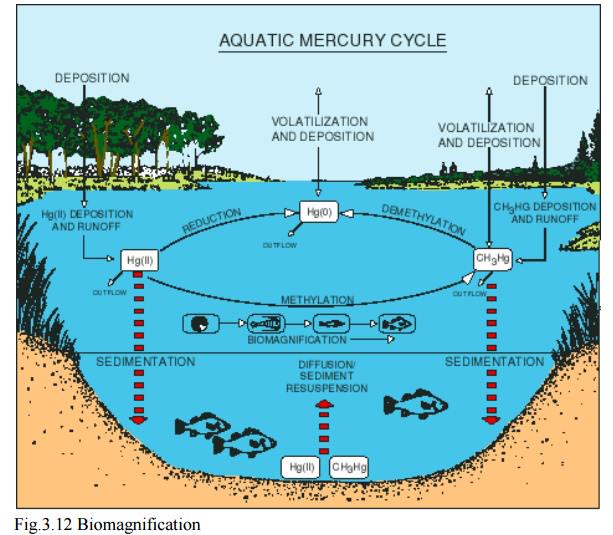 Water Logging: Over irrigation of croplands by farmers for good growth of their crop usually leads to water logging. Inadequate drainage caused excess water to accumulate underground and gradually forms a continuous column with the water table. Under water-logged conditions, pore-spaces in the soil get fully drenched with water and the soil- air gets depleted. The water table rises while the roots of plants do not get adequate air for respiration, Mechanical strength of the soil declines, the crop plants get lodged and crop yield falls. In Punjab and Haryana, extensive areas have become water-logged due to adequate canal water supply or tube-well water. Preventing excessive irrigation, sub-surface drainage technology and bio-drainage with trees like Eucalyptus are some of the remedial measures to prevent water-logging.

Salinity Problem: At present one third of the total cultivable land area of the world is affected by salts. Saline soils are characterized by the accumulation of soluble salts like sodium chloride, sodium sulphate, calcium chloride, magnesium chloride etc. in the soil profile. Their electrical conductivity is more than 4 ds/m. So dic soils have carbonates and bicarbonates of sodium, the pH usually exceed 8.0 and the exchangeable sodium percentage (ESP) is more than 15%.

(i) The most common method for getting rid of salts is to flush them out by applying more good quality water to such soils.

(ii) Another method is laying underground network of perforated drainage pipes for flushing out the salts slowly.

Salinity and water logging in Punjab, Haryana and Rajasthan:

The first alarming report of salt-affected wasteland formation due to irrigation practices came from Haryana in 1858.

Several villages in Panipat, and Delhi lying in Western Yamuna Canal were suffering from salinity problems.

Introduction to canal irrigation in 3.3 m ha in Haryana resulted in raise in water table followed by water-logging and salinity in many irrigated areas as a result of fall in crop productivity.

Rajasthan too has suffered badly in this regard following the biggest irrigation project "Indhra Gandhi Canal Project".