The study of fermentation and its practical uses is named as Zymology.

In 1856 fermentation, reaction was first demonstrated by Louis Pasteur in yeast. The study of fermentation and its practical uses is named as Zymology. Any energy releasing metabolic process that takes place only under anaerobic condition is called fermentation. It can also be defined as a metabolic process that release energy from a sugar or other organic molecule. It does not require oxygen or an electron transport system, and uses an organic molecule as the final electron acceptor. Fermentation reaction yields only a small amount of energy (2 ATP).

Anaerobes do not use an electron transport chain to oxidize NADH to NAD+ and therefore use fermentation as alternative method to maintain a supply of NAD+ for the proper function of normal metabolic pathways. Facultative anaerobes can use fermentation under anaerobic condition and carryout aerobic respiration when oxygen is present. Fermentation reoxidizes NADH to NAD+ by converting pyruvic acid into various organic acids.

During fermentation, NADH is converted back into the coenzyme NAD+ so that it can be used again for Glycolysis (Figure 4.9). Organic electron acceptors such as pyruvate or acetaldehyde react with NADH to form NAD+, producing CO2 and organic solvent like ethanol. Fermentation can be classified as Lactic acid fermentation and alcohol fermentation. 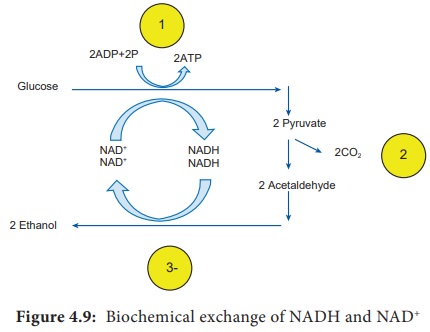 Aquifex (water maker) of Aquificae is a diverse collection of bacteria that live in harsh environmental settings.These can produce water by oxidizing hydrogen.

During Glycolysis, in the first step of lactic acid fermentation, a molecule of glucose is oxidized to 2 molecules of pyruvic acid and it generates the energy. In the next step pyruvic acid is reduced by NADH to form lactic acid. Lactobacillus and Streptococcus are some of the lactic acid producing genera (Figure 4.10). 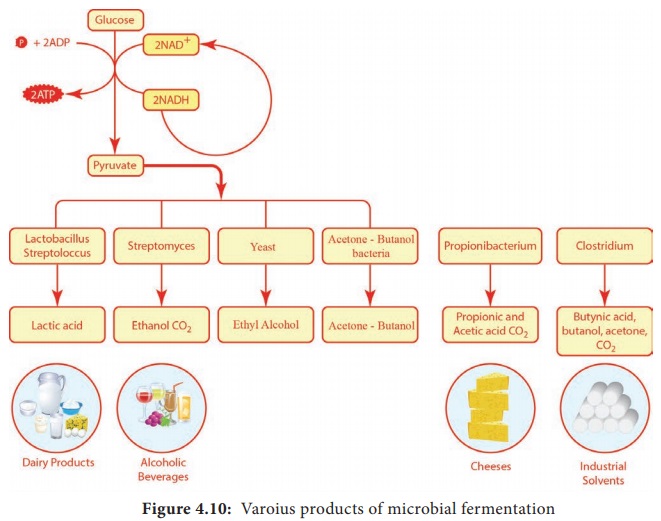 Milk is converted into fermented products such as curd, yogurt and cheese. The fermentation of lactose in milk by these bacteria produces lactic acid which acts on milk protein to give yogurt its texture and characteristic tart flavour. Here lactase enzyme is produce by the bacteria which convert the lactose into lactic acid.Builds up of Lactic acid in muscle cells causes muscle cramp.

In this type of fermentation, organism produces lactic acid alone. So it is referred to as homolactic fermentation.

In this type of fermentation, organism produces Lactic acid as well as other acids or alcohol. So it is known as hetero fermentation or heterolactic and often uses the pentose phosphate pathway.

HOTS: Why do cells need to ferment when they get 2ATPs from Glycolysis?