Most microorganisms oxidize carbohydrates as their primary source of cellular energy.

Most microorganisms oxidize carbohydrates as their primary source of cellular energy. Carbohydrate catabolism is the breakdown of carbohydrate molecule to produce energy and is therefore of great importance in cell metabolism. Glucose is the most common carbohydrate energy source used by cells.

The aerobic respiration of glucose typically occurs in three principal stages. They are

Glycolysis is the process of splitting of sugar molecule, where the glucose is enzymatically degraded to produce ATP. Glycolysis is the oxidation of glucose to pyruvic acid with simultaneous production of some ATP and energy containing NADH. It takes place in the cytoplasm of both prokaryotic and eukaryotic cells. Glycolysis occurs in the extra mitochondrial part of the cell cytoplasm. Glycolysis was discovered by Emden, Meyerhof and Parnas. So, this cycle is shortly termed as EMP pathway, in honour of these pioneer workers. This cycle occurs in animals, plants and large number of microorganisms. Glycolysis does not require oxygen, it can occur under aerobic or anaerobic condition. Glycolysis is a sequence of ten enzyme catalyzed reactions.

Since glucose is a six carbon molecule and pyruvate is a three carbon molecule, two molecules of pyruvate are produced for each molecule of glucose that enters Glycolysis. Net energy production from each glucose molecule is two ATP molecules

The Glycolysis pathway consists of two phases. They are

1. The preparatory/Investment phase, where ATP is consumed 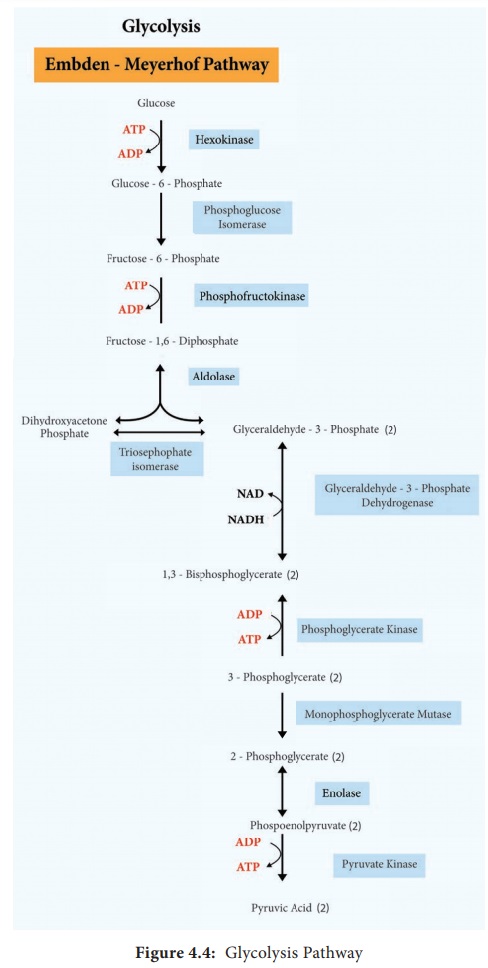 1. In the preparatory stage, two molecules of ATP are utilized and then glucose is phosphorylated, restructured, and split into two 3 carbon compounds namely Glyceraldehyde-3-phosphate and Dihydroxyacetone phosphate.

2. In pay off phase or energy conserving stage, the two 3 carbon molecules are oxidized in several steps to 2 molecules of pyruvic acid and two molecules of NAD+ are reduced to NADH, thus four molecules of ATP are formed by substrate level phosphorylation.

Many bacteria have another pathway in addition to Glycolysis for the oxidation of glucose. Some of the common pathways that occur in most of the bacteria are

Strips used in Glu- cometer a chemical called glucose oxidase which reacts with the glucose in the blood sample and is con-verts it into an acid called gluconic acid.