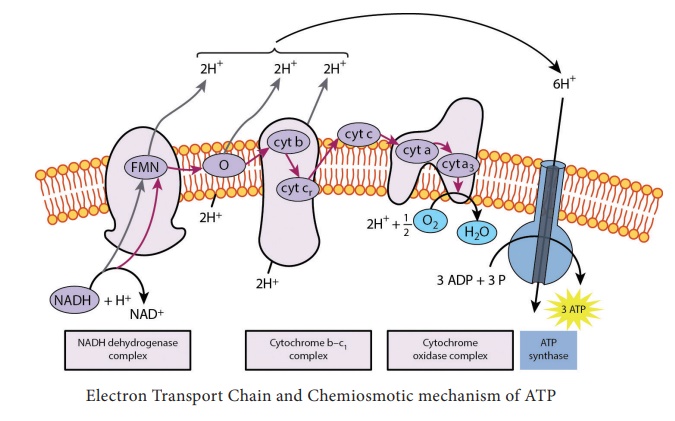 An electron transport chain consists of a sequence of carrier molecules that are capable of oxidation and reduction.

An electron transport chain consists of a sequence of carrier molecules that are capable of oxidation and reduction. In Eukaryotic cell, the ETC is contained in the inner membrane of mitochondria or chloroplast membrane, whereas in prokaryotic cells, it is found in plasma membrane or cytoplasmic membrane.

The ETC is carried out through a series of electron transporters embedded in the inner mitochondrial membrane that transfer electrons from electron donors NADH and FADH2 to acceptor such as molecular Oxygen. In the process, protons are pumped from the mitochondrial matrix to the inner membrane space, and eventually combine with O2 and H+ to form water (Figure 4.6). 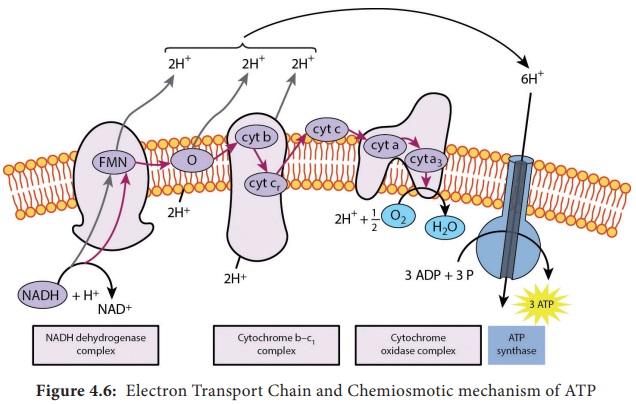 HOTS: Why each NADH makes 3 ATPs and each FADH2 makes 2 ATPs?

As the electrons flow through the chain, much of their free energy is conserved in the form of ATP. The process by which energy from electron transport is used to make ATP is called as oxidative phosphorylation. Respiratory chain is an electron transport chain where a pair of electrons or hydrogen atoms containing electron from the substrate oxidized is coupled to reduction of oxygen to water. The mitochondrial system is arranged into three complexes of electron carriers.

1. Flavoproteins: These proteins contain flavin, a coenzyme derived from riboflavin (Vit B12). One important flavoprotein is flavin mono nucleotide.

3. Cytochromes: These are proteins with iron containing group, capable of existing alternately as reduced (Fe2+) and oxidized form (Fe3+). Cytochromes involved in ETC include cyt (b),cyt c1, cyt c, cyt a, cyt a3.

The first step in electron transport chain is the transfer of high energy electrons from NADH to FMN. This transfer actually involves the passage of hydrogen atom with 2 e− to FMN, which then picks up an additional H+ from the surrounding aqueous medium.

As a result of the first transfer, NADH is oxidized to NAD+, and FMN is reduced to FMNH2.

In the second step, FMNH2 passes 2 H+ to the other side of the mitochondrial membrane and passes 2 e− to coenzyme Q. As a result, FMNH2 is oxidized to FMN. Coenzyme Q also picks up additional 2H+ from the surrounding aqueous and releases to other side of the membrane.

In the next step, electrons are passed successively from coenzyme Q to cyt b1, cyt c1, cyt c, cyt a, cyt a3. Each cytochrome in the chain is reduced, as it picks up electrons and is oxidized as it gives up electrons. The last cytochrome cyt a3 passes its electrons to molecular O2 which picks up protons from the surrounding medium to form H2O.

Chemiosmotic mechanism of ATP synthesis was first proposed by the Biochemist, Peter Mitchell in 1961. In ETC, when energetic electrons from NADH pass down the carriers, some of the carriers (proton pumps) in the chain pump [actively transport] protons across the membrane to inner membrane space. Thus in addition to a concentration gradient, an electrical charge gradient is created. The resulting electro chemical gradient has potential energy called proton motive force.

The proton diffuses across the membrane through protein channels that contain an enzyme called ATP synthase. When this flow occurs, energy is released and is used by the enzyme to synthesize ATP from ADP and phosphate.

At the end of the chain, electrons join with protons and O 2 in the matrix fluid to form H2O. Thus O2 is the final electron acceptor. ETC also operates in photophosphorylation and is located in thylakoid membrane of Cyanobacteria (BGA), and of eukaryotic chloroplasts. 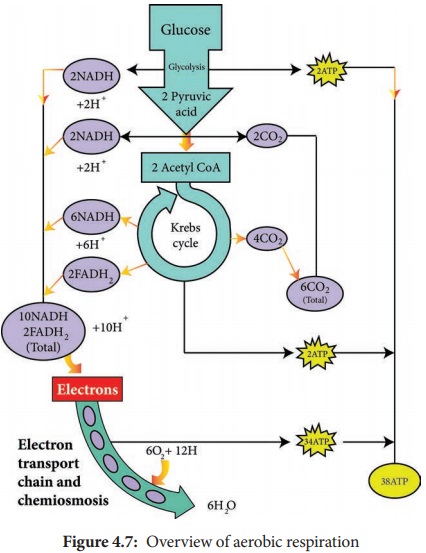 • Electron transport chain regenerates NAD and FAD which can be used again in Glycolysis and Krebs cycle.

• A total of 38 ATP molecules is generated from one molecule of glucose oxidized in prokaryotes, whereas in eukaryotes, 36 molecules of ATP is generated because in eukaryotes, some energy is lost when electrons are shuttled across the mitochondrial membranes that separate Glycolysis (in the cytoplasm) from the electron transport chain (Table 4.2). There is no such separation exists in prokaryotes. 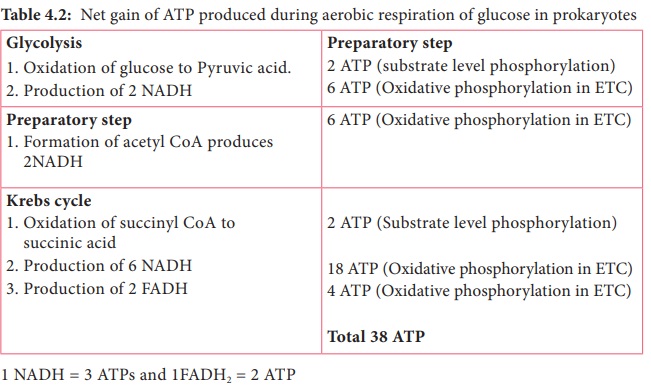 Table 4.2: Net gain of ATP produced during aerobic respiration of glucose in prokaryotes

1. Oxidation of glucose to Pyruvic acid.