The epithalamus lies in relation to the posterior part of the roof of the third ventricle, and in the adjoining part of its lateral wall.

The epithalamus lies in relation to the posterior part of the roof of the third ventricle, and in the adjoining part of its lateral wall. The structures included in the epithalamus are as follows.

The pineal body (or pineal gland) is a small piriform structure present in relation to the posterior wall of the third ventricle of the brain. It has for long been regarded as a vestigeal structure of no functional importance. However, it is now known to be an endocrine gland of considerable significance. The pineal body is made up of cells called pinealocytes. Pinealocytes are separated from one another by neuroglial cells that resemble astrocytes in structure (For details see the author’s HUMAN HISTOLOGY). The pineal body produces a number of hormones (chemically indolamines or polypeptides). These hormones have an important regulatory influence on many endocrine organs including the hypophysis cerebri, the thyroid, the parathyroids, the adrenals, and the gonads. The hormones of the pineal body reach the hypophysis cerebri both through blood and through the cerebrospinal fluid.

The pineal body is innervated by postganglionic sympathetic neurons located in the superior cervical sympathetic ganglia. The fibres travel through the nervus conarii. The fibres of this nerve end in the habenular nuclei. Fibres arising in these nuclei form the habenulopineal tract. A ganglion (ganglionconarii) has been described at the apex of the pineal body.

Some activities of the pineal body (e.g., the secretion of the hormone melatonin) show a marked circadian rythm, which appears to be strongly influenced by exposure of the animal to light. Activity of the pineal body is greater in darkness. It has been suggested that the suprachiasmatic nucleus of the hypothalamus plays an important role in the cyclic activity of the pineal body. This nucleus receives fibres from the retina. In turn it projects to the tegmental reticular nuclei. Reticulospinal fibres arising in these nuclei influence the sympathetic preganglionic neurons in the first thoracic segment of the the spinal cord. Axons of these neurons reach the superior cervical sympathetic ganglia from which the nervus conarii arises and supplies the pineal body.

These are groups of neurons lying deep to ependyma of the dorsal part of the third ventricle (close to the midline thalamic nuclei). Some connections of these nuclei are shown in Fig. 13.24. 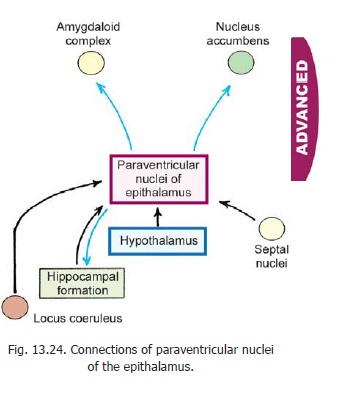 These nuclei have been regarded as cell stations in olfactory and visceral pathways but their function is not understood. The habenular nuclei receive afferents from several areas included in the limbic system (Fig. 13. 25). Most of these fibres travel through the stria medullaris thalami . Ascending fibres from the tegmentum of the midbrain reach the habenular nuclei through ascending noradrenergic and serotonergic bundles that travel through the habenulopeduncular tract . 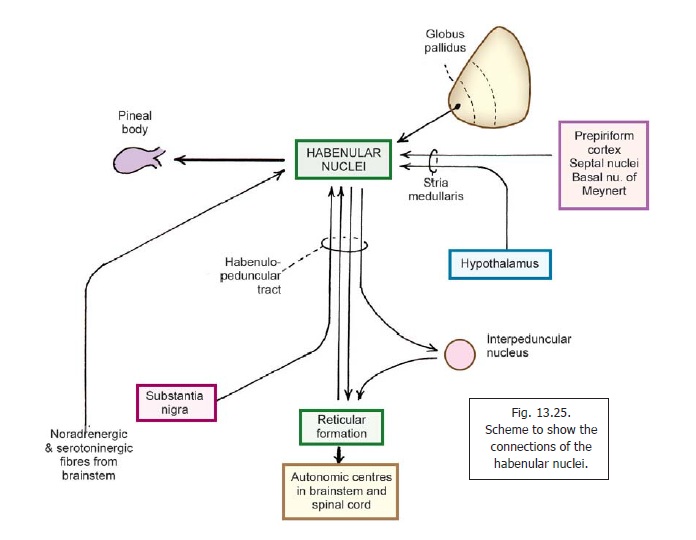 Some fibres of the stria medullaris thalami cross in the superior (or anterior) lamina of the pineal stalk to reach the habenular nuclei of the opposite side. These fibres constitute the habenular commissure.

Some of the fibres passing through this commissure are true commissural fibres that connect the amygdaloid complex and the hippocampal cortex of the right and left cerebral hemispheres. Some tectohabenular fibres also pass through the commissure.

Several neuromediators have been demonstrated in the fibres of the stria medullaris. These include acetylcholine, noradrenalin, serotonin and GABA.

Teachers and students who have read some earlier editions of this book should note that the subthalamic region is now called the ventral thalamus. They will find the list of structures included in this region unusual. The following clarifications are necessary.

1.              The subthalamic nucleus is closely related topographically, to this region. However, on functional considerations it is now considered to be one of the basal nuclei.

2.              The reticular nucleus was previously included as one of the nuclei of the dorsal thalamus. However, on the basis of its connections it is now considered as part of the ventral thalamus.

3.              From the above it will be seen that the term ventral thalamus is applied to a functionally related group of nuclei and not just to structures lying ventral to the dorsal thalamus.