Afferent impulses from a large number of subcortical centres converge on the thalamus.

Afferent impulses from a large number of subcortical centres converge on the thalamus (Fig. 13.4). Exteroceptive and proprioceptive impulses ascend to it through the medial lemniscus, the spinothalamic tracts, and the trigeminothalamic tract. Visual and auditory impulses reach the lateral and medial geniculate bodies respectively. Sensations of taste are conveyed to the thalamus through solitariothalamic fibres. Although the thalamus does not receive direct olfactory impulses they probably reach it through the amygdaloid complex. Visceral information is conveyed from the hypothalamus, 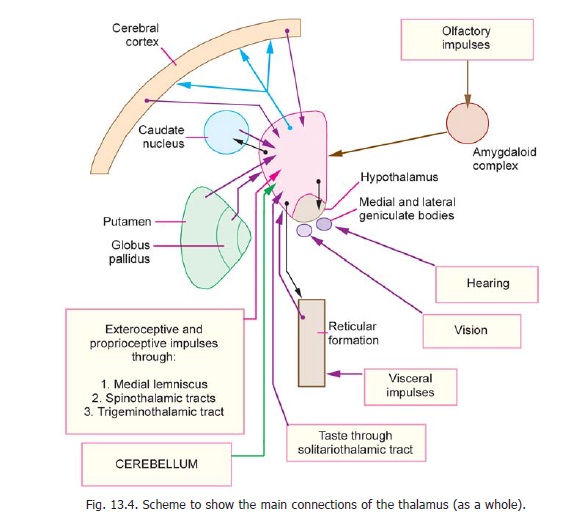 and probably through the reticular formation. In addition to these afferents, the thalamus receives profuse connections from all parts of the cerebral cortex, the cerebellum, and the corpus striatum. The thalamus is, therefore, regarded as a great integrating centre where information from all these sources is brought together. This information is projected to almost the whole of the cerebral cortex through profuse thalamocortical projections. The areas of cerebral cortex receiving fibres from individual thalamic nuclei are shown in Fig. 13.5a. Thalamocortical fibres form large bundles that are described as thalamic radiations or as thalamic peduncles. These radiations are anterior (or frontal), superior (or dorsal), posterior (or caudal), and ventral. Efferent projections from the thalamusalso reach the corpus striatum, the hypothalamus, and the reticular formation. Besides its integrating function, the thalamus is believed to have some degree of ability to perceive exteroceptive sensations, specially pain.

Keeping these facts in mind we may now consider the connections of individual thalamic nuclei. These connections are numerous, and many are controversial. The description that follows is confined to better known connections.