From a clinical point of view the most important connections of the thalamus are those of theventral posterior nucleus.

Connections of Ventral Group of nuclei

1.              From a clinical point of view the most important connections of the thalamus are those of theventral posterior nucleus. We have seen that this nucleus is divisible into ventral posterolateraland ventral posteromedial parts (that are sometimes mentioned as separate nuclei). This nucleus 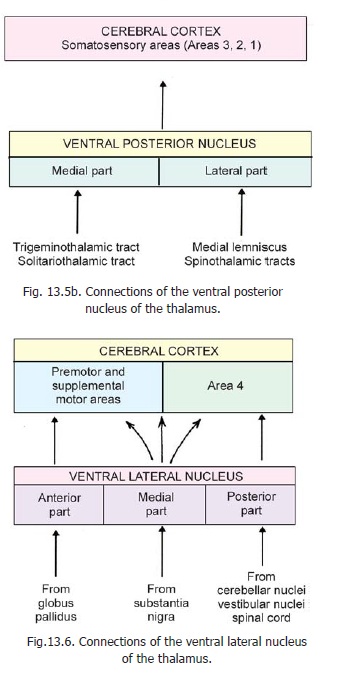 receives the terminations of the major sensory pathways ascending from the spinal cord and brainstem (Fig. 13.5b). These include the medial lemniscus, the spinothalamic tracts, the trigeminal lemniscus and the solitariothalamic fibres carrying sensations of taste. Within the nucleus fibres from different parts of the body terminate in a definite sequence. The fibres from the lowest parts of the body end in the most lateral part of the nucleus. The medial lemniscus and spinothalamic tracts carrying sensations from the limbs and trunk end in the ventral posterolateral part; while the trigeminal fibres (from the head) end in the ventral posteromedial part, which also receives the fibres for taste. Different layers of cells within the nucleus respond to different modalities of sensation.

All the sensations reaching the nucleus are carried primarily to the sensory area of the cerebral cortex (SI, areas 3,2,1) by fibres passing through the posterior limb of the internal capsule (superior thalamic radiation). They also reach the second somatosensory area (SII) located in the parietal operculum (of the insula).

The anterior part of the nucleus receives fibres from the globus pallidus and projects to the premotor and supplemental motor areas of the cerebral cortex.

The medial part receives afferents from the substantia nigra; and gives off a diffuse projection reaching many areas of the cerebral cortex.

3.              The connections of theventral anterior nucleusare largely unknown. It probably receivesfibres from the globus pallidus and cerebellar nuclei, and sends efferents to the cerebral cortex (parietal lobe, anterior part). Its functions are unknown.

connections of lateral group of nuclei

1.              The lateral dorsal nucleus receives impulses from the superior colliculus (Fig. 13.7). Efferent projections reach the cingulate gyrus, the parahippocampal gyrus, and parts of the hippocampal formation. Some fibres reach the cortex of the parietal lobe. 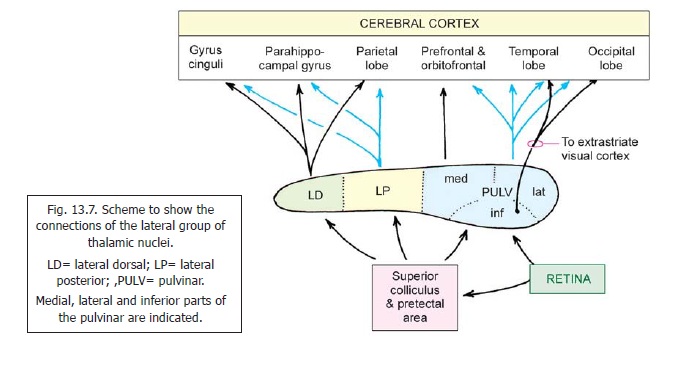 Connections of other thalamic nuclei

1.              Theanterior nucleusreceives fibres fromthe mamillary body through the mamillothalamic tract. Efferent fibres project to the gyrus cinguli (areas 23, 24, 32).Integrity of this pathway is necessary for recent memory. Some other connections of the nucleus are shown in Fig. 13.8. Anterior thalamic nuclei are probably involved in functions involving attention and memory. 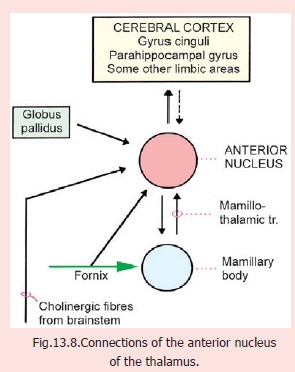 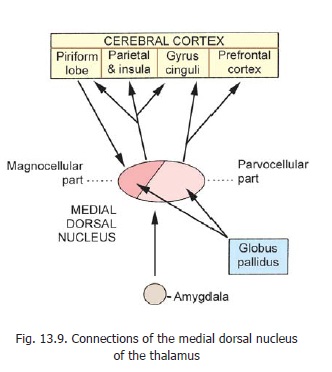 3.              Intralaminar nuclei: There are severalnuclei in this group divided into subgroups, anterior and posterior. The posterior subgroup includes the large centromedian nucleus. The nuclei of this group receive inputs from the body through collaterals of spinothalamic tracts (Fig. 13.10). Fibres are also received from the reticular formation, the cerebellar nuclei, and the substantia nigra. The centromedian nucleus receives many fibres from the globus pallidus. 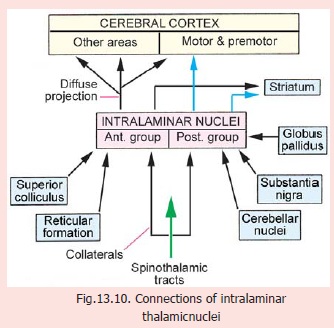 4.              Themidline nucleiconsist of several small groups of neurons (but there is controversyregarding the groups to be included under this heading). The connections of the nuclei (shown in Fig. 13.11) are mainly with the limbic system. Afferents include noradrenergic, serotoninergic and cholinergic bundles ascending from the brainstem. The midline nuclei probably play a role in memory and arousal.

The intralaminar, midline and reticular nuclei, have in the past, been grouped together as nonspecificthalamic nuclei. In the past they have been regarded as part of the ascending reticular activatingsystem which is believed to be responsible for maintaining a state of alertness. They have been described as receiving afferents from the reticular formation (mainly gigantocellular nucleus and ventral reticular nucleus of the medulla; caudal reticular nucleus of pons) and projecting to all parts of the cerebral cortex. Recent investigations have shown, however, that there is no validity in dividing thalamic nuclei into specific and unspecific. 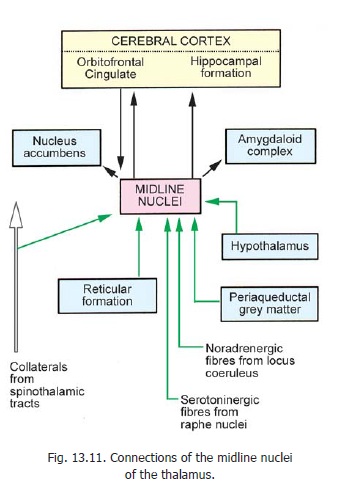