Control of hypophysis cerebri by the hypothalamus

Neurons in some hypothalamic nuclei produce bioactive peptides that are discharged in the neighbourhood of capillaries; or in some cases into CSF.

Control of hypophysis cerebri by the hypothalamus.

Neurons in some hypothalamic nuclei produce bioactive peptides that are discharged in the neighbourhood of capillaries; or in some cases into CSF. The process of the production of such bioactive substances by neurons (as distinct from release of neurotransmitters at synapses or efferent nerve endings) is referred to as neurosecretion.

The peptides (hormones) are synthesised by the neuron and are seen as membrane bound granules. Each peptide is associated with a neurophysin which binds the peptide. The granules move along axons to their terminations. Neurosecretory material in cell somata and in axons can be demonstrated by suitable staining. Release of peptide is triggered by activity of the neuron (and is associated with influx of Ca++ ions at the terminals). The released peptides are absorbed into blood. The release of peptides depends on inputs to the neurons concerned. Neurosecretory cells are influenced by temperature and osmolarity of blood, and by concentrations in it of hormones and of nutrients. 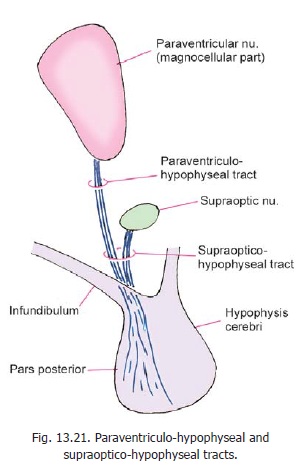 Control of the adenohypophysis by the hypothalamus

The hypothalamus controls secretion of hormones by the adenohypophysis by producing a number of releasing factors. Axons of cells in the infundibular (arcuate) nucleus end in the median eminence and infundibulum. They travel through the tuberohypophyseal tract which also receives fibres from several other hypothalamic nuclei. The axon terminals of the fibres in these tracts are closely related to capillaries in the region. The cells of the arcuate (infundibular) nucleus produce releasing factors that travel along their axons and are released into the capillaries. These capillaries carry these factors into the pars anterior of the hypophysis cerebri through the hypothalamo-hypophysealportal system. In the pars anterior these factors are responsible for release of appropriate hormones.It may be noted, however, that in the case of some hormones their secretion is inhibited by such factors. 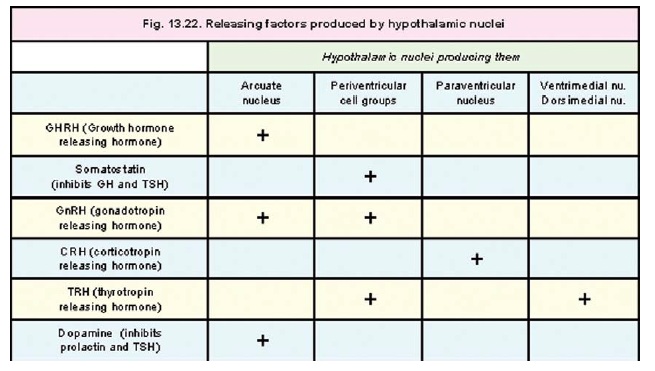 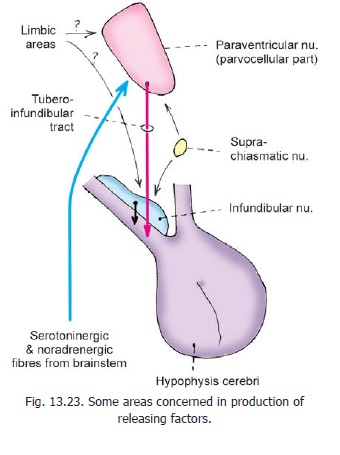 Fibre bundles associated with the hypothalamus

In considering the connections of the hypothalamus reference has been made to a number of fibre bundles not described earlier. These are briefly considered below.

The medial forebrain bundle begins in the anterior olfactory areas. It runs caudally through the lateral zone of the hypothalamus, to reach the tegmentum of the midbrain. It contains both ascending and descending fibres. Cholinergic, noradrenergic and dopaminergic fasciculi pass through this bundle. Various other neuromediators have also been demonstrated in relation to this bundle.

The mamillary peduncle is a bundle of fibres that connects the tegmentum of the midbrain to the mamillary body. The fibres in it carry visceral impulses to the hypothalamus (Fig. 13.20). 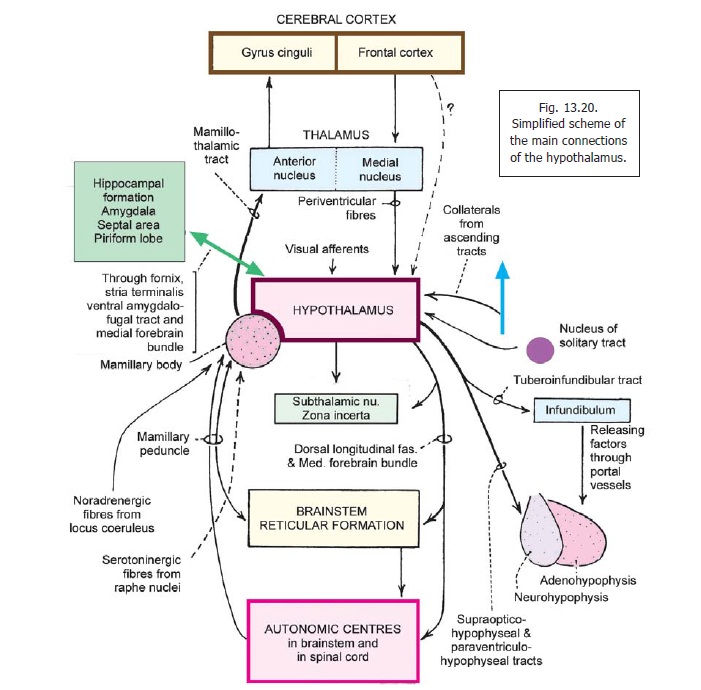 The dorsal longitudinal fasciculus (of Schultz) runs vertically within the brainstem, in close relation to the central grey matter. It is made of unmyelinated fibres and is, therefore, also called the unmyelinated longitudinal fasciculus. It connects centres in the midbrain, pons, and the upperpart of the medulla with the hypothalamus and thalamus. The fibres in it are both ascending and descending.

This tract descends through the midbrain. It lies lateral to the medial longitudinal fasciculus, dorsolateral to the red nucleus. When traced upwards it ascends through the ventral thalamic (subthalamic) region to reach the lentiform nucleus. Some fibres even reach the motor cortex. Traced downwards the tract extends to the medulla where it reaches the inferior olivary complex, and the reticular formation.

Some fibres in the tract are serotoninergic, noradrenergic or cholinergic. The noradrenergic fibres arise from the nucleus coeruleus.