Vitamin K confers biologic activity upon prothrombin and factors VII, IX, and X by participating in their postribosomal modifica-tion. Vitamin K is a fat-soluble substance found primarily in leafy green vegetables. The dietary requirement is low, because the vita-min is additionally synthesized by bacteria that colonize the human intestine. Two natural forms exist: vitamins K1 and K2. Vitamin K1 (phytonadione; Figure 34–5) is found in food. Vitamin K2 (menaquinone) is found in human tissues and is syn-thesized by intestinal bacteria.Vitamins K1 and K2 require bile salts for absorption from the intestinal tract. Vitamin K1 is available clinically in oral and par-enteral forms. Onset of effect is delayed for 6 hours but the effect is complete by 24 hours when treating depression of prothrombin activity by excess warfarin or vitamin K deficiency. Intravenous administration of vitamin K1 should be slow, because rapid infu-sion can produce dyspnea, chest and back pain, and even death. Vitamin K repletion is best achieved with intravenous or oral administration, because its bioavailability after subcutaneous administration is erratic. Vitamin K1 is currently administered to all newborns to prevent the hemorrhagic disease of vitamin K deficiency, which is especially common in premature infants. The water-soluble salt of vitamin K3 (menadione) should never be used in therapeutics. It is particularly ineffective in the treatment of war-farin overdosage. Vitamin K deficiency frequently occurs in hospi-talized patients in intensive care units because of poor diet, parenteral nutrition, recent surgery, multiple antibiotic therapy, and uremia. Severe hepatic failure results in diminished protein synthe-sis and a hemorrhagic diathesis that is unresponsive to vitamin K.

Deficiencies in plasma coagulation factors can cause bleeding (Table 34–3). Spontaneous bleeding occurs when factor activity is less than 5–10% of normal. Factor VIII deficiency (classichemophilia, or hemophilia A) and factor IX deficiency (Christmas disease, or hemophilia B) account for most of theheritable coagulation defects. Concentrated plasma fractions are available for the treatment of these deficiencies. Administration of plasma-derived, heat- or detergent-treated factor concen-trates and recombinant factor concentrates are the standard treatments for bleeding associated with hemophilia. Lyophilized factor VIII concentrates are prepared from large pools of plasma. Transmission of viral diseases such as hepatitis B and C and HIV is reduced or eliminated by pasteurization and by extraction of plasma with solvents and detergents. However, this treatment does not remove other potential causes of transmissible diseases such as prions. For this reason, recombinant clotting factor preparations are recommended whenever possible for factor replacement. The best use of these therapeutic materials requires diagnostic specificity of the deficient factor and quantitation of its activity in plasma. Intermediate purity factor VIII concen-trates (as opposed to recombinant or high purity concentrates) contain significant amounts of von Willebrand factor. Humate-P is a factor VIII concentrate that is approved by the FDA for the treatment of bleeding associated with von Willebrand disease. 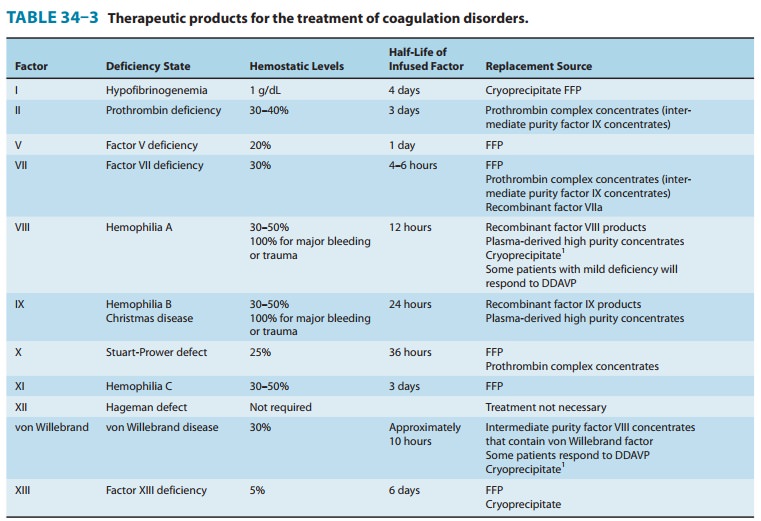 The initial loading dose for factor VIII is 50 units/kg of body weight to achieve 100% activity of factor VIII from a baseline of 1% or less, assuming a normal hemoglobin. Each unit of factor VIII per kilogram of body weight raises its activity in plasma 2%. Replacement should be administered every 12 hours. Factor IX therapy requires twice the dose of factor VIII, but with an admin-istration of about every 24 hours because of its longer half-life. Recombinant factor IX has only 80% recovery compared with plasma-derived factor IX products. Therefore, dosing with recom-binant factor IX requires 120% of the dose used with the plasma-derived product.

Desmopressin acetate increases the factor VIII activity ofpatients with mild hemophilia A or von Willebrand disease. It can be used in preparation for minor surgery such as tooth extraction without any requirement for infusion of clotting factors if the patient has a documented adequate response. High-dose intrana-sal desmopressin  is available and has been shown to be efficacious and well tolerated by patients.

Freeze-dried concentrates of plasma containing prothrombin, factors IX and X, and varied amounts of factor VII (Proplex, etc) are commercially available for treating deficiencies of these factors (Table 34–3). Each unit of factor IX per kilogram of body weight raises its activity in plasma 1.5%. Heparin is often added to inhibit coagulation factors activated by the manufacturing pro-cess. However, addition of heparin does not eliminate all throm-boembolic risk.

Some preparations of factor IX concentrate contain activated clotting factors, which has led to their use in treating patients with inhibitors or antibodies to factor VIII or factor IX. Two products are available expressly for this purpose: Autoplex (with factor VIII correctional activity) and FEIBA (Factor Eight Inhibitor Bypassing Activity). These products are not uniformlysuccessful in arresting hemorrhage, and the factor IX inhibitor titers often rise after treatment with them. Acquired inhibitors of coagulation factors may also be treated with porcine factor VIII (for factor VIII inhibitors) and recombinant activated factor VII. Recombinant activated factor VII (NovoSeven) is being increas-ingly used to treat coagulopathy associated with liver disease and major blood loss in trauma and surgery. These recombinant and plasma-derived factor concentrates are very expensive, and the indications for them are very precise. Therefore, close consultation with a hematologist knowledgeable in this area is essential.

Cryoprecipitate is a plasma protein fraction obtainable fromwhole blood. It is used to treat deficiencies or qualitative abnor-malities of fibrinogen, such as that which occurs with dissemi-nated intravascular coagulation and liver disease. A single unit of cryoprecipitate contains 300 mg of fibrinogen.

Cryoprecipitate may also be used for patients with factor VIII deficiency and von Willebrand disease if desmopressin is not indi-cated and a pathogen-inactivated, recombinant, or plasma-derived product is not available. The concentration of factor VIII and von Willebrand factor in cryoprecipitate is not as great as that found in the concentrated plasma fractions. Moreover, cryoprecipitate is not treated in any manner to decrease the risk of viral exposure. For infusion, the frozen cryoprecipitate unit is thawed and dissolved in a small volume of sterile citrate-saline solution and pooled with other units. Rh-negative women with potential for childbearing should receive only Rh-negative cryoprecipitate because of possible contamination of the product with Rh-positive blood cells.

Factor VIIa has been widely used for off-label indications, including bleeding with trauma, surgery, intracerebral hemorrhage, and warfarin toxicity. A major concern of off-label use has been the possibility that thrombotic events may be increased. A recent study examined rates of thromboembolic events in 35 placebo-controlled trials where factor VIIa was administered for nonapproved indica-tions. This study found an increase in arterial, but not venous, thrombotic events, particularly among elderly individuals.

Aminocaproic acid (EACA), which is chemically similar to the amino acid lysine, is a synthetic inhibitor of fibrinolysis. It com-petitively inhibits plasminogen activation (Figure 34–3). It is rap-idly absorbed orally and is cleared from the body by the kidney. The usual oral dosage of EACA is 6 g four times a day. When the drug is administered intravenously, a 5 g loading dose should be infused over 30 minutes to avoid hypotension. Tranexamic acid is an ana-log of aminocaproic acid and has the same properties. It is adminis-tered orally with a 15 mg/kg loading dose followed by 30 mg/kg every 6 hours. 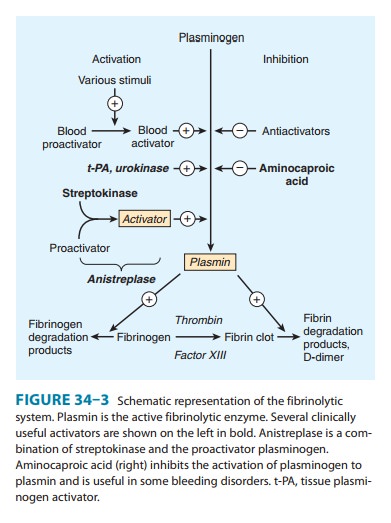 Clinical uses of EACA are as adjunctive therapy in hemophilia, as therapy for bleeding from fibrinolytic therapy, and as prophy-laxis for rebleeding from intracranial aneurysms. Treatment success has also been reported in patients with postsurgical gastrointestinal bleeding and postprostatectomy bleeding and bladder hemorrhage secondary to radiation- and drug-induced cystitis. Adverse effects of the drug include intravascular thrombosis from inhibition of plasminogen activator, hypotension, myopathy, abdominal dis-comfort, diarrhea, and nasal stuffiness. The drug should not be used in patients with disseminated intravascular coagulation or genitourinary bleeding of the upper tract, eg, kidney and ureters, because of the potential for excessive clotting.

Aprotinin is a serine protease inhibitor (serpin) that inhibits fibrinolysis by free plasmin and may have other antihemorrhagic effects as well. It also inhibits the plasmin-streptokinase complex in patients who have received that thrombolytic agent. Aprotinin was shown to reduce bleeding—by as much as 50%—from many types of surgery, especially that involving extracorporeal circula-tion for open heart procedures and liver transplantation. However, clinical trials and internal data from the manufacturer suggested that use of the drug was associated with an increased risk of renal failure, heart attack, and stroke. A prospective trial was initiated in Canada but halted early because of concerns that use of the drug was associated with increased mortality. The drug was removed from the market in 2007.