Platelet function is regulated by three categories of substances. The first group consists of agents generated outside the platelet that interact with platelet membrane receptors, eg, catecholamines, collagen, thrombin, and prostacyclin.

Platelet function is regulated by three categories of substances. The first group consists of agents generated outside the platelet that interact with platelet membrane receptors, eg, catecholamines, collagen, thrombin, and prostacyclin. The second category con-tains agents generated within the platelet that interact with mem-brane receptors, eg, ADP, prostaglandin D2, prostaglandin E2, and serotonin. The third group comprises agents generated within the platelet that act within the platelet, eg, prostaglandin endoperox-ides and thromboxane A2, the cyclic nucleotides cAMP and cGMP, and calcium ion. From this list of agents, several targets for platelet inhibitory drugs have been identified (Figure 34–1): inhi-bition of prostaglandin synthesis (aspirin), inhibition of ADP-induced platelet aggregation (clopidogrel, prasugrel, ticlopidine), and blockade of glycoprotein IIb/IIIa receptors on platelets (abcix-imab, tirofiban, and eptifibatide). Dipyridamole and cilostazol are additional antiplatelet drugs. 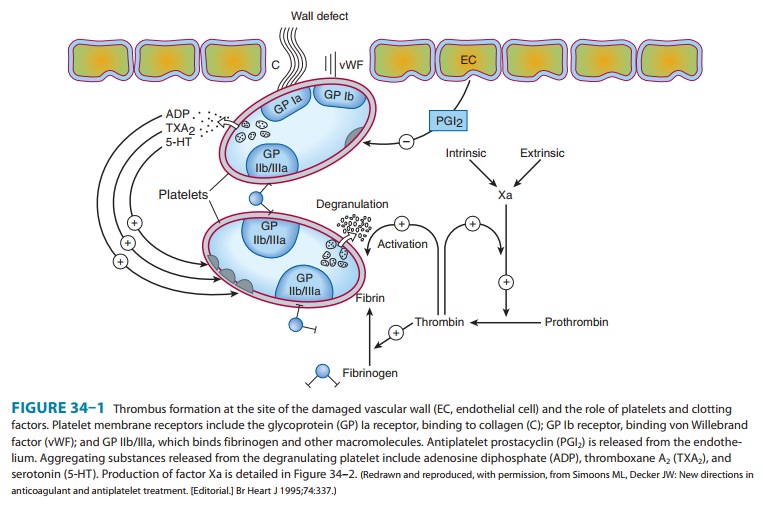 The prostaglandin thromboxane A2 is an arachidonate product that causes platelets to change shape, release their granules, and aggregate . Drugs that antagonize this pathway interfere with platelet aggregation in vitro and prolong the bleed-ing time in vivo. Aspirin is the prototype of this class of drugs.

As described, aspirin inhibits the synthesis of thromboxane A2 by irreversible acetylation of the enzyme cycloox-ygenase. Other salicylates and nonsteroidal anti-inflammatory drugs also inhibit cyclooxygenase but have a shorter duration of inhibitory action because they cannot acetylate cyclooxygenase; that is, their action is reversible.

The FDA has approved the use of 325 mg/d aspirin for primary prophylaxis of myocardial infarction but urges caution in this use of aspirin by the general population except when prescribed as an adjunct to risk factor management by smoking cessation and low-ering of blood cholesterol and blood pressure. Meta-analysis of many published trials of aspirin and other antiplatelet agents con-firms the value of this intervention in the secondary prevention of vascular events among patients with a history of vascular events.

Ticlopidine, clopidogrel, and prasugrel reduce platelet aggrega-tion by inhibiting the ADP pathway of platelets. These drugs irreversibly block the ADP receptor on platelets. Unlike aspirin, these drugs have no effect on prostaglandin metabolism. Use of ticlopidine, clopidogrel, or prasugrel to prevent thrombosis is now considered standard practice in patients undergoing place-ment of a coronary stent. As the indications and adverse effects of these drugs are different, they will be considered individually.

Ticlopidine is approved for prevention of stroke in patients with a history of a transient ischemic attack (TIA) or thrombotic stroke, and in combination with aspirin for prevention of coro-nary stent thrombosis. Adverse effects of ticlopidine include nau-sea, dyspepsia, and diarrhea in up to 20% of patients, hemorrhage in 5%, and, most seriously, leukopenia in 1%. The leukopenia is detected by regular monitoring of the white blood cell count dur-ing the first 3 months of treatment. Development of thrombotic thrombocytopenic purpura has also been associated with the ingestion of ticlopidine. The dosage of ticlopidine is 250 mg twice daily. Because of the significant side effect profile, the use of ticlo-pidine for stroke prevention should be restricted to those who are intolerant of or have failed aspirin therapy. Doses of ticlopidine less than 500 mg/d may be efficacious with fewer adverse effects.

Clopidogrel has fewer adverse effects than ticlopidine and is rarely associated with neutropenia. Thrombotic thrombocytopenic purpura has been reported. Because of its superior side effect pro-file and dosing requirements, clopidogrel is frequently preferred over ticlopidine. The antithrombotic effects of clopidogrel are dose-dependent; within 5 hours after an oral loading dose of 300 mg, 80% of platelet activity will be inhibited. The mainte-nance dose of clopidogrel is 75 mg/d, which achieves maximum platelet inhibition. The duration of the antiplatelet effect is 7–10 days. Clopidogrel is a prodrug that requires activation via the cytochrome P450 enzyme isoform CYP2C19. Depending on the single nucleotide polymorphism inheritance pattern in CYP2C19, individuals may be poor metabolizers of clopidogrel, and these patients may be at increased risk of cardiovascular events due to inadequate drug effect. The FDA has recommended CYP2C19 genotyping to identify such patients and advises prescribers to consider alternative therapies in poor metabolizers. However, more recent studies have questioned the impact of CYP2C19 metabolizer status on outcomes. Drugs that impair CYP2C19 function, such as omeprazole, should be used with cau-tion pending clarification of the importance of CYP2C19 status.

Prasugrel, similar to clopidogrel, is approved for patients with acute coronary syndromes. The drug is given as a 60-mg loading dose and then 10 mg/d in combination with aspirin as outlined for clopidogrel. The Trial to assess Improvement in Therapeutic Outcomes by Optimizing Platelet Inhibition with Prasugrel (TRITON-TIMI38) compared prasugrel with clopidogrel in a randomized, double-blind trial with aspirin and other standard therapies managed with percutaneous coronary interventions. This trial showed a reduction in the primary composite cardio-vascular endpoint (cardiovascular death, nonfatal stroke or non-fatal myocardial infarction) for prasugrel in comparison with clopidogrel. However, the major and minor bleeding risk was increased with prasugrel. Prasugrel is contraindicated in patients with history of TIA or stroke because of increased bleeding risk. Although cytochrome P450 genotype status is an issue with clopidogrel, it does not have an impact on the use of prasugrel.

The reported incidence of resistance to these drugs varies greatly, from less than 5% to 75%. In part this tremendous variation in incidence reflects the definition of resistance (recurrent thrombo-sis while on antiplatelet therapy vs in vitro testing), methods by which drug response is measured, and patient compliance. Several methods for testing aspirin and clopidogrel resistance in vitro are now FDA-approved. However, the incidence of drug resistance varies considerably by testing method. These tests may be useful in selected patients to assess compliance or the cause of a recurrent thrombotic event, but their utility in routine clinical decision making outside of clinical trials remains controversial.

The glycoprotein IIb/IIIa inhibitors are used in patients with acute coronary syndromes. These drugs target the platelet IIb/IIIa receptor complex (Figure 34–1). The IIb/IIIa complex functions as a receptor mainly for fibrinogen and vitronectin but also for fibronectin and von Willebrand factor. Activation of this receptor complex is the “final common pathway” for platelet aggregation. There are approximately 50,000 copies of this complex on the surface of each platelet. Persons lacking this receptor have a bleed-ing disorder called Glanzmann’s thrombasthenia.

Abciximab, a chimeric monoclonal antibody directed againstthe IIb/IIIa complex including the vitronectin receptor, was the first agent approved in this class of drugs. It has been approved for use in percutaneous coronary intervention and in acute coronary syndromes. Eptifibatide is an analog of the sequence at the extreme carboxyl terminal of the delta chain of fibrinogen, which mediates the binding of fibrinogen to the receptor. Tirofiban is a smaller molecule with similar properties. Eptifibatide and tiro-fiban inhibit ligand binding to the IIb/IIIa receptor by their occu-pancy of the receptor but do not block the vitronectin receptor.

The three agents described above are administered parenterally. Oral formulations of IIb/IIIa antagonists are in various stages of development.

Dipyridamole is a vasodilator that also inhibits platelet functionby inhibiting adenosine uptake and cGMP phosphodiesterase activity. Dipyridamole by itself has little or no beneficial effect. Therefore, therapeutic use of this agent is primarily in combina-tion with aspirin to prevent cerebrovascular ischemia. It may also be used in combination with warfarin for primary prophylaxis ofthromboemboli in patients with prosthetic heart valves. A combi-nation of dipyridamole complexed with 25 mg of aspirin is now available for secondary prophylaxis of cerebrovascular disease.

Cilostazol is a newer phosphodiesterase inhibitor that pro-motes vasodilation and inhibition of platelet aggregation. Cilostazol is used primarily to treat intermittent claudication.