Over 30 years ago Keys and Hegsted made the land-mark observation that variation in the concentration of serum cholesterol across seven different countries was positively related to the amount of energy derived from saturated fat.

Diet exerts a profound influence on blood lipids and lipoproteins and, as such, should always be a major component of strategies for the primary prevention of diseases in which lipids play an etiological role, such as CHD. Nevertheless, despite convincing epide-miological evidence and the existence of credible biochemical mechanisms to support a relationship between dietary fat and serum cholesterol, the outcome of prospective intervention trials designed to test this relationship within populations has been disappointing.

Over 30 years ago Keys and Hegsted made the land-mark observation that variation in the concentration of serum cholesterol across seven different countries was positively related to the amount of energy derived from saturated fat. Conversely, they found that intake of dietary PUFA was inversely related to serum cho-lesterol. From this finding they were able to formulate equations that enabled them to predict the quantita-tive effect of saturated and polyunsaturated fat on serum cholesterol (Figure 6.16). In simpler terms, the ratio of PUFAs to saturated fatty acids (SFAs), the P : S ratio, was used with effect to predict changes in serum cholesterol. Although still effective today, the equations and P:S ratio are being superseded by advanced knowledge of the biological effects of indi-vidual fatty acids. It is now well established that satu-rated fats with between 12 and 16 carbon atoms, namely lauric, myristic, and palmitic acids, are par-ticularly hypercholesterolemic, whereas stearic acid, an extremely abundant SFA in most diets, is relatively neutral in its effects on serum cholesterol. [Note that stearic acid is desaturated to monounsaturated fatty acids (MUFAs) by 9 desaturase]. The cholesterol-raising effect of SFAs arises chiefly from an increase in LDL cholesterol and is about twice as potent as the hypocholesterolemic effect of dietary PUFAs. Para-doxically, SFAs actually increase serum HDL choles-terol. The polyunsaturates are divisible into two main series on the basis of the position of the first double bond from the methyl end of the fatty acid chain, the parent fatty acids being linoleic (C18:2n-6) and α-linolenic (C18:3n-3) acids. The cholesterol-lowering effects of dietary PUFA is largely attributable to the effects of linoleic acid in lowering LDL. Historically, 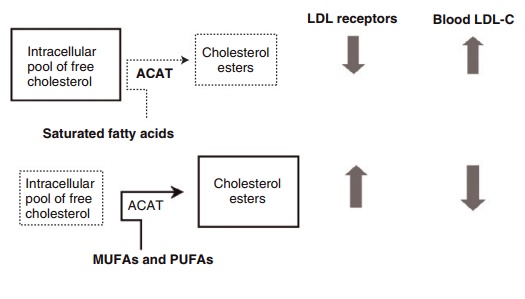 monounsaturated fat was considered to be neutral with respect to its effects on lipids and lipoproteins and was omitted from the predictive formulae of Keys and Hegsted. However, further studies, prompted by interest in the role of MUFAs in the Mediterranean diet, have shown that MUFA-enriched diets may decrease LDL cholesterol, although possibly to a lesser extent than linoleic acid, and increase HDL choles-terol. An additional benefit of MUFAs is thought to be conferred by the presence of a single double bond in MUFAs, which when incorporated into the mem-brane phospholipids of LDL, protect this lipoprotein from oxidative modification, an essential prerequisite step in the deposition of cholesterol in the artery wall. In this regard, there has been concern that increasing dietary PUFA will impose additional oxidative stress on LDL. While this idea forms part of the rationale for limiting the amount of dietary PUFA to less than 10% of energy intake, there is as yet no convincing evidence of adverse effects from increasing the level of PUFA in tissues and circulating lipoproteins.