Lipids in the human body exist in two major pools: structural lipids in membranes and storage lipids in body fat.

2 Membrane lipids contain a much higher propor-tion of long-chain PUFAs.

3 Membrane lipids are more diverse and rarely include TAGs, which are the main component of storage lipids.

Biological membranes surrounding cells and subcel-lular organelles exist primarily as lipid bilayers (Figure 6.3). The lipids in both the inner and outer surfaces of membranes are composed mainly of phospholip-ids and free cholesterol, which interface with a myriad of proteins functioning as receptors, transporters, enzymes, ion channels, etc. Some lipids, i.e., PUFAs, confer the feature of “fluidity” to membranes, whereas others, i.e., cholesterol and saturated fatty acids, have the opposite rigidifying effect. Membranes have extraordinarily diverse fatty acid profiles and phos-pholipid composition depending on their tissue and subcellular location. They are also the body’s reservoir of both fat-soluble vitamins and eicosanoid precur-sors such as arachidonate. 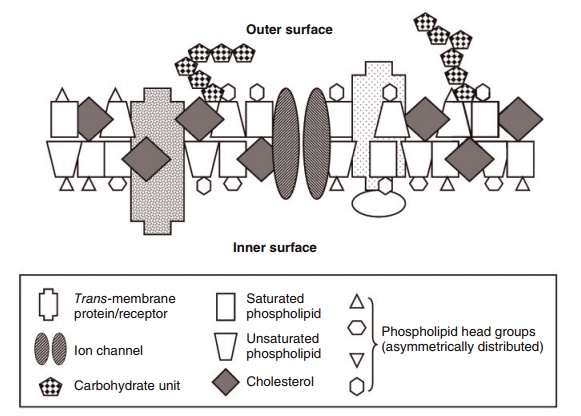 Figure 6.3 Simplified schematic view of a membrane bilayer. The main components are proteins, free cholesterol, phospholipids, and carbohy-drates. There are many different proteins with a myriad of shapes, membrane distribution, and functions, of which three are illustrated. Membrane phospholipids principally help to create the bilayer. They have four types of “head groups” (choline, ethanolamine, serine, and inositol) that are located at or near the membrane’s two surfaces. The two fatty acids in phospholipids are mixtures of 16- to 22-carbon saturates, monounsaturates, and polyunsaturates in all combinations, with those rich in unsaturated fatty acids occupying more space; hence, their trapezoid shape compared with the narrower, rectangular shape of the more saturated phospholipids. Free cholesterol represents 30–40% of the lipid in most membranes. The many different carbohydrates are on the membrane’s surfaces and are bound to lipids and/or proteins in the membrane.

Triacylglycerols are the main energy storage form of lipids and they are the principal component of body fat. TAG-containing fatty acids destined for oxidation are also present in measurable but much lower amounts in all tissues that can oxidize long-chain fatty acids, i.e., muscle and heart. TAG is syn-thesized by the intestine and liver, where it is subse-quently incorporated into lipoproteins for the transport of lipids to and from other tissues.

The main fatty acids in the TAG of adult human body fat are palmitate (20–30%), stearate (10–20%), oleate (45–55%), and linoleate (10–15%). The fatty acid profile of adult body fat always reflects the profile of dietary fat. Only rarely would this result in other fatty acids being more prevalent in body fat than the four listed here. At birth, the fatty acid profile of body fat is unusual in having very low linoleate (<3%) and α-linolenate (<1%) but a higher proportion of long-chain polyunsaturates than later in life. Body fat occu-pies several discrete sites that expand and contract as needed. Body fat is about 82% by weight TAG, making it by far the main body pool of palmitate, stearate, oleate, and linoleate.

The main sites of body fat are subcutaneous and intravisceral, and they have different rates of response to stimuli for accumulation or release of fatty acids. Within a given site, growing evidence suggests that PUFAs are more easily released from adipose tissue TAG than are saturated fatty acids, especially during fasting or longer term energy deficit.

In a way, plasma and milk lipids are an exception to the general rule distinguishing membrane and storage lipids. Plasma and milk lipids are present mostly as lipoproteins, comprising mostly phospholipids and cholesterol in the surrounding membrane and TAG in the core. Plasma lipids contain the only significant pool of free fatty acids or NEFAs in the body. Free fatty acids are not components of lipo-proteins but are transported bound to albumin. They are liberated mostly from adipose tissue when plasma glucose and insulin are low. Plasma also contains pro-portionally more fatty acids esterified to cholesterol (cholesteryl esters) than are found in tissues.

An estimate of the whole body content of lipids in a healthy adult human is given in Table 6.5. Additional body fat is deposited during pregnancy, but the fatty acid composition remains similar to that of nonpreg-nant adults and reflects dietary fat intake. The total lipid content of plasma rises in the third trimester, with a proportionally greater increase in saturated fatty acids than PUFAs. This downward trend in the percentage of PUFA towards term has led to some concern about the possible adverse consequences for the fetus of defi-ciency of PUFA. However, the actual amount of PUFA in blood lipids rises but less so than for saturated fatty acids; resulting in a proportional decrease in PUFA. 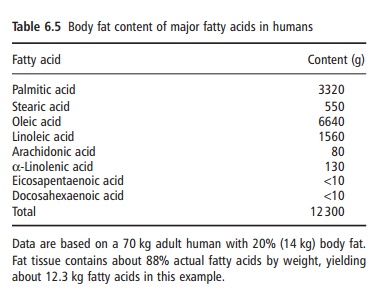 also rises rapidly in brain lipids, followed a little later by an increasing content of long-chain saturates and monounsaturates as myelin develops. Adipose tissue contains very little linoleate or α-linolenate at birth but their content increases rapidly with milk feeding. Plasma cholesterol is relatively low at birth and in infancy, but increases by more than twofold by adulthood.

In general, regardless of the profile of dietary fatty acids, saturated and monounsaturated fatty acids pre-dominate in adipose tissue, whereas there is a closer balance between saturates, monounsaturates, and polyunsaturates in structural lipids. Long-chain PUFAs such as docosahexaenoate are present in high concentrations in specialized membranes, including those of the retina photoreceptor, in synapses of the brain, and in sperm.