Lipids as components of the diet

Cholesterol is found only in animal lipids, while a variety of other phytosterols occur in plants. Soyabeans, leafy plants, and lean animal meat are rich in dietary phospholipids.

Lipids as components of the diet

Food or dietary sources of lipids are listed in Table 6.3. Cholesterol is found only in animal lipids, while a variety of other phytosterols occur in plants. Soyabeans, leafy plants, and lean animal meat are rich in dietary phospholipids. Animal fat and plant oils from seeds or nuts are rich in TAG. 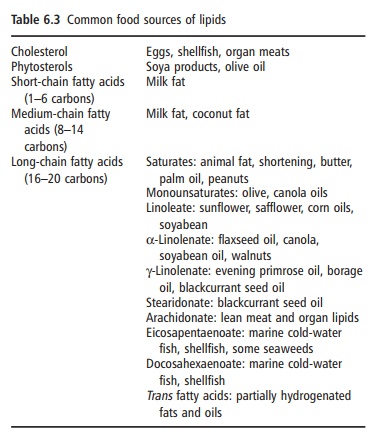 The leafy and fruit components of plants contain phospholipids and sterols, whereas seeds contain tri-glycerides. With rare exceptions such as flaxseed (linseed), edible green leaves are proportionally much richer in α-linolenate than are seeds. Seed oils are usually rich in either linoleate or oleate. Common plant sterols include β-sitosterol, β-sitostanol, and campesterol. Foods enriched with esters of plant sterols are used widely to lower blood cholesterol via the inhibition of cholesterol absorption in the gut.

Phospholipids and cholesterol constitute the majority of lipids in tissues (gut, kidney, brain, skeletal muscle, etc.) of lean, undomesticated animals. By contrast, in domesticated animals, TAGs or non-membrane lipids present in subcutaneous and intra-muscular adipose tissue deposits are the dominant form of lipid on a weight basis. This is because domes-tication usually involves rearing animals with minimal exercise and on higher energy intakes, leading to more subcutaneous and visceral TAG obtained through both fat synthesis and deposition of dietary fat.

Animal meat lipids are the main dietary source of arachidonate (20:4n-6), although it can also be obtained from tropical marine fish.

Lipoproteins are the main form of lipid in the blood. Like lipoproteins, milk lipids also occur as globules consisting of a combination of a mainly TAG core surrounded by a membrane con-taining proteins, cholesterol, and phospholipids.

Phospholipids and cholesterol constitute the main lipids of undomesticated edible fish, which usually have low amounts of TAG or stored body fat. As in domesticated animals, it is likely that subcutaneous and intramuscular fat deposits of TAG will increase in commercially farmed fish. Cold-water marine fish are the main dietary source of the long-chain n-3 (omega-3) polyunsaturates eicosapentaenoate (20:5n-3), and docosahexaenoate (22:6n-3), but the former is also found in several types of edible seaweed. Tropi-cal fish generally have higher arachidonate than do cold-water fish.