While saturated fats consist of straight chains of carbon atoms which pack together tightly in the phospholipids of cell membranes and lipoproteins.

While saturated fats consist of straight chains of carbon atoms which pack together tightly in the phospholipids of cell membranes and lipoproteins, in contrast, carbon double bonds in the cis configura-tion in MUFAs and PUFAs introduce a bend or kink into the carbon chain. This alters the physical proper-ties of the phospholipids containing these fatty acids, by, for example, increasing their packing volume, a physical property that contributes to an increase in membrane fluidity. The partial hydrogenation of MUFAs and PUFAs, most notably during the indus-trial processing of foods for the purpose of solidifying unsaturated oils, results in a loss of this kink as the fatty acid assumes a straighter, trans configuration that resembles that found in SFAs. This likeness in chemical structure is thought to account for the SFA-like effects of trans fatty acids such as elaidic acid (trans isomer of oleic acid) on serum lipids (see Figures 6.1 and 6.2). The results of prospective cohort studies such as the Nurses’ Health Study showed that high levels of trans fats in excess of 7% energy increased serum LDLs and reduced HDLs (Willet et al. 1993). However, despite the continued use of par-tially hydrogenated fats in food products, the average intake of trans fatty acids in most Western diets does not exceed 2% of total energy intake, and at this level of intake these fats are unlikely to exert adverse effects on serum lipoproteins. 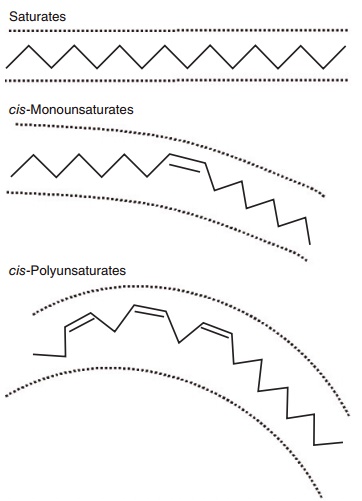 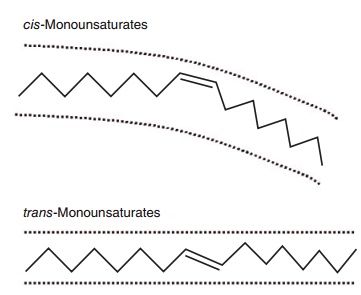