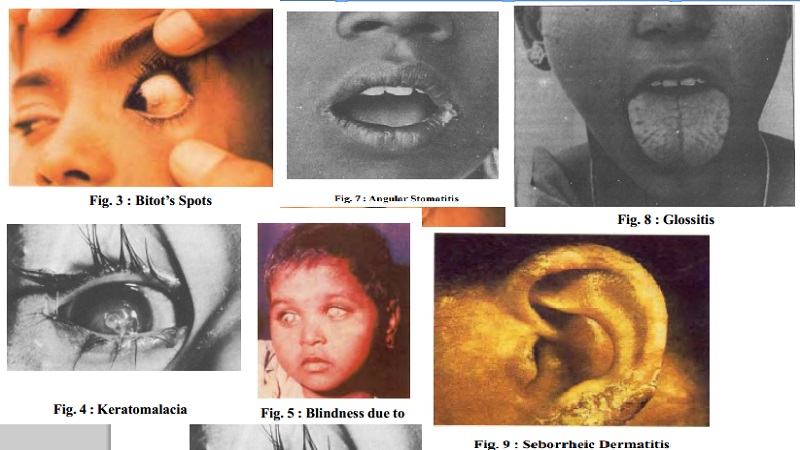 The important deficiency states due to lack of vitamin A in the diet are:

3.     Xerosis Cornea: When dryness spreads to cornea, it takes on a hazy, lusterless appearance.

5.     Keratomalacia : When xerosis of the conjuctiva and cornea is not treated, it may develop into a condition known as keratomalacia.

Under the national prophylaxis programme against nutritional blindness 2,00,000 IU of vitamin A in oil is administered every six months to preschool children to eliminate vitamin A deficiency.

The chief signs in fully developed active rickets are found in the chest wall (beading), waists and ankles (thickening) and various deformities (knock - knees and bow legs). The child is restless, fretful and pale with flabby and toneless muscles, which allow the limbs to assume unnatural postures. Development is delayed so that the teeth often erupt late and there is failure to sit up, stand, crawl and walk at the normal ages. There is usually a protuberant abdomen so called potbelly.

It may be called as adult rickets. It occurs generally in pregnant women. The changes in bone are similar to rickets. Skeletal pain is usually present and persistent and ranges from a dull ache to severe pain. Muscular weakness is often present and the patient may find difficulty in climbing stairs or getting out of a chair.

Severe Vitamin C deficiency results in the development of the disease scurvy. The disease is characterized by

General weakness followed by shortness of breath, pain in bones, joints and muscles of the extremities.

Swollen and tender joints, haemorrhages in various tissues and pain in joints.

In infantile scurvy, the infant screams if picked up or moved or handled. There is pain and tenderness of the limbs.

Thiamine deficiency causes the disease, beriberi, in human beings. Two forms of beriberi namely wet beriberi and dry beriberi occurs in adults. The first symptoms are anorexia (loss of appetite) with heaviness and weakness of the legs. There is pain and numbness in the legs. The subjects feel weak and get easily exhausted. Oedema is the important feature of wet beriberi. The calf muscles are swollen. The pulse is fast and bouncing. The heart becomes weak and death occurs due to heart failure. In infantile beriberi, the first symptoms are restlessness, sleeplessness and cardiac failure.

7. Vitamin B2 or Riboflavin

Riboflavin deficiency is characterized by

The lesions at the angles of the mouth are termed as angular stomatitis.

The tongue in general is acutely inflamed called as glossitis.

c) Skin lesions occur on the nasolabial folds and on the ears as shown in the picture below.

Cheilosis which is the dry chapped appearance of the lips.

Niacin deficiency causes the disease pellagra in humans. Pellagra is also called Disease of 3D's. Because the disease has the symptoms of diarrhoea, dermatitis and depression. The disease is characterized by the following.

Glossitis and diarrhoea - These are the two outstanding symptoms. Nausea and vomiting are seen in most cases.

The dermatitis is the most characteristic symptom of the disease. The commonest sites are the back of the fingers and hands, the forearms, and the neck. The following pictures show dermatitis on hands and neck.

9. Vitamin B6 or Pyridoxine

Pyridoxine deficiency results in the following

Angular stomatitis, glossitis and cheilosis in pregnant and lactating mothers.

The visible signs of deficiency include nausea, vomiting, tremor of the outstretched hands, irritability and burning feet syndrome.

Vitamin B12 deficiency causes perinicious anemia in humans. Soreness and inflammation of the tongue are commonly observed. Parasthesia (numbness and tingling) occurs in fingers and toes. Persons living exclusively on vegetarian diets develop vitamin B12 deficiency.