The procedure for obtaining organisms with the same genetic information.

The procedure for obtaining organisms with the same genetic information. You need to collect an egg cell from a donor (a female sheep, mouse or cat). Then you need to carefully remove the nucleus from the cell and collect another cell from the skin, udder or other tissue from another male or female donor of the same species (i.e. fromanother sheep, mouse or cat). From this cell, you also need to remove the cell nucleus and place it in the empty egg. The egg obtained in such a way needs to be treated with a gentle electric shock. The egg should begin to divide and grow into a multicellular embryo. At this stage, the embryo needs to be implanted into the uterus of a surrogate mother. If the pregnancy develops and the animal is born (Fig. 12). 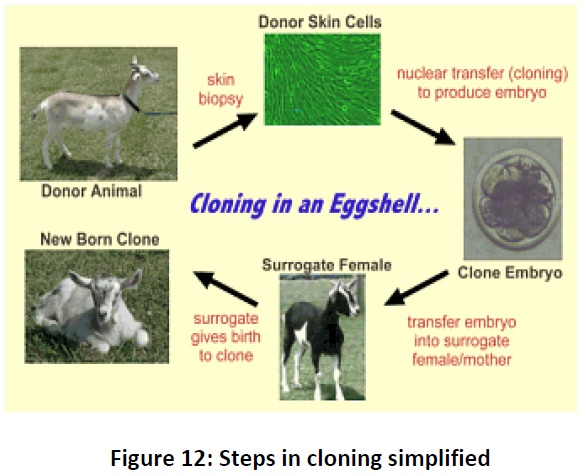 Creating a clone of your favorite animal seems like a great way to insure your pet will be with you forever. Although this might be a goal of cloning, it is not the primary focus of biotech specialists. Commercialization of cloning allows desirable traits to be reliably propagated. Animal breeders are able to clone animals with superior traits such as cows with high milk production or champion racehorses. Embryo twinning (splitting embryos in half) was the first method of cloning used to produce identical twin cattle. Since the twins are the result of mixing the genetic material from two parents, the exact genetic make-up of the animal is not known until it has matured. Dolly (the veryfamous sheep that was the first mammal ever cloned in the lab), however, was created from a single cell, not an embryo. DNA from a donor cell is inserted into an egg that has had its own DNA removed. It is a very delicate and difficult process. So far, animals successfully cloned include sheep, goats, pigs, cattle, cats, deer and dogs.

One can imagine future uses of cloning that could include using preserved DNA to help maintain endangered species or even recover extinct species!

Ø           Limits to Cloning: The donor cell must come from a livingorganism: an organism is also shaped by its environment, success rate for cloning is very low and clones may be old before their time.

Ø           The future of cloning: preservation of endangered animals,studying the effect of drugs etc on duplicates, improve agricultural production (Fig. 13) 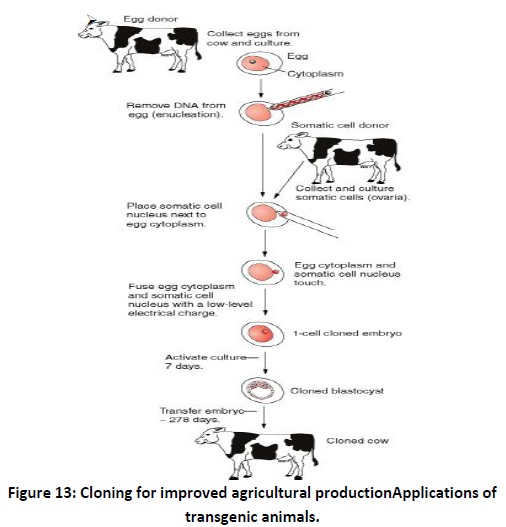