Cell culture is one of the major tools used in cellular and molecular biology, providing excellent model systems for studying the normal physiology and biochemistry of cells (e.g., metabolic studies, aging), the effects of drugs and toxic compounds on the cells, and mutagenesis and carcinogenesis.

Cell culture is one of the major tools used in cellular and molecular biology, providing excellent model systems for studying the normal physiology and biochemistry of cells (e.g., metabolic studies, aging), the effects of drugs and toxic compounds on the cells, and mutagenesis and carcinogenesis. It is also used in drug screening and development, and large scale manufacturing of biological compounds (e.g., vaccines, therapeutic proteins). The major advantage of using cell culture for any of these applications is the consistency and reproducibility of results that can be obtained from using a batch of clonal cells. When the cells are removed from the organ fragments prior to, or during cultivation, thus disrupting their normal relationships with neighboring cells, it is called cell culture.

Tissue culture is the general term for the removal of cells from an animal or plant and their subsequent growth in a favorable artificial environment. The cells may be removed from the tissue directly and disaggregated by enzymatic or mechanical means before cultivation, or they may be derived from a cell line or cell strain that has already beenalready established. The culture of whole organs or intact organ fragments with the intent of studying their continued function or development is called organ culture.

Primary culture refers to the stage of the culture after the cells are isolated from the tissue and proliferated under the appropriate conditions until they occupy all of the available substrate (i.e., reach confluence). There are two basic methods for doing this.

i.          Explant Cultures, small pieces of tissue are attached to a glass ortreated plastic culture vessel and bathed in culture medium. After a few days, individual cells will move from the tissue explant out on the culture vessel surface or substrate where they will begin to divide and grow.

ii.        Enzymatic Dissociation more widely used method speeds up thisprocess by adding digesting enzymes, such as trypsin or collagenase, to the tissue fragments to dissolve the cement holding the cells together. This creates a suspension of single cells that are then placed into culture vessels containing culture medium and allowed to grow and divide.

When the cells in the primary culture vessel have grown and filled up all of the available culture substrate, they must be subcultured (i.e., passaged) by transferring them to a new vessel with fresh growth medium to provide more room for continued growth.

An alternative to establishing cultures by primary culture is to buy established cell cultures from organization such as the AmericanType Culture Collection (ATCC) or the Coriell Institute for Medical Research.

·        Cell Line: After the first subculture, the primary culture becomesknown as a cell line or subclone.Cell lines derived from primary cultures have a limited life span (i.e., they are finite), and as they are passaged, cells with the highest growth capacity predominate, resulting in a degree of genotypic and phenotypic uniformity in the population.

·        Cell Strain: If a subpopulation of a cell line is positively selectedfrom the culture by cloning or some other method, this cell line becomes a cell strain. A cell strain often acquires additional genetic changes subsequent to the initiation of the parent line.

·        Finite vs. Continuous Cell Lines: Normal cells usually divide onlya limited number of times before losing their ability to proliferate, which is a genetically determined event known as senescence; these cell lines are known as Finite. However, some cell lines become immortal through a process called transformation, which can occur spontaneously or can be chemically or virally induced. When a finite cell line undergoestransformation and acquires the ability to divideindefinitely, it becomes a Continuous cell line.

There are two basic systems for growing cells in culture, as monolayers on an artificial substrate (i.e., adherent culture) or free-floating in the culture medium (suspensionculture). The majority of the cells derived from vertebrates, with the exception of hematopoietic cell lines and a few others are anchorage-dependent and have to be cultured on a suitable substrate that is specifically treated to allow cell adhesion and spreading (i.e., tissue-culture treated). However, many cell lines can also be adapted for suspension culture. Similarly, most of the commercially available insect cell lines grow well in monolayer orsuspension culture. Cells that are cultured in suspension can be maintained in culture flasks that are not tissue-culture treated, but as the culture volume to surface area is increased beyond which adequate gas exchange is hindered (usually 0.2–0.5 mL/cm2), the medium requires agitation. This agitation is usually achieved with a magnetic stirrer or rotating spinner flasks. 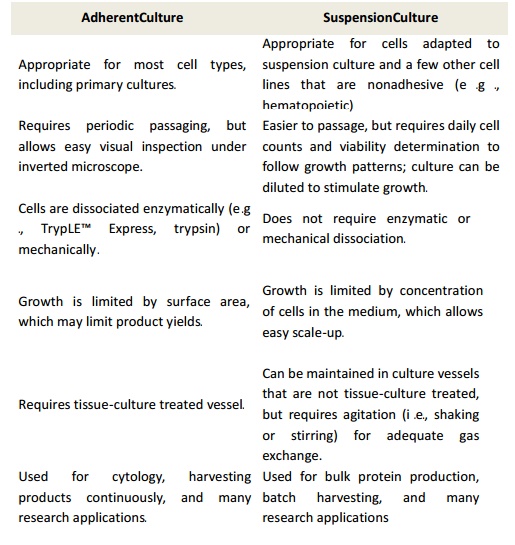 Once a culture is initiated, whether it is a primary culture or a subculture, it will need periodic medium changes. For example, HeLa cells are usually subcultured once per week. Other cell lines may be subcultured only every two, three or even four weeks.

Prior to use, cells should always be checked for any signs of deterioration, such as granularity around the nucleus, cytoplasmic vacuolation, or rounding of the cells with detachment from substrate. Such signs may imply that the culture requires a medium change or may indicate a more serious problem (inadequate or toxic serum/medium, microbial contamination or senescence of the cell line).

Replacement of the Medium:

Four factors indicate the need for the replacement of culture medium,

1.        Drop in pH: Most cells stop growing as the pH falls from pH7.0 topH 6.5 and start to lose viability between pH 6.5 and pH 6.0. (Asthe pH drops, the indicator in the mediumchanges from red through orange to yellow.)

4.        Deterioration of Morphology: This factor should be checkedfrequently. You should always be aware of the morphology since this may reveal the presence of contamination.