Contamination of cell cultures is the common problem encountered in cell culture laboratories, sometimes with very serious consequences. Cell culture contaminants can be divided into two main categories, chemical contaminants such as impurities in media, sera, and water, endotoxins, plasticizers, and detergents, and biologicalcontaminants such as bacteria, molds, yeasts, viruses, mycoplasma, aswell as cross contamination by other cell lines. While it is impossible to eliminate contamination entirely, it is possible to reduce its frequency and seriousness by gaining a thorough understanding of their sources and by following good aseptic technique. This section provides an overview of major types of biological contamination. Bacterialcontamination is easily detected by visual inspection of the culture within a few days of it becoming infected; infected cultures usually appear cloudy (i.e., turbid), sometimes with a thin film on the surface. Sudden drops in the pH of the culture medium are also frequently encountered. Under a low power microscope, the bacteria appear as tiny, moving granules between the cells, and observation under a high-power microscope can resolve the shapes of individual bacteria. The simulated images below show an adherent 293 cell culture contaminated with E. coli 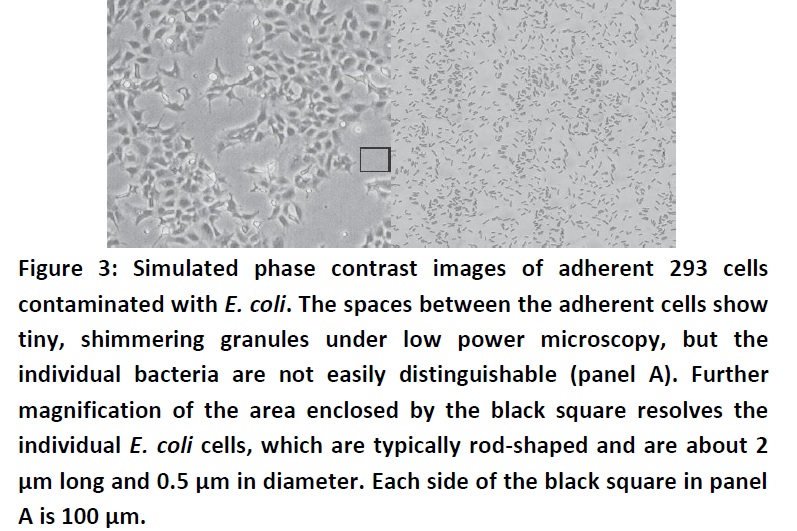 Figure 3: Simulated phase contrast images of adherent 293 cells contaminated with E. coli. The spaces between the adherent cells show tiny, shimmering granules under low power microscopy, but the individual bacteria are not easily distinguishable (panel A). Further magnification of the area enclosed by the black square resolves the individual E. coli cells, which are typically rod-shaped and are about 2 μm long and 0.5 μm in diameter. Each side of the black square in panel A is 100 μm.

Yeasts are unicellular eukaryotic microorganisms in the kingdom of Fungi, ranging in size from a few micrometers (typically) up to 40 micrometers (rarely). Like bacterial contamination, cultures contaminated with yeasts become turbid, especially if the contamination is in an advanced stage. There is very little change in the pH of the culture contaminated by yeasts until the contamination becomes heavy,at which stage the pH usually increases. Under microscopy, yeast appears as individual ovoid or spherical particles, which may bud off smaller particles. The simulated image below shows adherent 293 cell culture 24 hours after plating that is infected with yeast (Fig. 4). 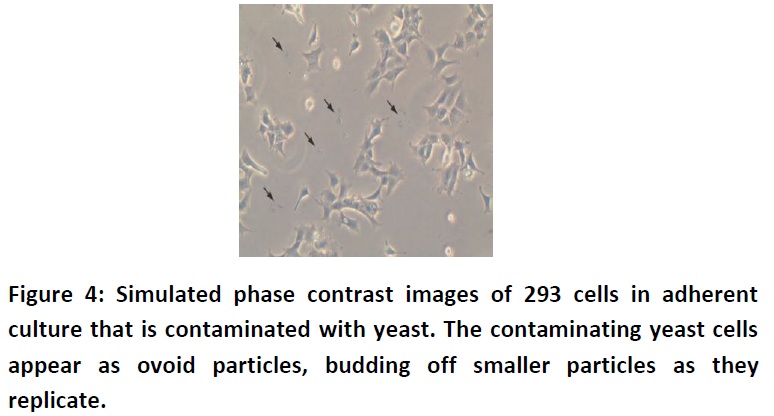 Similar to yeast contamination, the pH of the culture remains stable in the initial stages of contamination, then rapidly increases as the culture become more heavily infected and becomes turbid. Under microscopy, the mycelia usually appear as thin, wisp-like filaments, and sometimes as denser clumps of spores. Spores of many mold species can survive extremely harsh and inhospitable environments in their dormant stage, only to become activated when they encounter suitable growth conditions. Viruses are microscopic infectious agents that take over the host cells machinery to reproduce. Their extremely small size makes them very difficult to detect in culture, and to remove them from reagents used in cell culture laboratories. Because most viruses have very stringent requirements for their host, they usually do not adversely affect cell cultures from species other than their host. However, using virally infected cell cultures can present a serious health hazard to thelaboratory personnel, especially if human or primate cells are cultured in the laboratory. Viral infection of cell cultures can be detected by electron microscopy, immunostaining with a panel of antibodies, ELISA assays, or PCR with appropriate viral primers.