To test the potential cytotoxicity of compounds/cells, consider the following parameters:

Cell viability and toxic effects can be assayed using Roche s easy-to-apply one-step Cell Viability Imaging Kit. The indicators of cytotoxicity can vary, depending on the study performed (e.g., Roche Applied Science Cytotoxicity Detection Kit Plus, (LDH)). The cytotoxicity effect can lead to the death of the cells or just to an alteration of their metabolism. This toxic effect can be initiated by addition of compounds or by addition of effector cells. Demonstrating the lack of toxicity of a given compound may require subtle analysis of its interaction with specific targets, e.g. a study of its ability to alter cell signaling or to initiate cell interactions that would give rise to an inflammatory or allergic response.

To test the potential cytotoxicity of compounds/cells, consider the following parameters:

1.     Concentration of Compound: A wide range of concentrations shouldbe tested to determine the survival curve.

2.     Medium/Serum: In some cases, the serum may have a maskingeffect and lead to an underestimation of the cytotoxicity effect.

3.     Duration of the Exposure: The action of one compound can happen within a few seconds or over several hours. Cell Density For most of the assays, confluent cells is not used. However, if you want to study the endothelial barrier function, you will need confluent cells in order to see an effect.

4.     Colony Size: Some agents are cytostatic, i.e. they inhibit cellproliferation but are not cytotoxic. During continuous exposure they may reduce the size of colonies without reducing the number of colonies. In this case, the size of the colonies should be determined by densitometry, automatic colony counting or counting the number of cells per colony with the naked eye.

5.     Solvents: Some agents to be tested have low solubilities in aqueousmedia, and it may be necessary to use an organic solvent to dissolve them. Ethanol, propylene glycol and dimethyl sulfoxide have been used for this purpose, but may themselves be toxic to cells. The final concentration of solvent should be maintained as low as possible (<0.5 %) and a solvent control must always be included in the study. Be aware that some organic solvents are not compatible with plastics.

6.     The Dose-response relationship describes the biological effect induced by different concentrations of a substance (Fig. 7). This curve should be determined whenever a new study is initiated, in order to fix the optimal conditions for the assay. 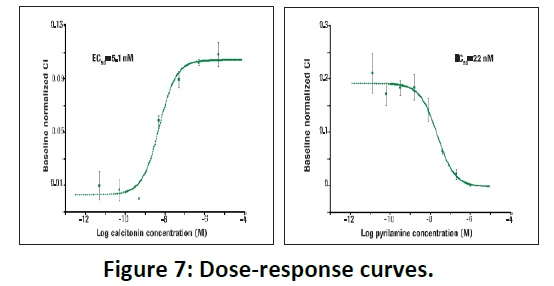