Growing cells in the laboratory is known as cell culture.

Growing cells in the laboratory is known as cell culture. Human embryonic stem cells (hESCs) are generated by transferring cells from a preimplantationstage embryo into a plastic laboratory culture dish that contains a nutrient broth known as culture medium. The cells divide and spread over the surface of the dish. The inner surface of the culture dish is typically coated with mouse embryonic skin cells that have been treated so they will not divide. This coating layer of cells is called afeeder layer. The mouse cells in the bottom of the culture dish provide the cells a sticky surface to which they can attach. Also, the feeder cells release nutrients into the culture medium. Researchers have devised ways to grow embryonic stem cells without mouse feeder cells. This is a significant scientific advance because of the risk that viruses or other macromolecules in the mouse cells may be transmitted to the human cells.

The process of generating an embryonic stem cell line is somewhat inefficient, so lines are not produced each time cells from the preimplantation stage embryo are placed into a culture dish. However, if the plated cells survive, divide, and multiply enough to crowd the dish, they are removed gently and plated into several fresh culture dishes. The process of re-plating or subculturingthe cells is repeated many times and for many months. Each cycle of subculturing the cells is referred to as a passage. Once the cell line is established, the original cells yield millions of embryonic stem cells. Embryonic stem cells that have proliferated in cell culture for six or more months without differentiating, are pluripotent, and appear genetically normal are referred to as an embryonic stem cell line. At any stage in the process, batches of cells can be frozen and shipped to other laboratories for further culture and experimentation. 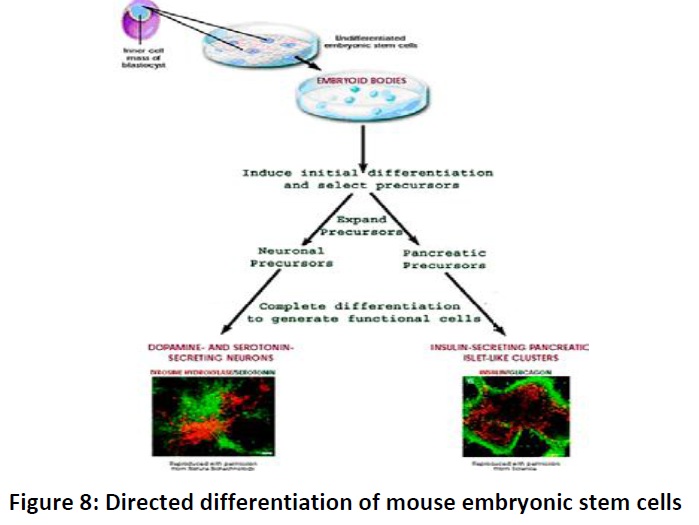 If scientists can reliably direct the differentiation of embryonic stem cells into specific cell types, they may be able to use the resulting, differentiated cells to treat certain diseases in the future. Diseases that might be treated by transplanting cells generated from human embryonic stem cells include diabetes, traumatic spinal cord injury,Duchenne’s muscular dystrophy, heart disease, and vision and hearing loss.

The history of research on adult stem cells began about 50 years ago. In the 1950s, researchers discovered that the bone marrow contains at least two kinds of stem cells. One population, called hematopoietic stem cells, forms all the types of blood cells in the body. A second population, called bone marrow stromal stem cells (also called mesenchymal stem cells, or skeletal stem cells by some) was discovered a few years later. These non-hematopoietic stem cells make up a small proportion of the stromal cell population in the bone marrow and cangenerate bone, cartilage, and fat cells that support the formation of blood and fibrous connective tissue. In the 1960s, scientists who were studying rats discovered two regions of the brain that contained dividing cells that ultimately become nerve cells. Despite these reports, most scientists believed that the adult brain could not generate new nerve cells. It was not until the 1990s that scientists agreed that the adult brain does contain stem cells that are able to generate the brain’s three major cell types - astrocytes and oligodendrocytes, which are non-neuronal cells, and neurons, or nerve cells. 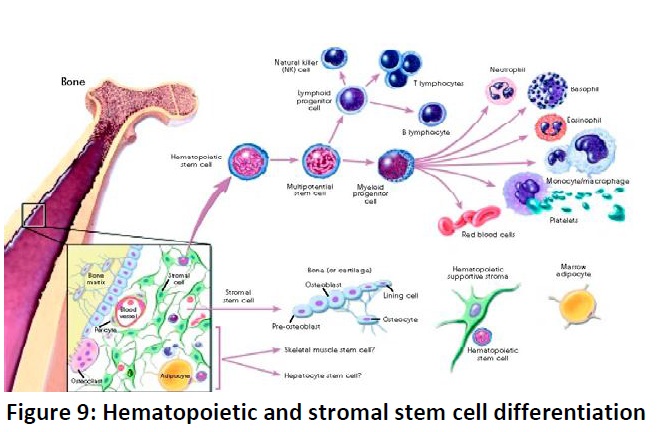 A number of experiments have reported that certain adult stem cell types can differentiate into cell types seen in organs or tissues other than those expected from the cells’ predicted lineage (i.e., brain stem cells that differentiate into blood cells or blood-forming cells that differentiate into cardiac muscle cells, and so forth). Although isolated instances of transdifferentiation have been observed in some vertebrate species, whether this phenomenon actually occurs in humans is under debate by the scientific community. Instead of transdifferentiation, the observed instances may involve fusion of a donor cell with a recipient cell. Another possibility is that transplanted stem cells are secreting factors that encourage the recipient’s own stem cells to begin the repair process. Even when transdifferentiation has been detected, only a very small percentage of cells undergo the process.

In a variation of transdifferentiation experiments, scientists have recently demon strated that certain adult cell types can be “reprogrammed” into other cell types in vivo using a well-controlled process of genetic modification. This strategy may offer a way to reprogram available cells into other cell types that have been lost or damaged due to disease. For example, one recent experiment shows how pancreatic beta cells, the insulin-producing cells that are lost ordamaged in diabetes, could possibly be created by reprogramming other pancreatic cells. By “re-starting” expression of three critical beta cell genes in differentiated adult pancreatic exocrine cells, researchers were able to create beta cell-like cells that can secrete insulin. The reprogrammed cells were similar to beta cells in appearance, size, and shape; expressed genes characteristic of beta cells; and were able to partially restore blood sugar regulation in mice whose own beta cells had been chemically destroyed. While not transdifferentiation by definition, this method for reprogramming adult cells may be used as a model for directly reprogramming other adult cell types.

In addition to reprogramming cells to become a specific cell type, it is now possible to reprogram adult somatic cells to become like embryonic stem cells (induced pluripotent stem cells, iPSCs) through the introduction of embryonic genes. Thus, a source of cells can be generated that are specific to the donor, thereby avoiding issues of histocompatibility, if such cells were to be used for tissue regeneration. However, like embryonic stem cells, determination of the methods by which iPSCs can be completely and reproducibly committed to appropriate cell lineages is still under investigation.