Use of Animals in Research

Animals play a vital role in primary research. The use of animal models permits more rapid assessment of the effects of new medical treatments and other products.

Use of Animals in Research

·        Animals play a vital role in primary research. The use of animal models permits more rapid assessment of the effects of new medical treatments and other products. Computer models and invitro studies of cell cultures are often used as supplements toanimal research, but they can't entirely duplicate the results in living organisms. Recent developments in animal biotechnology

have changed medicine, agriculture, and the efforts to preserve endangered animals.

·     For a new product to be approved for human use, the manufacturer must first demonstrate that it is safe for use. Trials are required on cell cultures, in live animals, and on human subjects. Testing on live animal models requires that two or more species be used because different effects are observed in different animals. If problems are detected in the animal tests, human subjects are never recruited for trials. The animals used most often are pure-bred mice and rats, but other species are also used. Another extremely valuable research animal is the zebrafish, a hardy aquarium fish. Dogs are used for the study of cancer, heart disease and lung disorders. HIV and AIDS research is conducted on monkeys and chimpanzees.

·     Animal research is very heavily regulated. The Animal Welfare Act sets standards concerning the housing, feeding, cleanliness and medical care of research animals. Veterinarians also conduct research which has led to new cancer treatments for pets and studies in their adaptations for humans.

·        Cloned in a gene that prevents the parasite from traversing the midgut; blocking the continuation of its life cycle

Pharming: Pharming is not just a misspelled word ! The term"pharming" comes from a combination of the words "farming" and "pharmaceuticals" - a blending of the basic methods of agriculture with advanced biotechnology.

Gene pharming is a technology that scientists use to alter an animal's own DNA, or to splice in new DNA, called a transgene, from another species. In pharming, these genetically modified (transgenic) animals are mostly used to make human proteins that have medicinal value. The protein encoded by the transgene is secreted into the animal's milk, eggs or blood, and then collected and purified (Fig. 14). One interesting GMO organism that has been in the news lately is the “glowing fish.” GloFish ™ fluorescent zebra fish were specially bred to help detect environmental pollutants. 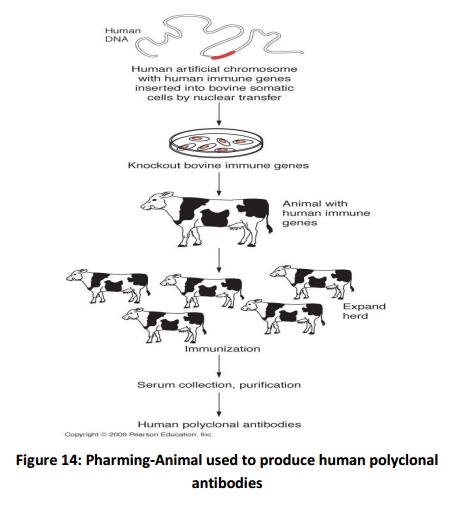