G. J. Mendel (1865) studied the inheritance of well-defined characters of pea plant but for several reasons it was unrecognized till 1900.

G. J. Mendel (1865) studied the inheritance of well-defined characters of pea plant but for several reasons it was unrecognized till 1900. Three scientists (de Vries, Correns and Tschermak) independently rediscovered Mendel’s results on the inheritance of characters. Various cytologists also observed cell division due to advancements in microscopy. This led to the discovery of structures inside nucleus. In eukaryotic cells, worm-shaped structures formed during cell division are called chromosomes (colored bodies, visualized by staining). An organism which possesses two complete basic sets of chromosomes are known as diploid. A chromosome consists of long, continuous coiled piece of DNA in which genes are arranged in linear order. Each gene has a definite position (locus) on a chromosome. These genes are hereditary units. Chromosomal theory of inheritance states that Mendelian factors (genes) have specific locus (position) on chromosomes and they carry information from one generation to the next generation.

The important cytological findings related to the chromosome theory of inheritance are given below.

Wilhelm Roux (1883) postulated that the chromosomes of a cell are responsible for transferring heredity.

T. Boveri (1902) supported the idea that the chromosomes contain genetic determiners, and he was largely responsible for developing the chromosomal theory of inheritance.

W.S. Sutton (1902), a young American student independently recognized a  parallelism (similarity) between the  behaviour of chromosomes and Mendelian factors during gamete formation.  Sutton and Boveri (1903) independently proposed the chromosome theory of inheritance. Sutton united the knowledge of chromosomal segregation with Mendelian principles and called it chromosomal theory of inheritance. 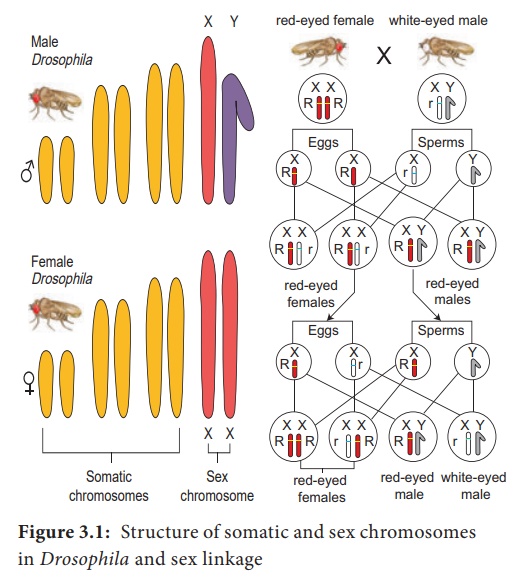 2. Salient features of the Chromosomal theory of inheritance

·        Somatic cells of organisms are derived from the zygote by repeated cell division (mitosis). These consist of two identical sets of chromosomes. One set is received from female parent (maternal) and the other from male parent (paternal). These two chromosomes constitute the homologous pair.

·        Chromosomes retain their structural uniqueness and individuality throughout the life cycle of an organism.

·        Each chromosome carries specific determiners or Mendelian factors which are now termed as genes.

·        The behaviour of chromosomes during the gamete formation (meiosis) provides evidence to the fact that genes or factors are located on chromosomes.

3. Support for chromosomal theory of heredity

This theory was widely discussed and controversies by scientists around the world. However, this debate has been finally cleared by the works of Thomas Hunt Morgan (1910) on the fruit  fly Drosophila melanogaster (2n=8).

This fruit fly completed their life cycle within two weeks. The alleles for red or white eye colour are present on the X chromosome but there is no counter part for this gene on the Y chromosome.

Thus, females have two alleles for this gene, whereas males have only one (Figure 3.1). The genetic results were completely based on meiotic behaviour of the X and Y chromosomes. Similarly, the genes for yellow body colour and miniature wings are also carried on the X chromosome. This study strongly supports the idea that genes are located on chromosomes. The linked genes connected together on sex chromosome is called sex linkage.

Comparison between gene and chromosome behavior

Around twentieth century cytologists established that, generally the total number of chromosomes is constant in all cells of a species. A diploid eukaryotic cell has two haploid sets of chromosomes, one set from each parent. All somatic cells of an organism carry the same genetic complement. The behaviour of chromosomes during meiosis not only explains Mendel’s principles but leads to new and different approaches to study about heredity. 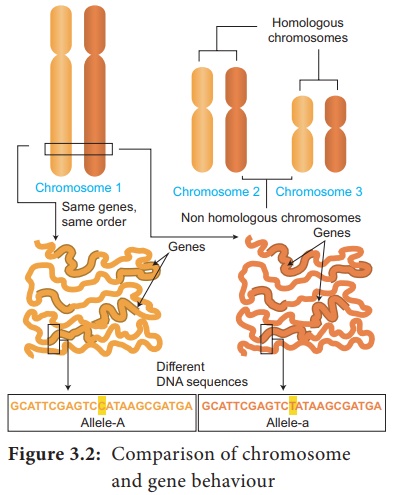 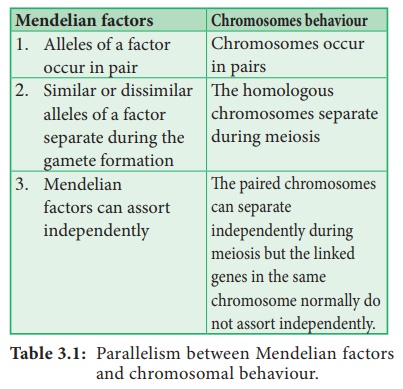 The important aspects to be remembered about the chromosome behaviour during cell division (meiosis) are as follows.

·         In the S phase of meiotic interphase each chromosome replicates forming two copies of each allele (AA/aa), one on each chromatid.

·         In anaphase II of meiosis, separation of sister chromatids of homologous chromosomes takes place. Therefore, each daughter cell (gamete) carries only a single allele (gene) of a character (A), (A), (a) and (a). 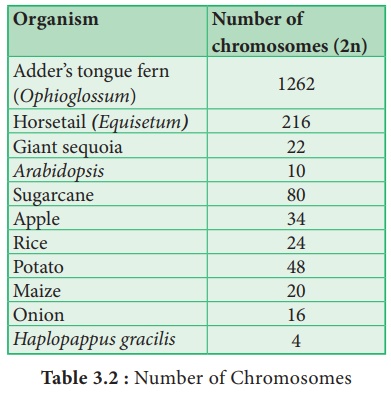 Thomas Hunt Morgan (1933) received Nobel Prize in Physiology or Medicine for his discoveries concerning the role played by chromosomes in heredity.