Genetic variation among individuals provides the raw material for the ultimate source of evolutionary changes.

Genetic variation among individuals provides the raw material for the ultimate source of evolutionary changes. 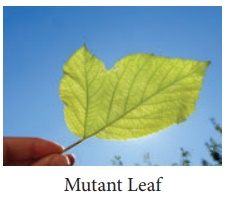 Mutation and recombination are the two major processes responsible for genetic variation. A sudden change in the genetic Mutant Leaf material of an organisms is called  mutation.  The  term  mutation  was introduced by Hugo de Vries (1901) while he has studying on the plant, evening primrose (Oenothera lamarkiana) and proposed ‘Mutation theory’.

There are two broad types of changes in genetic material. They are point mutation and chromosomal mutations.

Mutational events that take place within individual genes are called gene mutations or point mutation, whereas the changes occur in structure and number of chromosomes is called chromosomal mutation. Agents which are responsible for mutation are called mutagens, that increase the rate of mutation. Mutations can occur either spontaneously or induced. The production of mutants through exposure of mutagens is called mutagenesis, and the organism is said to be mutagenized. 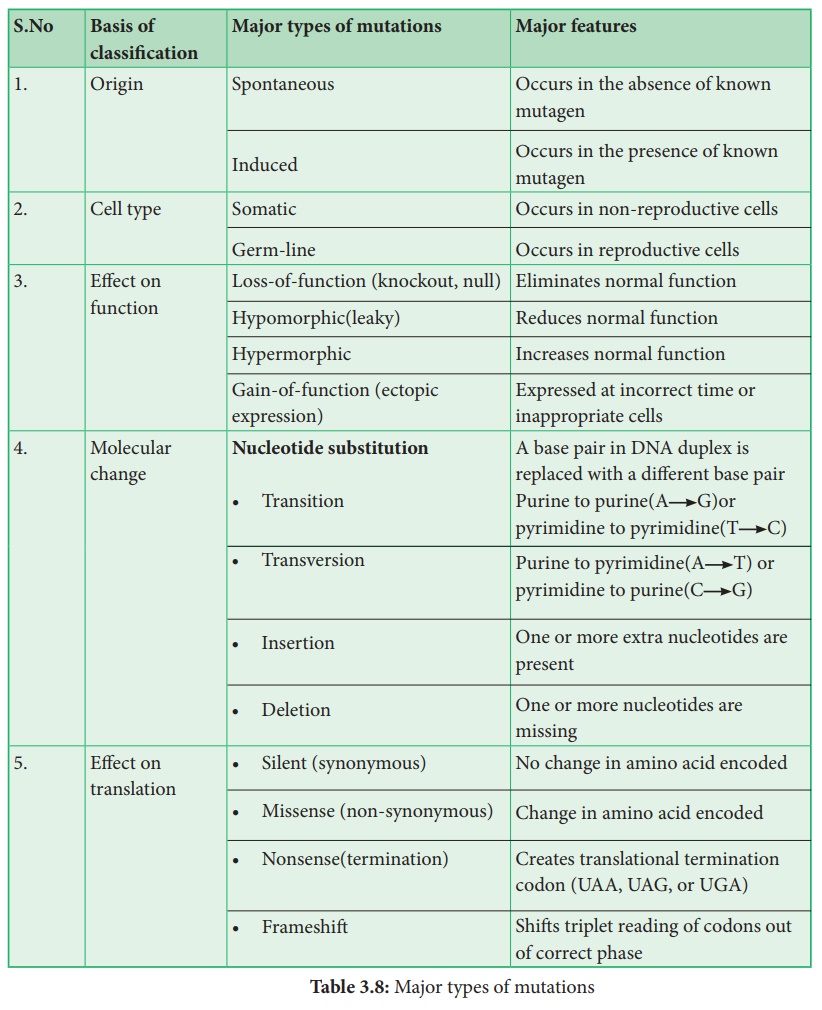 Let us see the two general classes of gene mutation: 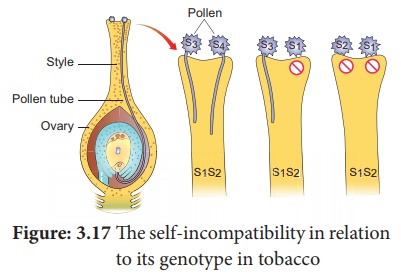 Substitution mutations or indel mutations affect translation. Based on these different types of mutations are given below.

The factors which cause genetic mutation are called mutagenic agents or mutagens. Mutagens are of two types, physical mutagen and chemical mutagen. Muller (1927) was the first to find out physical mutagen in Drosophila.

Temperature: Increase in temperature increases the rate of mutation. While rise in temperature, breaks the hydrogen bonds between two DNA nucleotides which affects the process of replication and transcription.

Sharbati Sonora is a mutant variety of wheat, which is developed from Mexican variety (Sonora 64) by irradiating of gamma rays. It is the work of Dr. M.S.Swaminathan who is known as ‘Father of Indian green revolution’ and his team.

Castor Aruna is mutant variety of castor which is developed by treatment of seeds with thermal neutrons in order to induce very early maturity (120 days instead of 270 days as original variety).

Chemicals  which  induce  mutation  are called chemical mutagens. Some chemical mutagens are mustard gas, nitrous acid, ethyl and methyl methane sulphonate (EMS and MMS), ethyl urethane, magnous salt, formaldehyde, eosin and enthrosine. Example: Nitrous oxide alters the nitrogen bases of DNA and disturb the replication and transcription that leads to the formation of incomplete and defective polypeptide during translation.

The compounds which are not having own mutagenic properties but can enhance the effects of known mutagens are called comutagens.

Caffeine increase the toxicity of methotrexate

Sometimes the chromosome number of somatic cells are changed due to addition or elimination of individual chromosome or basic set of chromosomes. This condition in known as numerical chromosomal aberration or ploidy. There are two types of ploidy.

(i). Ploidy involving individual chromosomes within a diploid set (Aneuploidy) 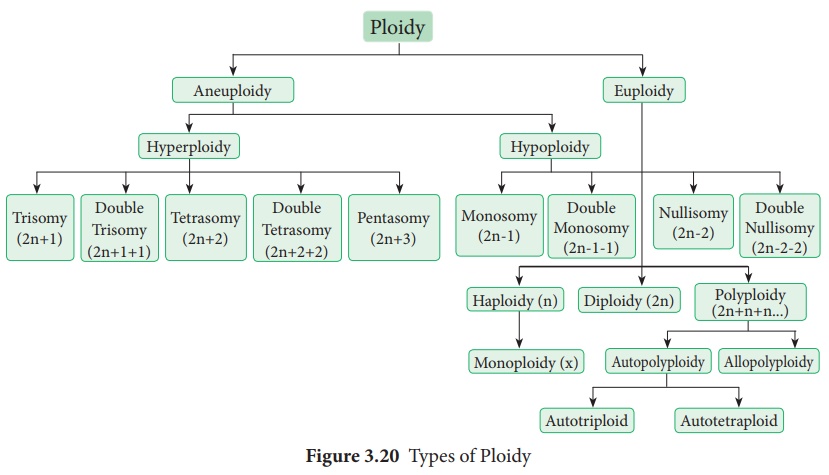 It is a condition in which diploid number is altered either by addition or deletion of one or more chromosomes. Organisms showing aneuploidy are known as aneuploids or heteroploids . They are of two types, Hyperploidy and Hypoploidy (Figure 3.21). 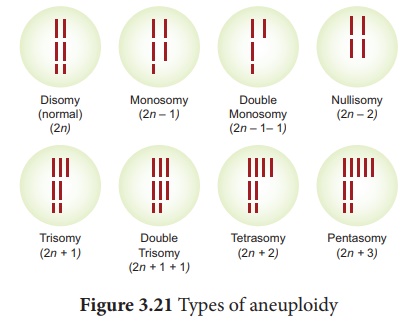 Addition of one or more chromosomes to diploid sets are called hyperploidy. Diploid set of chromosomes represented as Disomy. Hyperploidy can be divided into three types. They are as follows,

Loss of one or more chromosome from the diploid set in the cell is called hypoploidy. It can be divided into two types. They are

Euploidy is a condition where the organisms possess one or more basic sets of chromosomes. Euploidy is classified as monoploidy, diploidy and polyploidy. The condition where an organism or somatic cell has two sets of chromosomes are called diploid (2n). Half the number of somatic chromosomes is referred as gametic chromosome number called haploid(n). It should be noted that haploidy (n) is different from a monoploidy (x). For example, the common wheat plant is a polyploidy (hexaploidy) 2n=6x=72 chromosomes. Its haploid number (n) is 36, but its monoploidy (x) is 12. Therefore, the haploid and diploid condition came regularly one after another and the same number of chromosomes is maintained from generation to generation, but monoploidy condition occurs when an organism is under polyploidy condition. In a true diploid both the monoploid and haploid chromosome number are same. Thus a monoploid can be a haploid but all haploids cannot be a monoploid.

The organism which possesses more than two haploid sets of chromosomes derived from within the same species is called autopolyploid. They are divided into two types. Autotriploids and autotetraploids.

Autotriploids have three set of its own genomes. They can be produced artificially by crossing between autotetraploid and diploid species. They are highly sterile due to defective gamete formation. Example: The cultivated banana are usually triploids and are seedless having larger fruits than diploids. Triploid sugar beets have higher sugar content than diploids and are resistant to moulds. Common doob grass (Cyanodon dactylon) is a natural autotriploid. Seedless watermelon, apple, sugar beet, tomato, banana are man made autotriploids.

Autotetraploids have four copies of its own genome. They may be induced by doubling the chromosomes of a diploid species. Example: rye, grapes, alfalfa, groundnut, potato and coffee.

An organism which possesses two or more basic sets of chromosomes derived from two different species is called allopolyploidy. It can be developed by interspecific crosses and fertility is restored by chromosome doubling with colchicine treatment. Allopolyploids are formed between closely related species only. (Figure 3.22) 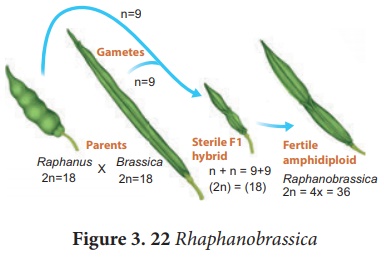 Example:1 Raphanobrassica, G.D. Karpechenko (1927) a Russian geneticist, crossed the radish (Raphanus sativus, 2n=18) and cabbage (Brassica oleracea, 2n=18) to produce F1 hybrid which was sterile. When he doubled the chromosome of F1 hybrid he got it fertile. He expected this plant to exhibit the root of radish and the leaves like cabbage, which would make the entire plant edible, but the case was vice versa, so he was greatly disappointed.

Example: 2 Triticale, the successful first man made cereal. Depending on the ploidy level Triticale can be divided into three main groups.

(i). Tetraploidy: Crosses between diploid wheat and rye.

Hexaploidy Triticale hybrid plants demonstrate characteristics of both macaroni wheat and rye. For example, they combine the high-protein content of wheat with rye’s high content of the amino acid lysine, which is low in wheat. It can be explained by chart below (Figure: 3.23). 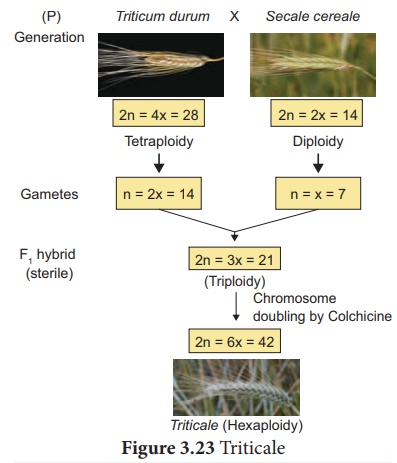 Colchicine , an alkaloid is extracted from root and corms of Colchicum autumnale, when applied in low concentration to the growing tips of the plants it will induce polyploidy. Surprisingly it does not affect the source plant Colchicum, due to presence of anticolchicine.

·         Many polyploids are more vigorous and more adaptable than diploids.

·         Many ornamental plants are autotetraploids and have larger flower and longer flowering duration than diploids.

·         Autopolyploids usually have increase in fresh weight due to more water content.

·         Aneuploids are useful to determine the phenotypic effects of loss or gain of different chromosomes.

·         Many angiosperms are allopolyploids and they play a role in an evolution of plants.

Structural variations caused by addition or deletion of a part of chromosome leading to rearrangement of genes is called structural chromosomal aberration. It occurs due to ionizing radiation or chemical compounds. On the basis of breaks and reunion in chromosomes, there are four types of aberrations. They are classified under two groups.

A. Changes in the number of the gene loci

B. Changes in the arrangement of gene loci

Loss of a portion of chromosome is called deletion. On the basis of location of breakage on chromosome, it is divided into terminal deletion and intercalary deletion. It occurs due to chemicals, drugs and radiations. It is observed in Drosophila and Maize. (Figure 3.24)

There are two types of deletion:

ii.            Intercalary  deletion or interstitial deletion: It is caused by two breaks and reunion of terminal parts leaving the middle.

Both deletions are observable during meiotic pachytene stage and polytene chromosome. The unpaired loop formed in the normal chromosomal part at the time of chromosomal pairing. Such loops are called as deficiency loops and it can be seen in meiotic prophase. Larger deletions may lead to lethal effect.

The process of arrangement of the same order of genes repeated more than once in the same chromosome is known as duplication. 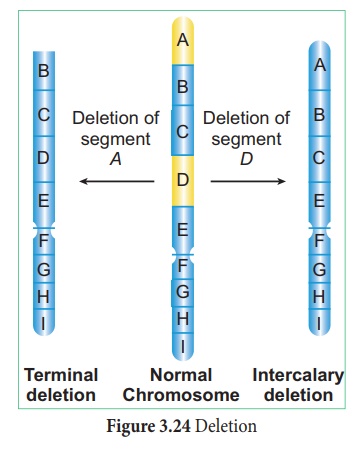 Due to duplication some genes are present in more than two copies. It was first reported in Drosophila by Bridges (1919) and other examples are Maize and Pea. It is three types.

The duplicated segment is located immediately after the normal segment of the chromosome in the same order.

The duplicated segment is located immediately after the normal segment but the gene sequence order will be reversed.

The duplicated segment is located in the same chromosome, but away from the normal segment. (Figure 3.25) 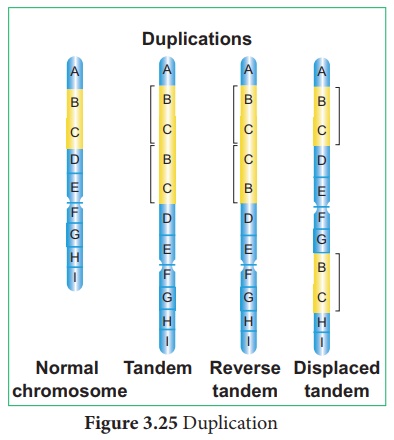 A rearrangement of order of genes in a chromosome by reversed by an angle 1800. This involve two chromosomal breaks and reunion. During this process there is neither gain nor loss but the gene sequences is rearranged. Inversion was first reported in Drosophila by Sturtevant (1926). There are two types of inversion, paracentric and pericentric (Figure 3.26). 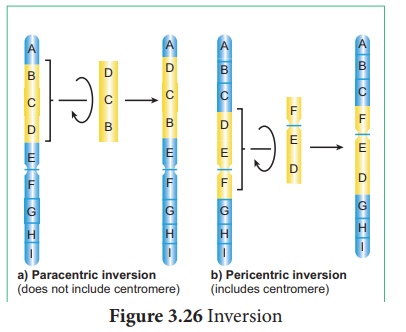 i. Paracentric inversion: An inversion which takes place apart from the centromere

ii. Pericentric inversion: An inversion that includes the centromere.

Inversions lead to evolution of a new species.

A single break is made in only one chromosome. The broken segment gets attached to one end of a non-homologous chromosome. It occurs very rarly in nature.

Broken segment of one chromosome gets inserted interstitially in a non-homologous chromosome.

It involves mutual exchange of chromosomal segments between two non-homologous chromosomes. It is also called illegitimate crossing over. It is further divided into two types (Figure 3.27). 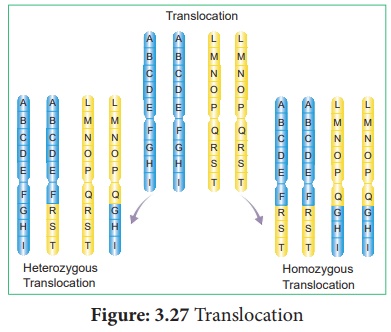 Translocations play a major role in the formation of species.