As the repository of genetic information, DNA occupies a unique and central place among biological macromolecules.

As the repository of genetic information, DNA occupies a unique and central place among biological macromolecules. The structure of DNA is a marvelous device for the storage of genetic information. The term “DNA Metabolism” can be used to describe process by which copies of DNA molecules are made (replication) along with repair and recombination.

DNA Repair: How is genomic stability maintained in all living organisms? How do organisms on earth survive? What is essential for their survival?

DNA is unique because it is the only macromolecule where the repair system exists, which recognises and removes mutations. DNA is subjected to various types of damaging reactions such as spontaneous or environmental agents or natural endogenous threats. Such damages are corrected by repair enzymes and proteins, immediately after the damage has taken place. DNA repair system plays a major role in maintaining the genomic / genetic integrity of the organism. DNA repair systems protect the integrity of genomes from genotoxic stresses.

Recombination: In cells the genetic information within and among DNA molecule are re-arranged by a process called genetic recombination. Recombination is the result of crossing over between the pairs of homologous chromosomes during meiosis. In earlier classes you have learnt chromosomal recombination. In molecular level it involves breakage and reunion of polynucleotides. 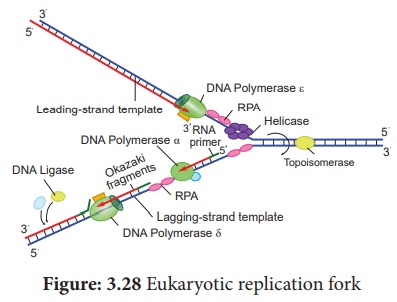 Replication fork is the site (point of unwinding) of separation of parental DNA strands where new daughter strands are formed. Multiple replication forks are found in eukaryotes. The enzyme helicases are involved in unwinding of DNA by breaking hydrogen bonds holding the two strands of DNA and replication protein A (RPA) prevents the separated polynucleotide strand from getting reattached.

Topoisomerase is an enzyme which breaks DNAs covalent bonds and removes positive supercoiling ahead of replication fork. It eliminates the torsional stress caused by unwinding of DNA double helix.

DNA Polymerase β does not play any role in the replication of normal DNA. Function  Removing incorrect bases from damaged DNA. It is involved in Base excision repair.

DNA Synthesis takes place in 5’ → 3’ direction and it is semidiscontinuous. When DNA is synthesized in 5’ → 3’ direction, only in the free 3’ end (OH end) DNA is elongated. In 1960s Reiji Okazaki and his colleagues found out that one of the new DNA strands is synthesized in short pieces called Okazaki fragments. In discontinuous strand where the Okazaki fragments are united by ligase is called Lagging strand where the replication direction is 5’ → 3’ which is opposite to the direction of fork movement.

The continuous strand is called Leading strand where the replication direction is 5’ -> 3’ which is same to the direction to that of the replication fork movement. DNA ligase joins any nicks in the DNA by forming a phosphodiester bond between 3’ hydroxyl and 5’ phosphate group.

What is the special mechanism which replicates chromosomal ends?

After the replication of the chromosomes, the enzyme telomerase adds several more repeats of DNA sequences to the telomeres. Telomerase use short RNA molecules as a template and add repeat sequences on to telomeres (DNA nucleotide polymerisation).

J. Herbert Taylor, Philip Woods and Walter Hughes demonstrated the semiconservative replication of DNA in the root cells of Vicia faba. They labelled DNA with 3H Thymidine, a radioactive precursor of DNA and performed autoradiography. They grew root tips in a medium in the presence of radioactive labelled thymidine, so that the radioactivity was incorporated into the DNA of these cells. The outline of this labelled chromosomes appears in the form of scattered black dots of silver grains on a photographic film. 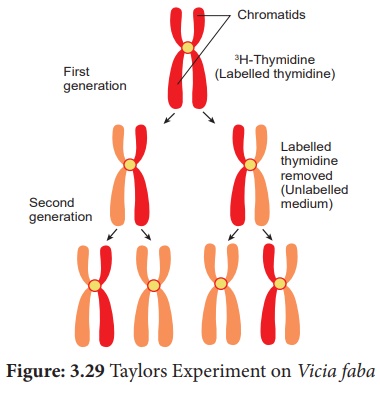 The root tips with labelled chromosomes were placed in an unlabelled medium containing colchicine to arrest the culture at the metaphase and examine the chromosome by autoradiography. The observations were,

1. In the chromosome of first generation the radioactivity was found to be distributed to both the chromatids because in the original strand of DNA double helix was labelled with radioactivitiy and the new strand was unlabelled.

2. In the chromosome of the second generation only one of the two chromatids in each chromosome was radioactive (labelled).

The results proved the semiconservative method of DNA replication.