1. Extra nuclear inheritance is a consequence of presence of genes in

b) Endoplasmic reticulum and mitrochondria

2. In order to find out the different types of gametes produced by a pea plant having the genotype AaBb, it should be crossed to a plant with the genotype

3. How many different kinds of gametes will be produced by a plant having the genotype AABbCC?

4. Which one of the following is an example of polygenic inheritance?

a) Flower colour in Mirabilis Jalapa

b) Production of male honey bee

a) Only round seeds with green cotyledons

b) Only wrinkled seeds with yellow cotyledons

a) Crossing between two genotypes with recessive trait

b) Crossing between two F1 hybrids

c) Crossing the F1 hybrid with a double recessive genotype

8. The genotype of a plant showing the dominant phenotype can be determined by

9. Select the correct statement from the ones given below with respect to dihydrid cross

10. Which Mendelian idea is depicted by a cross in which the F1 generation resembles both the parents

b) Law of dominance

c) Inheritance of one gene

11. Fruit colour in squash is an example of

12. In his classic experiments on Pea plants, Mendel did not use

13. The epistatic effect, in which the dihybrid cross 9:3:3:1 between AaBb Aabb is modified as

a) Dominance of one allele on another allele of both loci

b) Interaction between two alleles of different loci

c) Dominance of one allele to another alleles of same loci

d) Interaction between two alleles of some loci

a) The two genes are located on two different chromosomes

b) Chromosomes failed to separate during meiosis

15. The genes controlling the seven pea characters studied by Mendel are known to be located on how many different chromosomes?

16. Which of the following explains how progeny can posses the combinations of traits that none of the parent possessed?

a) Law of segregation

17. “Gametes are never hybrid”. This is a statement of

a) Law of dominance

b) Law of independent assortment

18. Gene which suppresses other genes activity but does not lie on the same locus is called as

20. The dominant epistatis ratio is

22. Among the following characters which one was not considered by Mendel in his experimentation pea?

b) Trichomal glandular or non-glandular

24. What is meant by true breeding or pure breeding lines / strain?

Answer: A true breeding line means it has undergone continuous self pollination having stable trait inheritance from parent to offspring.

25. Give the names of the scientists who rediscovered Mendelism.

(ii) It involves the cross between the F1 off spring with either of the two parents.

(iii) The recessive back cross helps to identify the heterozygosity of the hybrid.

Answer: Genetics is the branch of biological science which deals with mechanism of transmission of characters from parents to offsprings.

28. What are multiple alleles

Answer: Three or more allelic forms of a gene occupy the same locus in a given pair of homologous chromosomes.

29. What are the reasons for Mendel’s successes in his breeding experiment?

Answer: (i) He applied mathematics and statistical methods to biology and laws of probability to his breeding experiments.

(ii) He followed scientific methods and kept accurate and detailed records that include quantitative data of the outcome of his crosses.

(iii) His experiments were carefully planned and he used large samples.

(iv) The pairs of contrasting characters which were controlled by factor (genes) were present on separate chromosomes.

(v) The parents selected by Mendel were pure breed lines and the purity was tested by self crossing the progeny for many generations.

30. Explain the law of dominance in monohybrid cross.

Answer: (i) These characters are controlled by discrete units called factors which occurs in pairs.

(ii) In a dissimilar pair of factors one member of two pair is dominant and the other is recessive.

(iv) It is also explains the proportion of 3:1 obtained at the F2.

1. Incomplete dominance is the appearance of a third phenotype, which is a combination of both parental alleles when a cross is done between individuals with two different phenotypes.

2. The effect of both alleles are equally conspicuous.

3. Both parental phenotypes are mixed together to form a third phenotype.

5. Both parental alleles can be observed in the off spring.

6. Qualitative approach of the gene expression.

1. Codominance is the appearance of both parental phenotypes together in the off spring when a cross is done between individuals with two different phenotypes.

2. The effect of one of the two parental alleles is more conspicuous.

3. The two parental alleles are not mixed together.

4. Effect of the two parental alleles is intermediate on the offspring.

5. Neither parental alleles can be observed in the offspring.

32. What is meant by cytoplasmic inheritance

Answer: (i) DNA is the universal genetic material.

(iii) But certain traits are governed either by the chloroplast or mitochondrial genes. This phenomenon is known as extra nuclear inheritance. It is a kind of Non-Mendelian inheritance.

(iv) Since it involves cytoplasmic organelles such as chloroplast and mitochondrion that act as inheritance vectors, it is also called Cytoplasmic inheritance.

(v) It is based on independent, self-replicating extra chromosomal unit called plasmogene located in the cytoplasmic organelles, chloroplast and mitochondrion.

33. Describe dominant epistasis with an example.

(i) It is a gene interaction in which two alleles of a gene at one locus interfere and suppress or mask the phenotypic expression of a different pair of alleles of another gene at another locus.

(ii) The gene that suppresses or masks the phenotypic expression of a gene at another locus is known as epistatic.

(iii) The gene whose expression is interfered by non-allelic genes and prevents from exhibiting its character is known as hypostatic.

(iv) When both the genes are present together, the phenotype is determined by the epistatic gene and not by the hypostatic gene.

(v) In the summer squash the fruit colour locus has a dominant allele ‘W’ for white colour and a recessive allele ‘w’ for coloured fruit. ‘W’ allele is dominant that masks the expression of any colour.

(vi) In another locus hypostatic allele ‘G’ is for yellow fruit and its recessive allele  ‘g’ for green fruit. In the first locus the white is dominant to colour where as in the second locus yellow is dominant to green.

(viii) Since W is epistatic to the alleles ‘G’ and ‘g’, the white which is dominant, masks the effect of yellow or green.

(ix) Homozygous recessive ww genotypes only can give the coloured fruits (4/16). Double recessive ‘wwgg’ will give green fruit (1/16). 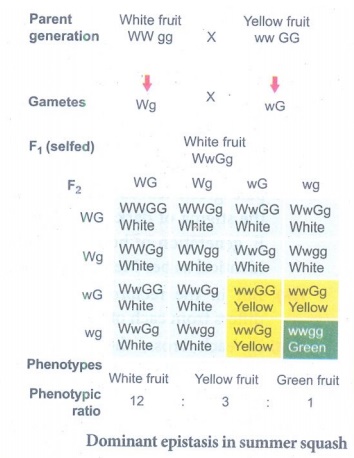 34. Explain polygenic inheritance with an example.

(ii) A group of genes that together determine (contribute) a characteristic of an organism is called polygenic inheritance.

(iii) It gives explanations to the inheritance of continuous traits.

(v) Kernel colour is controlled by two genes each with two alleles. One with red kernel colour was dominant to white.

(viii) The intensity of the red colour is determined by the number of R genes in the F2 generation. 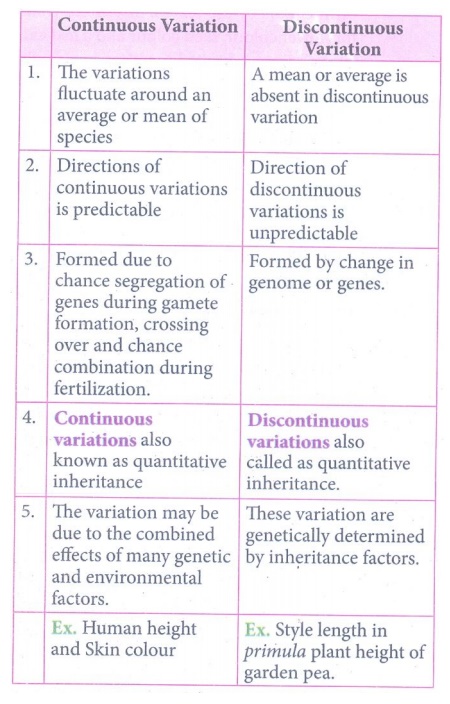 1. The variations fluctuate around an average or mean of species

2. Directions of continuous variations is predictable

3. Formed due to chance segregation of genes during gamete formation, crossing over and chance combination during fertilization.

5. The variation may be due to the combined effects of many genetic and environmental factors.

1. A mean or average is absent in discontinuous variation

2. Direction of discontinuous variations is unpredictable

3. Formed by change in genome or genes.

5. These variation are genetically determined by inheritance factors.

36. Explain with an example how single genes affect multiple traits and alleles the phenotype of an organism.

(i) In Pleiotropy, the single gene affects multiple traits and alter the phenotype of the organism.

(v) This is due to the pattern of inheritance where the three traits were controlled by a single gene with dominant and recessive alleles.

37. Bring out the inheritance of chloroplast gene with an example.

(i) DNA is the universal genetic material. Genes located in nuclear chromosomes follow Mendelian inheritance. But certain traits are governed either by the chloroplast or mitochondrial genes known as extra nuclear inheritance.

(ii) It is a kind of Non-Mendelian inheritance. Since it involves cytoplasmic organelles such as chloroplast that act as inheritance vectors, it is also called Cytoplasmic inheritance.

(iii) It is based on independent, self-replicating extra chromosomal unit called plasmogene located in the chloroplast.

(vii) But in the reciprocal cross the F1 plant differs from each other.

(viii) In each cross, the F1 plant reveals the character of the plant which is used as female plant.

(ix) This inheritance is not through nuclear gene. It is due to the chloroplast gene found in the ovum of the female plant which contributes the cytoplasm during fertilization since the male gamete contribute only the nucleus but not cytoplasm.