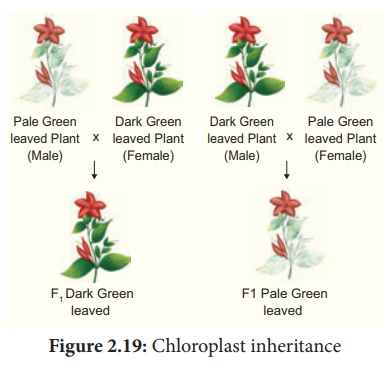 This inheritance is not through nuclear gene. It is due to the chloroplast gene found in the ovum of the female plant which contributes the cytoplasm during fertilization since the male gamete contribute only the nucleus but not cytoplasm.

In this plant there are two types, one with normal cytoplasm (N) which is male fertile and the other one with aberrant cytoplasm (S) which is male sterile. These types also exhibit reciprocal differences as found in Mirabilis jalapa. 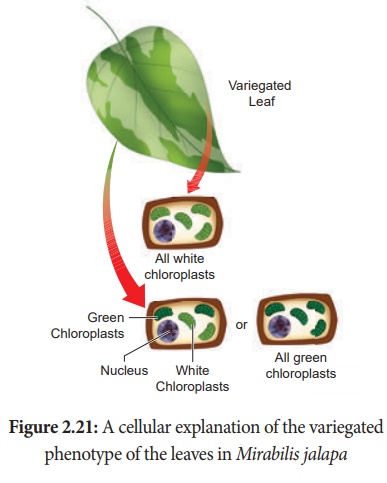 Recently it has been discovered that cytoplasmic genetic male sterility is common in many plant species. This sterility is maintained by the influence of both nuclear and cytoplasmic genes. There are commonly two types of cytoplasm N (normal) and S (sterile). The genes for these are found in mitochondrion. There are also restores of fertility (Rf) genes. Even though these genes are nuclear genes, they are distinct from genetic male sterility genes of other plants. Because the Rf genes do not have any expression of their own, unless the sterile cytoplasm is present. Rf genes are required to restore fertility in S cytoplasm which is responsible for sterility. 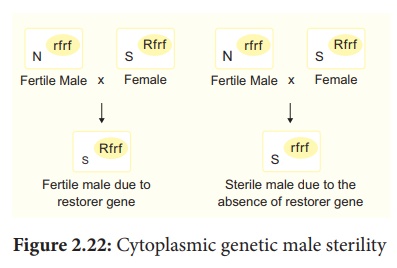 Atavism is a modification of a biological structure whereby an ancestral trait reappears after having been lost through evolutionary changes in the previous generations. Evolutionary traits that have disappeared phenotypically do not necessarily disappear from an organism’s DNA. The gene sequence often remains, but is inactive. Such an unused gene may remain in the genome for many generations. As long as the gene remains intact, a fault in the genetic control suppressing the gene can lead to the reappearance of that character again. Reemergence of sexual reproduction in the flowering plant Hieracium pilosella is the best example for Atavism in plants.