Monohybrid inheritance is the inheritance of a single character i.e. plant height.It involves the inheritance of two alleles of a single gene. When the F1 generation was selfed Mendel noticed that 787 of 1064 F2 plants were tall, while 277 of 1064 were dwarf. The dwarf trait disappeared in the F1 generation only to reappear in the F2 generation. The term genotype is the genetic constitution of an individual. The term phenotype refers to the observable characteristic of an organism. In a genetic cross the genotypes and phenotypes of offspring, resulting from combining gametes during fertilization can be easily understood with the help of a diagram called Punnett’s Square named after a British Geneticist Reginald C.Punnett. It is a graphical representation to calculate the probability of all possible genotypes of offsprings in a genetic cross.The Law of Dominance and the Law of Segregation give suitable explanation to Mendel’s monohybrid cross.

The gene for plant height has two alleles: Tall (T) x Dwarf (t). The phenotypic and genotypic analysis of the crosses has been shown by Checker board method or by Forkline method.

Mendel chose two contrasting traits for each character. So it seemed logical that two distinct factors exist. In F1 the recessive trait and its factors do not disappear and they are hidden or masked only to reappear in ¼ of the F2 generation. He concluded that tall and dwarf alleles of F1 heterozygote segregate randomly into gametes. Mendel got 3:1 ratio in F2 between the dominant and recessive trait. He was the first scientist to use this type of quantitative analysis in a biological experiment. Mendel’s data is concerned with the proportions of offspring.

Mendel’s analytical approach is truly an outstanding scientific achievement. His meticulous work and precisely executed breeding experiments proposed that discrete particulate units of heredity are present and they are transmitted from one generation to the other. Now they are called as genes. Mendel’s experiments were well planned to determine the relationships which govern hereditary traits. This rationale is called an empirical approach. Laws that were arrived from an empirical approach is known as empirical laws.

Test cross is crossing an individual of unknown genotype with a homozygous recessive.

In Mendel’s monohybrid cross all the plants are tall in F1 generation. In F2 tall and dwarf plants were in the ratio of 3:1.Mendel self pollinated dwarf F2 plants and got dwarf plants in F3 and F4 generations. So he concluded that the genotype of dwarf was homozygous (tt). The genotypes of tall plants TT or Tt from F1and F2 cannot be predicted. But how we can tell if a tall plant is homozygous or heterozygous? To determine the genotype of a tall plant Mendel crossed the plants from F2 with the homozygous recessive dwarf plant. This he called a test cross. The progenies of the test cross can be easily analysed to predict the genotype of the plant or the test organism. Thus in a typical test cross an organism (pea plants) showing dominant phenotype (whose genotype is to be determined) is crossed with the recessive parent instead of self crossing. Test cross is used to identify whether an individual is homozygous or heterozygous for dominant character. 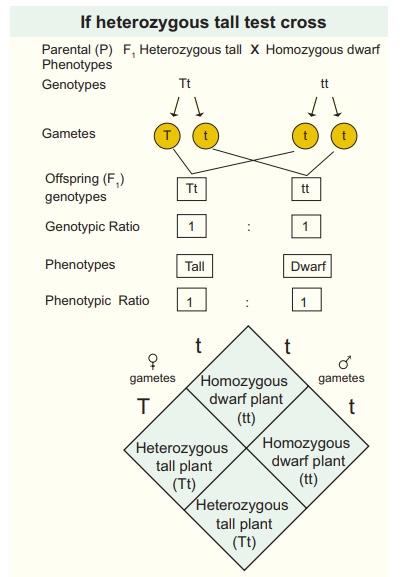 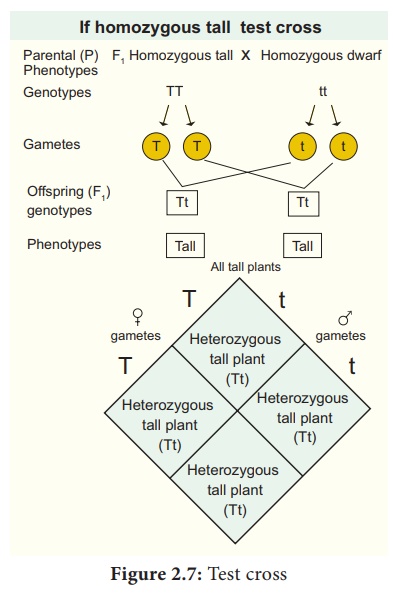 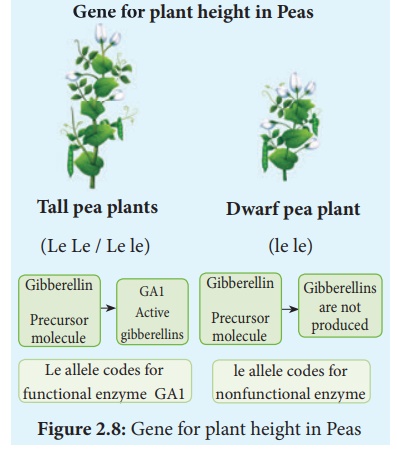 ·         It involves the cross between the F1 offspring with either of the two parents.

·         When the F1offsprings are crossed with the dominant parents all the F2 develop dominant character and no recessive individuals are obtained in the progeny.

·         If the F1 hybrid is crossed with the recessive parent individuals of both the phenotypes appear in equal proportion and this cross is specified as test cross.

·         The recessive back cross helps to identify the heterozygosity of the hybrid.

It is a genetic cross which involves individuals differing in two characters. Dihybrid inheritance is the inheritance of two separate genes each with two alleles.

Law of Independent Assortment – When two pairs of traits are combined in a hybrid, segregation of one pair of characters is independent to the other pair of characters. Genes that are located in different chromosomes assort independently during meiosis. Many possible combinations of factors can occur in the gametes. 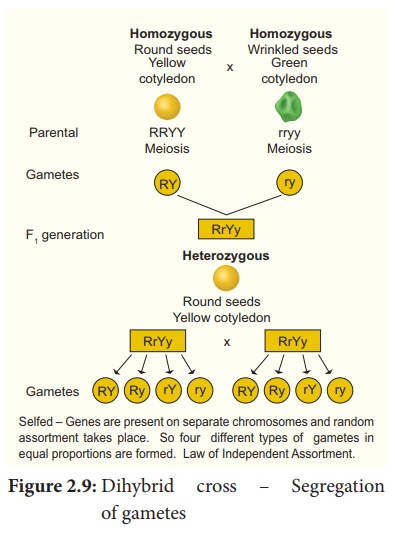 The crossing of two plants differing in two pairs of contrasting traits is called dihybrid cross. In dihybrid cross, two characters (colour and shape) are considered at a time. Mendel considered the seed shape (round and wrinkled) and cotyledon colour (yellow & green) as the two characters. In seed shape round (R) is dominant over wrinkled (r) ; in cotyledon colour yellow (Y) is dominant over green (y). Hence the pure breeding round yellow parent is represented by the genotype RRYY and the pure breeding green wrinkled parent is represented by the genotype rryy. During gamete formation the paired genes of a character assort out independently of the other pair. During the F1 x F1 fertilization each zygote with an equal probability receives one of the four combinations from each parent. The resultant gametes thus will be genetically different and they are of the following four types:

These four types of gametes of F1 dihybrids unite randomly in the process of fertilization and produce sixteen types of individuals in F2 in the ratio of 9:3:3:1 as shown in the figure. Mendel’s 9:3:3:1 dihybrid ratio is an ideal ratio based on the probability including segregation, independent assortment and random fertilization. In sexually reproducing organism plants from the garden peas to human beings, Mendel’s findings laid the foundation for understanding inheritance and revolutionized the field of biology. The dihybrid cross and its result led Mendel to propose a second set of generalisations that we called Mendel's Law of independent assortment.

How does the wrinkled gene make Mendel’s peas wrinkled? Find out the molecular explanation.

The protein called starch branching enzyme (SBEI) is encoded by the wild-type allele of the gene (RR) which is dominant. When the seed matures, this enzyme SBEI catalyzes the formation of highly branched starch molecules. Normal gene (R) has become interrupted by the insertion of extra piece of DNA (0.8 kb) into the gene, resulting in r allele. In the homozygous mutant form of the gene (rr) which is recessive, the activity of the enzyme SBEI is lost resulting in wrinkled peas. The wrinkled seed accumulates more sucrose and high water content. Hence the osmotic pressure inside the seed rises. As a result, the seed absorbs more water and when it matures it loses water as it dries. So it becomes wrinkled at maturation. When the seed has atleast one copy of normal dominant gene heterozygous, the dominant allele helps to synthesize starch, amylopectin an insoluble carbohydrate, with the osmotic balance which minimises the loss of water resulting in smooth structured round seed. 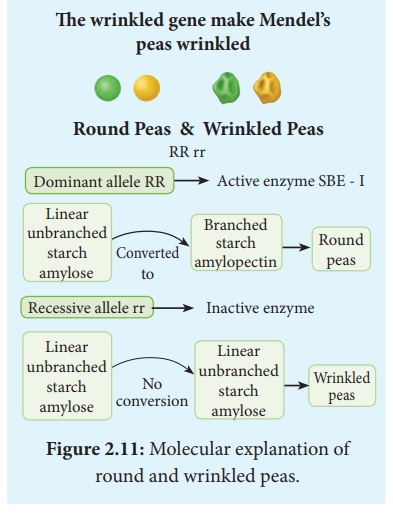 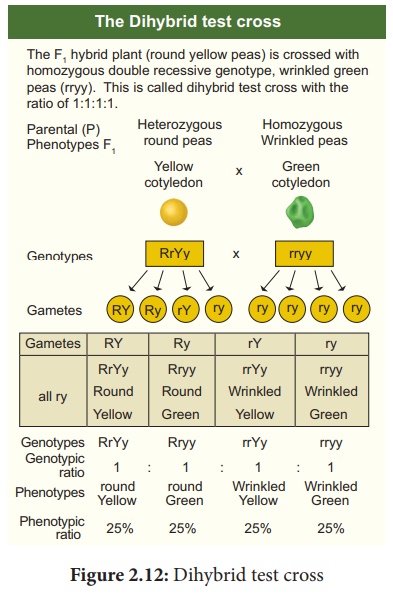 A cross between homozygous parents that differ in three gene pairs (i.e. producing trihybrids) is called trihybrid cross. A self fertilizing trihybrid plant forms 8 different gametes and 64 different zygotes. In this a combination of three single pair crosses operating together. The three contrasting characters of a trihybrid cross are

Apart from monohybrid, dihybrid and trihybrid crosses, there are exceptions to Mendelian principles, i.e. the occurrence of different phenotypic ratios. The more complex patterns of inheritance are the extensions of Mendelian Genetics. There are examples where phenotype of the organism is the result of the interactions among genes.

Gene interaction – A single phenotype is controlled by more than one set of genes, each of which has two or more alleles. This phenomenon is called Gene Interaction. Many characteristics of the organism including structural and chemical which constitute the phenotype are the result of interaction between two or more genes. 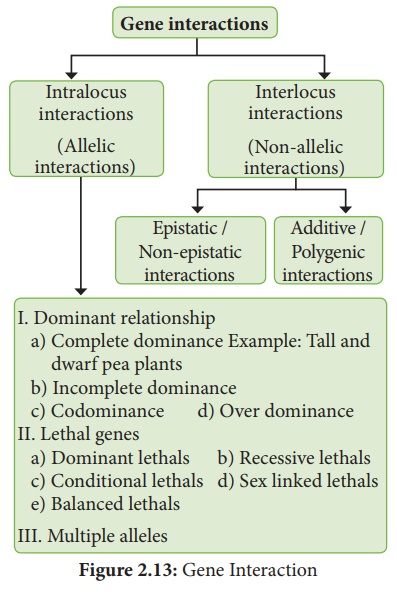