Chemical digestion in the small Intestine and Absorption of Food 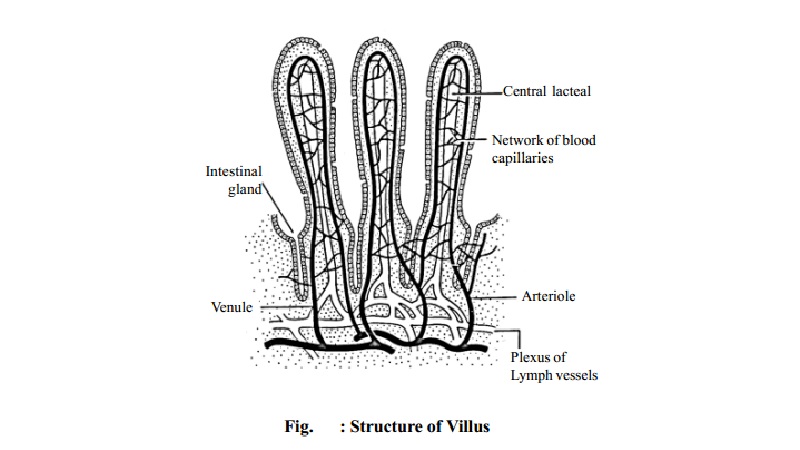 Chemical digestion in the small Intestine

Bile is not primarily a digestive juice because it contains no enzyme but it helps in the digestion of fats. The bile salts emulsifies fats and helps the pancreatic lipase to act and digest it easily. The pancreatic juice contains 3 powerful enzymes. They are:

It also contains three sugar splitting enzymes called lactase, maltase and sucrase converting the respective sugars into simple sugars, mostly glucose. It also has lipase which acts on fats and converts them into fatty acids and glycerol.

The final products of digestion of the carbohydrates is glucose, for the proteins are amino acids and fats are fatty acids, and glycerol.

In the stomach there is little absorption. Water, alcohol, glucose, and simple salts are absorbed to a certain degree. The main absorption occurs in small intestine especially in the lower (ileum) part, the upper part of the small intestine is mainly associated with the process of digestion.

The mucous membrane of small intestine is covered with minute fingerlike projections known as villi. About 50 lakhs of villi are found in small intestine. Each villus contains an arteriole, a venule, a capillary network and a lacteal (lymphatic vessel). Nutrients that diffuse through the epithelial cells which cover the villus are able to pass through the capillary walls and the lacteal and enters the blood.

About 90% of all absorption takes place throughout the length of the small intestine. The other 10% occurs in the stomach and large intestine. Both monosaccharides and amino acids are absorbed by a positive pressure gradient between the intestinal content and the blood as well as by an active process involving enzymatic reactions and transported in the blood stream to the liver via the hepatic portal system. The excess amount of glucose is converted into glycogen and stored in the liver, when need arises glycogen is converted into glucose and is utilized by the body.

Fatty acids and glycerol do not enter the blood stream immediately. They are absorbed by the lacteals. So these lymph ducts are seen as white and milky in appearance after a meal of fat. The mineral salts and water soluble vitamin B Complex and C are absorbed via portal blood.

Functions of the Large Intestine