o  HPV 16 or 18: Genital dysplasia.  Is a necessary but not sufficient condition for cervical cancer

§  E6 binds to p53 (tumour suppressor and accelerates its degradation)

·        Occurs in the transformation zone: junction in the endocervix between squamous cells of the vagina and columnar cells of the uterus. Completes development at age 18 – 20, shifting into the endocervix. Previously in the exocervix and more vulnerable to damage/infection Þ significance of age at first intercourse

·        Affected cells right to surface. If found on screening ® refer for colposcopy. Treated the same but CIN3 more likely to progress than CIN2

·        Invasive cancer: basement membrane has been breached. Can get glandular extension in CIN3 – metaplasia down glands – but still not invasive as the BM is not breached

·        Cervical Dysplasia: grade depends on the proportion of the epithelium occupied by malignant cells

o   Also HPV related, but much less common than cervical squamous carcinoma (which has a higher rate of replication)

·        Currently reported on the Bethesda system which divides dysplasia into LGSIL, HGSIL and ASCUS (Atypical squamous cells of unknown significance – not sure whether they‟re dysplastic or reactive. Some will be CIN3 so still need follow-up)

§  Spatula first, one full turn, and if poor endocervical sample follow with brush (only turn one turn otherwise bleeding ® obscures sample) and use a second slide for the brush.

§  Broom does both well (sample of choice for all age groups) – turn 5 times and wipe both sides once down slide. Thin prep: cells mixed up and rubbish removed ® better reading. Can‟t use wooden spatula.

·        Putting on slide: wipe spatula once, roll brush (scrubbing it around lyses cells). Fix quickly – within one second – as drying causes distortion of cells. Fix either in 95% ethyl alcohol for 20 - 30 minutes or cytofix sprayed from 20 – 30 cms.

·        Biggest cause of ¯ sensitivity is poor sampling. Smears can be unsatisfactory if blood, inflammatory cells or lubricant present. Smears taken 4 – 5 days prior to the next period may show cytolysis (cellular degeneration due to ­ bacilli)

Relationship between screening results and lesions

o  3 yearly screening should be offered to all women aged 20 – 69 years who have been sexually active. Can stop if > 5 years with no sex (this bit not in the guideline)

o  Screening should be yearly for 2 years from 20 (some advocate starting earlier if > 2 years since commencing regular sex – but as cancer in this age group is very uncommon, it‟s not good screening practice. If you think cancer is a possibility, you shouldn‟t use a screening test to diagnose it)

·        Sensitivity of a single smear is 80% for low and high grade lesions (ie not sufficient for diagnosis, only for screening) 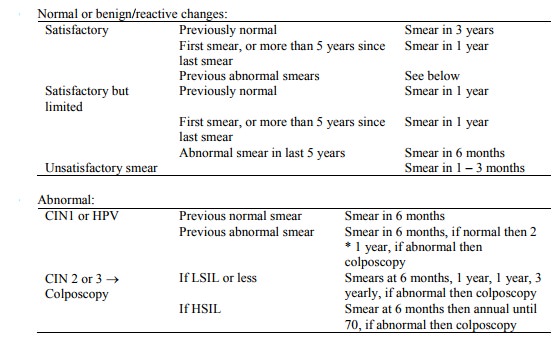 ·        NPV of a normal smear is 80% Þ if abnormal appearing cervix (lesion with raised edge, nodular feel, hard, bleeds when touched) or persistent abnormal bleeding they need a colposcopy not a smear:

o   Interval cancers: minimum time from infection to invasive is ~ 18 months. Normal is ~ 10 to 15 years

·        Much less effective at glandular lesions: clinical suspicion should overrule a „normal‟ smear