Blood vessels, Structure and Working of the Heart 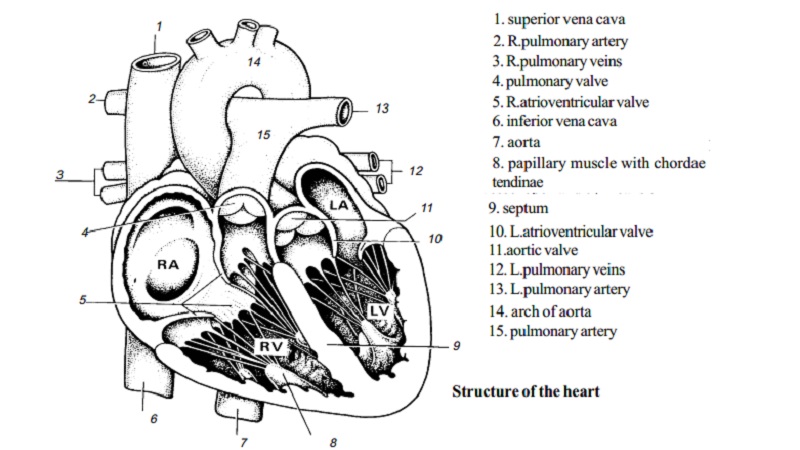 The heart is a cone-shaped, hollow, muscular organ having the base above and the apex below.

Venules and veins carry impure blood towards the heart except the pulmonary veins which carry pure blood.

Capiliaries are very minute blood vessels in which arterioles terminate and venules begin. They form a delicate network of vessels which ramify in most parts of the tissues of the body.

They are composed of three layers, tunica adventitia, tunica media and tunica intima. The outer layer is protective in nature. The inner lining is very smooth and lined by a single layer of flat pavement cells. The middle layer is strong. It holds the vessel open and by means of contraction it exerts steady pressure on the blood. The thick walls of the larger arteries are themselves supplied with blood by a special system of tiny vessels known as the vasa-vasorum.

These are microscopic blood vessels through which materials are exchanged between blood and interstitial fluids. They unite to form venules which inturn form veins to carry blood back to heart. Capillaries branch to form an extensive capillary network throughout the tissue. The network increases the surface area allowing a rapid exchange of large quantities of materials. Capillaries are minute vessels in which the arteries terminate. As the arterioles get smaller and smaller, the three coats gradually disappear until when the fine hair-like capillary vessels are formed. These consist of one layer, the inner endothelial coat of the arteries. The extreme thinness of the vessels is highly suitable for filtration, diffusion, osmosis, etc.

Veins carry blood to heart. Each vein is made up of tunica adventitia, tunica media and tunica intima, similar to that of arteries. But the middle muscular layer is thinner, less firm and elastic than the arteries. At intervals they are thrown out into transverse folds and constitute a sort of incomplete valve. This helps to make the circulation one-way, by allowing blood to flow towards heart but not in opposite direction.

Structure of the Heart

The heart is a cone-shaped, hollow, muscular organ having the base above and the apex below. The apex inclines towards the left

side. The heart is about the size of a closed fist. It is divided by a septum into two sides, right and left. Each side is further subdividedinto two chambers, an upper chamber both on the right and the left side is called an atrium or auricle, and a lower chamber, aventricle.

The auricles and the ventricles of each side communicate with one another by means of the auriculoventricular opening which are guarded by valves on the right side by the tricuspid vaive and on the left the mitral valve. The auriculoventricular valves permit the passage of blood in one direction only i.e. from auricle to ventricle and they prevent the blood flowing backwards from ventricle to auricle. The interior of each ventricular wall is marked by thickened column of muscle. These project as papillae, the papillary muscles, and at the end attached with thin tendinous cords called the chordae tendineae. They have a second attachment to the lower borders of the auriculoventricular valves and prevents the flaps of the valves being forced up into the auricle when the ventricles contract.

The heart is composed by a specialised cardiac muscle, surrounded by a membrane of three layers namely the pericardium-outer covering, the myocardium middle muscular layer and the endocardium - the inner lining.

Working of the heart

The heart is a pump and the events which occur in the heart during the circulation of blood are spoken of as the cardiac cycle. In a normal heart beat the two auricles contract simultaneously while the two ventricles relax and vice versa. The term systole refers to the phase of contraction. Diastole is the phase of relaxation. A cardiac cycle consists of the systole and diastole of both auricles and the ventricles.

The alternate expansion and elastic recoil of an artery with each systole of the left ventricle is called the pulse. Pulse is strongest in the arteries which are closer to the heart. It becomes weaker as it passes over the arterial system and it disappears altogether in the capillaries. The pulse may be felt in any artery that lies near the surface of the body and over a bone or other firm tissues. The radial artery at the wrist is most commonly used.

The pulse rate is the same as the heart rate and averages between 70 and 90 beats per minute in resting state. If the pulse rate is rapid it is termed as tachycardia. If it is slow, bradycardia. Each pulse beat should be of equal strength. Irregularities in strength may indicate a lack of muscle tone in the heart or arteries.

If the sounds are peculiar they are called 'murmurs'. Some murmurs are caused by the noise made by a little blood bubbling back up into an auricle because of improper closure of an auriculoventricular valve. Heart sounds can be easily heard by using stethoscope.