Basic Pharmacology of the Opioid Analgesics

Opium, the source of morphine, is obtained from the poppy, Papaver somniferum and P album.

BASIC PHARMACOLOGY OF THE OPIOID ANALGESICS

Opium, the source of morphine, is obtained from the poppy, Papaver somniferum and P album. After incision, the poppy seedpod exudes a white substance that turns into a brown gum that is crude opium. Opium contains many alkaloids, the principal one being morphine, which is present in a concentration of about 10%. Codeine is synthesized commercially from morphine.

Opioid drugs include full agonists, partial agonists, and antago-nists. Morphine is a full agonist at the l(mu)-opioid receptor, the major analgesic opioid receptor (Table 31–1). In contrast, codeine functions as a partial (or “weak”) μ-receptor agonist. Other opioid receptor subtypes include c(delta) and j(kappa) receptors. Simple substitution of an allyl group on the nitrogen of the full agonist morphine plus addition of a single hydroxyl group results in naloxone, a strong μ-receptor antagonist. The structures of some of these compounds are shown later. Some opioids, eg, nalbuphine, are capable of producing an agonist (or partial agonist) effect at one opioid receptor subtype and an antagonist effect at another. The receptor activating properties and affinities of opioid analgesics can be manipulated by pharmaceuti-cal chemistry; in addition, certain opioid analgesics are modified in the liver, resulting in compounds with greater analgesic action. Chemically, the opioids derived from opium are phenanthrene derivatives and include four or more fused rings, while most of the synthetic opioids are simpler molecules. 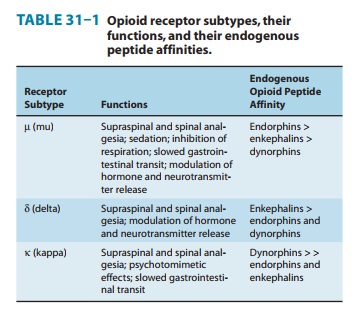 The endogenous opioid peptides are derived from three precursor proteins: prepro-opiomelanocortin (POMC), preproenkephalin (proenkephalin A), and preprodynorphin (proenkephalin B). POMC contains the met-enkephalin sequence, β-endorphin, and several nonopioid peptides, including adrenocorticotropic hormone (ACTH), β-lipotropin, and melanocyte-stimulating hormone. Preproenkephalin contains six copies of met-enkephalin and one copy of leu-enkephalin. Leu- and met-enkephalin have slightly higher affinity for the δ (delta) than for the μ-opioid receptor (Table 31–1). Preprodynorphin yields several active opioid peptides that contain the leu-enkephalin sequence. These are dynorphin A,dynorphin B, andαandβ neoendorphins. The endogenous pep-tides endomorphin-1 and endomorphin-2 also possess many of the properties of opioid peptides, notably analgesia and high-affinity binding to the μ receptor. Endomorphin-1 and -2 selectively activate central and peripheral μ-opioid receptors but much about them remains unknown, including the identity of their preproendomor-phin gene. Both the endogenous opioid precursor molecules and the endomorphins are present at CNS sites that have been implicated in pain modulation. Evidence suggests that they can be released during stressful conditions such as pain or the anticipation of pain and diminish the sensation of noxious stimuli. Whether acupuncture releases endogenous opioid peptides is under investigation.

In contrast to the analgesic role of leu- and met-enkephalin, an analgesic action of dynorphin A—through its binding to κ (kappa)-opioid receptors—remains controversial. Dynorphin A is also found in the dorsal horn of the spinal cord, where it may play a critical role in the sensitization of nociceptive neurotransmission. Increased levels of dynorphin can be found in the dorsal horn aftertissue injury and inflammation. This elevated dynorphin level is proposed to increase pain and induce a state of long-lasting hyper-algesia. The pronociceptive action of dynorphin in the spinal cord appears to be independent of the opioid receptor system but dependent on the activation of the bradykinin receptor. Moreover, dynorphin A can bind and activate the N-methyl-D-aspartate (NMDA)-receptor complex, a site of action that is the focus of intense therapeutic development.

Recently, a novel receptor-ligand system homologous to the opioid peptides has been found. The principal receptor for this system is the G protein-coupled orphanin opioid-receptor-likesubtype 1 (ORL1). Its endogenous ligand has been termednoci-ceptin by one group of investigators andorphanin FQby anothergroup. This ligand-receptor system is currently known as the N/OFQ system. Nociceptin is structurally similar to dynorphinexcept for the absence of an N-terminal tyrosine; it acts only at the ORL1 receptor, now known as NOP. The N/OFQ system is widely expressed in the CNS and periphery, reflecting its equally diverse biology and pharmacology. As a result of experiments using highly selective NOP receptor ligands, the N/OFQ system has been implicated in both pro- and anti-nociceptive activity as well as in the modulation of drug reward, learning, mood, anxiety, and cough processes, and of parkinsonism.