Clinical Use of Opioid Analgesics

Severe, constant pain is usually relieved with opioid analgesics with high intrinsic activity (see Table 31–2), whereas sharp, intermit-tent pain does not appear to be as effectively controlled.

Clinical Use of Opioid Analgesics

Severe, constant pain is usually relieved with opioid analgesics with high intrinsic activity (see Table 31–2), whereas sharp, intermit-tent pain does not appear to be as effectively controlled. 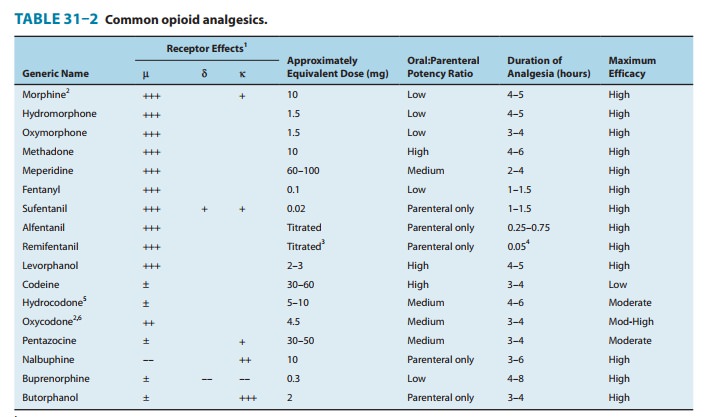 The pain associated with cancer and other terminal illnesses must be treated aggressively and often requires a multidisciplinary approach for effective management. Such conditions may require continuous use of potent opioid analgesics and are associated with some degree of tolerance and dependence. However, this should notbe used as a barrier to providing patients with the best possible care and quality of life. Research in the hospice movement has demon-strated that fixed-interval administration of opioid medication (ie, a regular dose at a scheduled time) is more effective in achieving pain relief than dosing on demand. New dosage forms of opioids that allow slower release of the drug are now available, eg, sus-tained-release forms of morphine (MS Contin) and oxycodone (OxyContin). Their purported advantage is a longer and more stable level of analgesia.

If disturbances of gastrointestinal function prevent the use of oral sustained-release morphine, the fentanyl transdermal system (fentanyl patch) can be used over long periods. Furthermore, buc-cal transmucosal fentanyl can be used for short episodes of break-through pain (see Alternative Routes of Administration). Administration of strong opioids by nasal insufflation has been shown to be efficacious, and nasal preparations are now available in some countries. Approval of such formulations in the USA is grow-ing. In addition, stimulant drugs such as the amphetamines have been shown to enhance the analgesic actions of the opioids and thus may be very useful adjuncts in the patient with chronic pain.

Opioid analgesics are often used during obstetric labor. Because opioids cross the placental barrier and reach the fetus, care must be taken to minimize neonatal depression. If it occurs, immediate injec-tion of the antagonist naloxone will reverse the depression. The phenylpiperidine drugs (eg, meperidine) appear to produce less depression, particularly respiratory depression, in newborn infants than does morphine; this may justify their use in obstetric practice.

The acute, severe pain of renal and biliary colic often requires a strong agonist opioid for adequate relief. However, the drug-induced increase in smooth muscle tone may cause a paradoxical increase in pain secondary to increased spasm. An increase in the dose of opioid is usually successful in providing adequate analgesia.

The relief produced by intravenous morphine in dyspnea from pulmonary edema associated with left ventricular heart failure is remarkable. Proposed mechanisms include reduced anxiety (per-ception of shortness of breath) and reduced cardiac preload(reduced venous tone) and afterload (decreased peripheral resis-tance). However, if respiratory depression is a problem, furosemide may be preferred for the treatment of pulmonary edema. On the other hand, morphine can be particularly useful when treating painful myocardial ischemia with pulmonary edema.

Suppression of cough can be obtained at doses lower than those needed for analgesia. However, in recent years the use of opioid analgesics to allay cough has diminished largely because a number of effective synthetic compounds have been developed that are neither analgesic nor addictive. These agents are discussed below.

Diarrhea from almost any cause can be controlled with the opioid analgesics, but if diarrhea is associated with infection such use must not substitute for appropriate chemotherapy. Crude opium preparations (eg, paregoric) were used in the past to control diar-rhea, but now synthetic surrogates with more selective gastrointes-tinal effects and few or no CNS effects, eg, diphenoxylate or loperamide, are used. Several preparations are available specifically for this purpose .

Although all opioid agonists have some propensity to reduce shiv-ering, meperidine is reported to have the most pronounced anti-shivering properties. Meperidine apparently blocks shivering mainly through an action on subtypes of the α2 adrenoceptor.

The opioids are frequently used as premedicant drugs before anes-thesia and surgery because of their sedative, anxiolytic, and analge-sic properties. They are also used intraoperatively both as adjuncts to other anesthetic agents and, in high doses (eg, 0.02–0.075 mg/ kg of fentanyl), as a primary component of the anesthetic regimen . Opioids are most commonly used in cardiovascu-lar surgery and other types of high-risk surgery in which a primary goal is to minimize cardiovascular depression. In such situations, mechanical respiratory assistance must be provided.

Because of their direct action on the superficial neurons of the spinal cord dorsal horn, opioids can also be used as regional anal-gesics by administration into the epidural or subarachnoid spaces of the spinal column. A number of studies have demonstrated that long-lasting analgesia with minimal adverse effects can be achieved by epidural administration of 3–5 mg of morphine, followed by slow infusion through a catheter placed in the epidural space. It was initially assumed that the epidural application of opioids might selectively produce analgesia without impairment of motor, autonomic, or sensory functions other than pain. However, respi-ratory depression can occur after the drug is injected into the epidural space and may require reversal with naloxone. Effects such as pruritus and nausea and vomiting are common after epi-dural and subarachnoid administration of opioids and may also be reversed with naloxone if necessary. Currently, the epidural route is favored over subarachnoid administration because adverse effects are less common and robust outcome studies have shown a significant reduction in perioperative mortality and morbidity with the use of thoracic epidural analgesia. The use of low doses of local anesthetics in combination with fentanyl infused through a thoracic epidural catheter has become an accepted method of pain control in patients recovering from thoracic and major upper abdominal surgery. In rare cases, chronic pain management spe-cialists may elect to surgically implant a programmable infusion pump connected to a spinal catheter for continuous infusion of opioids or other analgesic compounds.

Rectal suppositories of morphine and hydromorphone have beenused when oral and parenteral routes are undesirable. The transder-mal patch provides stable blood levels of drug and better pain con-trol while avoiding the need for repeated parenteral injections. Fentanyl has been the most successful opioid in transdermal applica-tion and is indicated for the management of persistent unremitting pain. Because of the complication of fentanyl-induced respiratory depression, the Food and Drug Administration (FDA) recommends that introduction of a transdermal fentanyl patch (25 mcg/h) be reserved for patients with an established oral morphine require-ment of at least 60 mg/d for 1 week or more. Extreme caution must be exercised in any patient initiating therapy or undergoing a dose increase because the peak effects may not be realized until 24–48 hours after patch application. The intranasal route avoids repeated parenteral drug injections and the first-pass metabolism of orally administered drugs. Butorphanol is the only opioid cur-rently available in the USA in a nasal formulation, but more are expected. Another alternative to parenteral administration is the buccal transmucosal route, which uses a fentanyl citrate lozengeor a “lollipop” mounted on a stick.

Another type of pain control called patient-controlled analgesia(PCA) is now in widespread use for the management of break-through pain. With PCA, the patient controls a parenteral (usually intravenous) infusion device by pressing a button to deliver a pre-programmed dose of the desired opioid analgesic. Claims of better pain control using less opioid are supported by well-designed clinical trials, making this approach very useful in postoperative pain control. However, health care personnel must be very familiarwith the use of PCAs to avoid overdosage secondary to misuse or improper programming. There is a proven risk of PCA-associated respiratory depression and hypoxia that requires careful monitoring of vital signs and sedation level, and provision of supplemental oxygen. This risk is increased if patients are concurrently prescribed medications with sedative properties such as benzodiazepines.