The opioid analgesics are among the most effective drugs available for the suppression of cough.

The opioid analgesics are among the most effective drugs available for the suppression of cough. This effect is often achieved at doses below those necessary to produce analgesia. The receptors involved in the antitussive effect appear to differ from those associated with the other actions of opioids. For example, the antitussive effect is also produced by stereoisomers of opioid molecules that are devoid of analgesic effects and addiction liability .

The physiologic mechanism of cough is complex, and little is known about the specific mechanism of action of the opioid anti-tussive drugs. It appears likely that both central and peripheral effects play a role.

The opioid derivatives most commonly used as antitussives are dextromethorphan, codeine, levopropoxyphene, and noscap-ine (levopropoxyphene and noscapine are not available in theUSA). They should be used with caution in patients taking mono-amine oxidase inhibitors (see Table 31–5). Antitussive prepara-tions usually also contain expectorants to thin and liquefy respiratory secretions. Importantly, due to increasing reports of death in young children taking dextromethorphan in formula-tions of over-the-counter “cold/cough” medications, its use in children less than 6 years of age has been banned by the FDA. Moreover, because of variations in the metabolism of codeine, its use for any purpose in young children is being reconsidered. 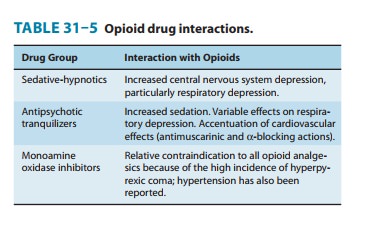 Dextromethorphan is the dextrorotatory stereoisomer of a methylated derivative of levorphanol. It is purported to be free of addictive properties and produces less constipation than codeine. The usual antitussive dose is 15–30 mg three or four times daily. Itisavailableinmanyover-the-counterproducts.Dextromethorphan has also been found to enhance the analgesic action of morphine and presumably other μ-receptor agonists. However, abuse of its purified (powdered) form has been reported to lead to serious adverse events including death.

Codeine, as noted, has a useful antitussive action at doses lower than those required for analgesia. Thus, 15 mg is usually sufficient to relieve cough.

Levopropoxyphene is the stereoisomer of the weak opioid ago-nist dextropropoxyphene. It is devoid of opioid effects, although sedation has been described as a side effect. The usual antitussive dose is 50–100 mg every 4 hours.