Like histamine, serotonin is widely distributed in nature, being found in plant and animal tissues, venoms, and stings.

Like histamine, serotonin is widely distributed in nature, being found in plant and animal tissues, venoms, and stings. It is synthesized in biologic systems from the amino acid L-tryptophan by hydroxylation of the indole ring followed by decarboxylation of the amino acid (Figure 16–2). Hydroxylation at C5 by tryptophan hydroxylase-1 is the rate-limiting step and can be blocked by p-chlorophenylalanine (PCPA; fenclonine) and by p-chloroamphetamine. These agents have been used experimentally to reduce serotonin synthesis in carcinoid syndrome but are too toxic for general clinical use. 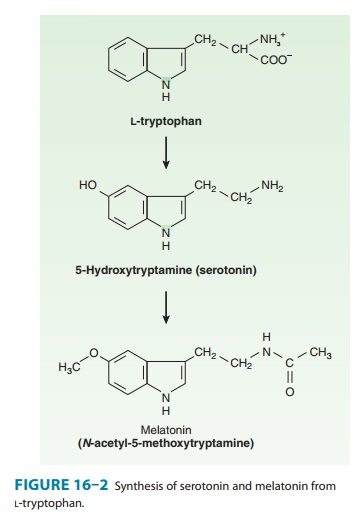 After synthesis, the free amine is stored or is rapidly inacti-vated, usually by oxidation by monoamine oxidase (MAO). In the pineal gland, serotonin serves as a precursor of melatonin, a mel-anocyte-stimulating hormone. In mammals (including humans), over 90% of the serotonin in the body is found in enterochrom-affin cells in the gastrointestinal tract. In the blood, serotonin is found in platelets, which are able to concentrate the amine by means of an active serotonin transporter mechanism (SERT) similar to that in the membrane of serotonergic nerve endings. Once transported into the platelet or nerve ending, 5-HT is con-centrated in vesicles by a vesicle-associated transporter (VAT) that is blocked by reserpine. Serotonin is also found in the raphe nuclei of the brainstem, which contain cell bodies of serotonergic neurons that synthesize, store, and release serotonin as a transmit-ter. Stored serotonin can be depleted by reserpine in much the same manner as this drug depletes catecholamines from vesicles in adrenergic nerves and the adrenal medulla .

Brain serotonergic neurons are involved in numerous diffuse functions such as mood, sleep, appetite, and temperature regula-tion, as well as the perception of pain, the regulation of blood pressure, and vomiting . Serotonin also appears to be involved in clinical conditions such as depression, anxiety, and migraine. Serotonergic neurons are also found in the enteric ner-vous system of the gastrointestinal tract and around blood vessels. In rodents (but not in humans), serotonin is found in mast cells.

The function of serotonin in enterochromaffin cells is not fully understood. These cells synthesize serotonin, store the amine in a complex with adenosine triphosphate (ATP) and other substances in granules, and release serotonin in response to mechanical and neuronal stimuli. This serotonin interacts in a paracrine fashion with several different 5-HT receptors in the gut. Some of the released serotonin diffuses into blood vessels and is taken up and stored in platelets.

Serotonin is metabolized by MAO, and the intermediate product, 5-hydroxyindoleacetaldehyde, is further oxidized by aldehyde dehydrogenase to 5-hydroxyindoleacetic acid (5-HIAA). In humans consuming a normal diet, the excretion of 5-HIAA ismeasure of serotonin synthesis. Therefore, the 24-hour excre-tion of 5-HIAA can be used as a diagnostic test for tumors that synthesize excessive quantities of serotonin, especially carcinoidtumor. A few foods (eg, bananas) contain large amounts of sero-tonin or its precursors and must be prohibited during such diag-nostic tests.

A. Mechanisms of Action

Serotonin exerts many actions and, like histamine, displays many species differences, making generalizations difficult. The actions of serotonin are mediated through a remarkably large number of cell membrane receptors. The serotonin receptors that have been char-acterized thus far are listed in Table 16–3. Seven families of 5-HT-receptor subtypes (those given numeric subscripts 1 through 7) have been identified, six involving G protein-coupled receptors of the usual 7-transmembrane serpentine type and one a ligand-gated ion channel. The latter (5-HT3) receptor is a member of the nicotinic/GABAA family of Na+/K+ channel proteins. 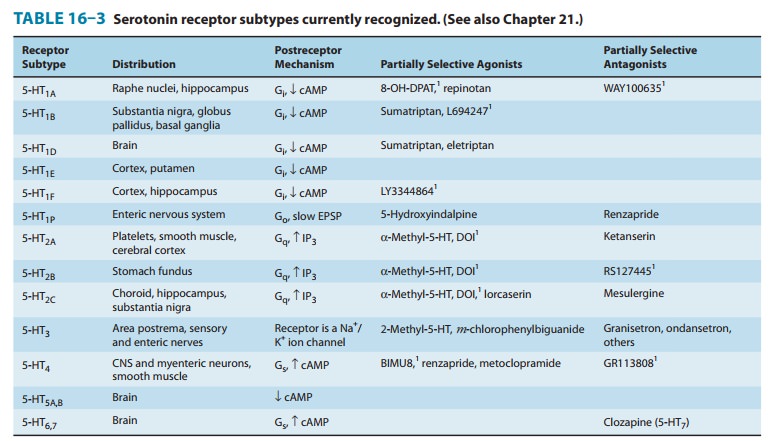 B. Tissue and Organ System Effects

1. Nervous system—Serotonin is present in a variety of sitesin the brain. Its role as a neurotransmitter and its relation to the actions of drugs acting in the central nervous system. Serotonin is also a precursor of melatonin in the pineal gland (Figure 16–2; see Topic: Melatonin Pharmacology). Repinotan, a 5-HT1A agonist currently in clinical trials, appears to have some antinociceptive action at higher doses while reversing opioid-induced respiratory depression. 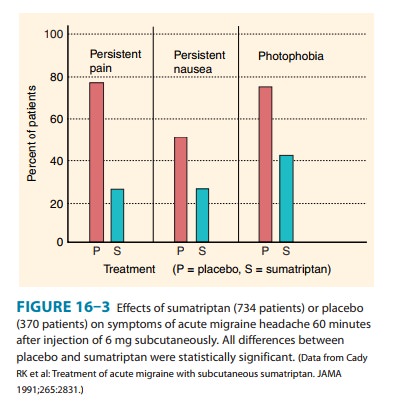 5-HT3 receptors in the gastrointestinal tract and in the vomit-ing center of the medulla participate in the vomiting reflex . They are particularly important in vomiting caused by chemical triggers such as cancer chemotherapy drugs. 5-HT1P and 5-HT4 receptors also play important roles in enteric nervous system function.

Like histamine, serotonin is a potent stimulant of pain and itch sensory nerve endings and is responsible for some of the symptoms caused by insect and plant stings. In addition, serotonin is a pow-erful activator of chemosensitive endings located in the coronary vascular bed. Activation of 5-HT3 receptors on these afferent vagal nerve endings is associated with the chemoreceptor reflex (also known as the Bezold-Jarisch reflex). The reflex response consists of marked bradycardia and hypotension, and its physiologic role is uncertain. The bradycardia is mediated by vagal outflow to the heart and can be blocked by atropine. The hypotension is a con-sequence of the decrease in cardiac output that results from brady-cardia. A variety of other agents can activate the chemoreceptor reflex. These include nicotinic cholinoceptor agonists and some cardiac glycosides, eg, ouabain.

2. Respiratory system—Serotonin has a small direct stimulant effect on bronchiolar smooth muscle in normal humans, probably via 5-HT2A receptors. It also appears to facilitate acetylcholine release from bronchial vagal nerve endings. In patients with carci-noid syndrome, episodes of bronchoconstriction occur in response to elevated levels of the amine or peptides released from the tumor. Serotonin may also cause hyperventilation as a result of the chemoreceptor reflex or stimulation of bronchial sensory nerve endings.

3. Cardiovascular system—Serotonin directly causes the con-traction of vascular smooth muscle, mainly through 5-HT2 receptors. In humans, serotonin is a powerful vasoconstrictor except in skeletal muscle and the heart, where it dilates blood vessels. At least part of this 5-HT-induced vasodilation requires the pres-ence of vascular endothelial cells. When the endothelium is damaged, coronary vessels are constricted by 5-HT. As noted previously, serotonin can also elicit reflex bradycardia by activation of 5-HT3 receptors on chemoreceptor nerve endings. A triphasic blood pres-sure response is often seen following injection of serotonin in experimental animals. Initially, there is a decrease in heart rate, cardiac output, and blood pressure caused by the chemoreceptor response. After this decrease, blood pressure increases as a result of vasoconstriction. The third phase is again a decrease in blood pres-sure attributed to vasodilation in vessels supplying skeletal muscle. Pulmonary and renal vessels seem especially sensitive to the vaso-constrictor action of serotonin.

Studies in knockout mice suggest that 5-HT, acting on 5-HT1A, 5-HT2, and 5-HT 4 receptors, is needed for normal car-diac development in the fetus. On the other hand, chronic expo-sure of adults to 5-HT2B agonists is associated with valvulopathy and adult mice lacking the 5-HT2B receptor gene are protected from cardiac hypertrophy. Preliminary studies suggest that 5-HT2B antagonists can prevent development of pulmonary hypertension in animal models.

Serotonin also constricts veins, and venoconstriction with increased capillary filling appears to be responsible for the flush that is observed after serotonin administration or release from a carcinoid tumor. Serotonin has small direct positive chronotropic and inotropic effects on the heart, which are probably of no clinical significance. However, prolonged elevation of the blood level of serotonin (which occurs in carcinoid syndrome) is associated with pathologic alterations in the endocardium (subendocardial fibro-plasia), which may result in valvular or electrical malfunction.

Serotonin causes blood platelets to aggregate by activating 5-HT2 receptors. This response, in contrast to aggregation induced during normal clot formation, is not accompanied by the release of serotonin stored in the platelets. The physiologic role of this effect is unclear.

4. Gastrointestinal tract—Serotonin is a powerful stimulantof gastrointestinal smooth muscle, increasing tone and facilitating peristalsis. This action is caused by the direct action of serotonin on 5-HT2 smooth muscle receptors plus a stimulating action on ganglion cells located in the enteric nervous system . 5-HT1A and 5-HT7 receptors may also be involved in this complex action. Activation of 5-HT4 receptors in the enteric nervous sys-tem causes increased acetylcholine release and thereby mediates a motility-enhancing or “prokinetic” effect of selective serotonin agonists such as cisapride. These agents are useful in several gastro-intestinal disorders . Overproduction of serotonin (and other substances) in carcinoid tumor is associated with severe diarrhea. Serotonin has little effect on gastrointestinal secretions, and what effects it has are generally inhibitory.

Studies in animal models of glaucoma indicate that 5-HT2A agonists reduce intraocular pressure. This action can be blocked by ketanserin and similar 5-HT2 antagonists.