The H1 antagonists are conveniently divided into first-generation and second-generation agents. 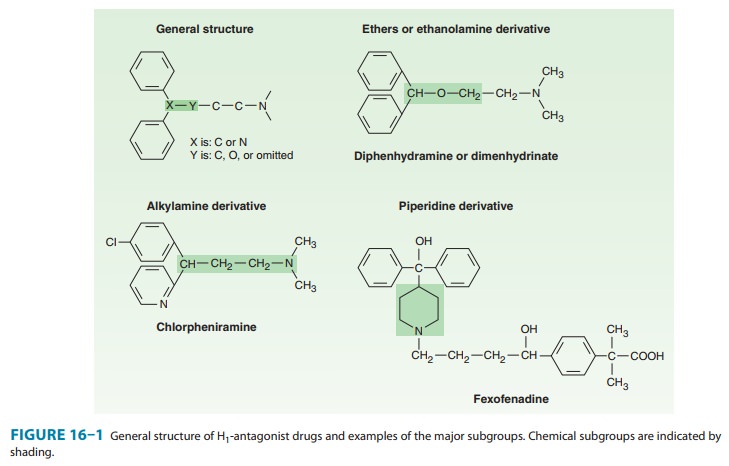 These agents are rapidly absorbed after oral administration, with peak blood concentrations occurring in 1–2 hours. They are widely distributed throughout the body, and the first-generation drugs enter the central nervous system readily. Some of them are exten-sively metabolized, primarily by microsomal systems in the liver. Several of the second-generation agents are metabolized by the CYP3A4 system and thus are subject to important interactions when other drugs (such as ketoconazole) inhibit this subtype of P450 enzymes. Most of the drugs have an effective duration of action of 4–6 hours following a single dose, but meclizine and sev-eral second-generation agents are longer-acting, with a duration of action of 12–24 hours. The newer agents are considerably less lipid-soluble than the first-generation drugs and are substrates of the P-glycoprotein transporter in the blood-brain barrier; as a result they enter the central nervous system with difficulty or not at all. Many H1 antagonists have active metabolites. The active metabo-lites of hydroxyzine, terfenadine, and loratadine are available as drugs (cetirizine, fexofenadine, and desloratadine, respectively). 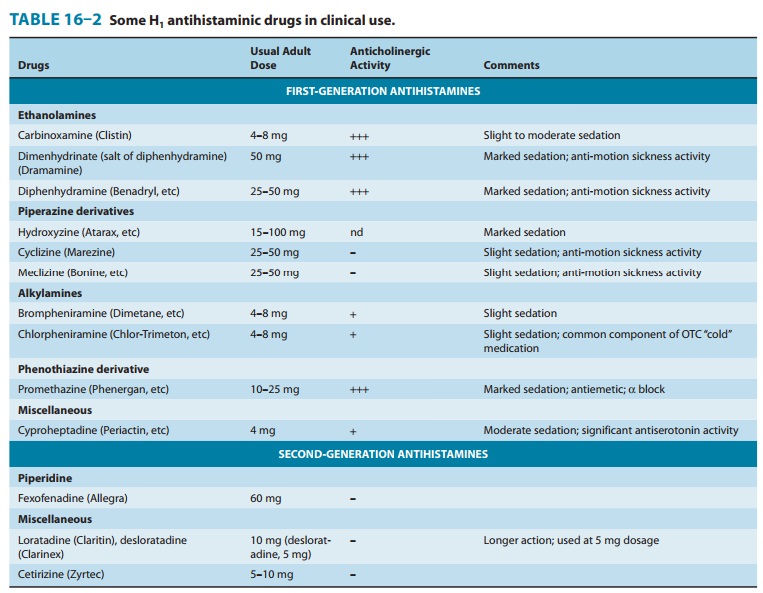 Both neutral H1 antagonists and inverse H1 agonists reduce or block the actions of histamine by reversible competitive binding to the H1 receptor.

Several have been clearly shown to be inverse agonists, and it is possible that all act by this mechanism. They have negligible potency at the H2 receptor and little at the H3 receptor. For example, histamine-induced contraction of bron-chiolar or gastrointestinal smooth muscle can be completely blocked by these agents, but the effects on gastric acid secretion and the heart are unmodified.

The first-generation H1-receptor antagonists have many actions in addition to blockade of the actions of histamine. The large number of these actions probably results from the similarity of the general structure (Figure 16–1) to the structure of drugs that have effects at muscarinic cholinoceptor, α adrenoceptor, serotonin, and local anesthetic receptor sites. Some of these actions are of therapeutic value and some are undesirable.

1. Sedation—A common effect of first-generation H1antago-nists is sedation, but the intensity of this effect varies among chemi-cal subgroups (Table 16–2) and among patients as well. The effect is sufficiently prominent with some agents to make them useful as “sleep aids”  and unsuitable for daytime use. The effect resembles that of some antimuscarinic drugs and is considered very different from the disinhibited sedation produced by sedative-hypnotic drugs. Compulsive use has not been reported. At ordinary dosages, children occasionally (and adults rarely) manifest excitation rather than sedation. At very high toxic dose levels, marked stimulation, agitation, and even convulsions may precede coma. Second-generation H1 antagonists have little or no sedative or stimulant actions. These drugs (or their active metabolites) also have far fewer autonomic effects than the first-generation antihistamines. Antinausea and antiemetic actions—Several first-generation H1 antagonists have significant activity in preventing motion sickness (Table 16–2). They are less effective against an episode of motion sickness already present. Certain H1 antagonists, notably doxylamine (in Bendectin), were used widely in the past in the treatment of nausea and vomiting of pregnancy.

2. Antiparkinsonism effects—Some of the H1antagonists,especially diphenhydramine, have significant acute suppressant effects on the extrapyramidal symptoms associated with certain antipsychotic drugs. This drug is given parenterally for acute dys-tonic reactions to antipsychotics.

3. Anticholinoceptor actions—Many first-generation agents,especially those of the ethanolamine and ethylenediamine sub-groups, have significant atropine-like effects on peripheral musca-rinic receptors. This action may be responsible for some of the (uncertain) benefits reported for nonallergic rhinorrhea but may also cause urinary retention and blurred vision.

5. Adrenoceptor-blocking actions—Alpha-receptor block-ing effects can be demonstrated for many H1 antagonists, espe-cially those in the phenothiazine subgroup, eg, promethazine. This action may cause orthostatic hypotension in susceptible indi-viduals. Beta-receptor blockade is not observed.

6. Serotonin-blocking action—Strong blocking effects at sero-tonin receptors have been demonstrated for some first-generation H1 antagonists, notably cyproheptadine. This drug is promoted as an antiserotonin agent and is discussed with that drug group. Nevertheless, its structure resembles that of the phenothiazine antihistamines, and it is a potent H1-blocking agent.

8. Other actions—Certain H1antagonists, eg, cetirizine, inhibitmast cell release of histamine and some other mediators of inflam-mation. This action is not due to H1-receptor blockade and may reflect an H4-receptor effect . The mechanism is not fully understood but could play a role in the beneficial effects of these drugs in the treatment of allergies such as rhinitis. A fewH 1 antagonists (eg, terfenadine, acrivastine) have been shown to inhibit the P-glycoprotein transporter found in cancer cells, the epithelium of the gut, and the capillaries of the brain. The signifi-cance of this effect is not known.