Two major families of compounds that incorporate the tetracyclic ergoline nucleus may be identified; the amine alkaloids and the peptide alkaloids

Two major families of compounds that incorporate the tetracyclic ergoline nucleus may be identified; the amine alkaloids and thepeptide alkaloids (Table 16–6). Drugs of therapeutic and toxicologic importance are found in both groups. 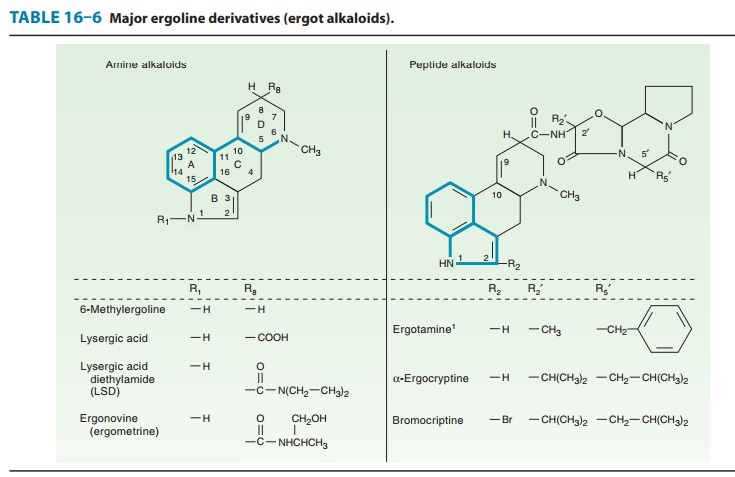 The ergot alkaloids are variably absorbed from the gastrointestinal tract. The oral dose of ergotamine is about 10 times larger than the intramuscular dose, but the speed of absorption and peak blood levels after oral administration can be improved by admin-istration with caffeine . The amine alkaloids are also absorbed from the rectum and the buccal cavity and after admin-istration by aerosol inhaler. Absorption after intramuscular injection is slow but usually reliable. Semisynthetic analogs such as bromocriptine and cabergoline are well absorbed from the gastrointestinal tract.

The ergot alkaloids are extensively metabolized in the body. The primary metabolites are hydroxylated in the A ring, and pep-tide alkaloids are also modified in the peptide moiety.

The ergot alkaloids act on several types of receptors. As shown by the color outlines in Table 16–6, the nuclei of both catecholamines (phenylethylamine, left panel ) and 5-HT (indole, right panel ) can be discerned in the ergoline nucleus. Their effects include agonist, partial agonist, and antagonist actions at α adrenoceptors and serotonin receptors (especially 5-HT1A and 5-HT1D; less for 5-HT2 and 5-HT3); and agonist or partial agonist actions at central ner-vous system dopamine receptors (Table 16–7). Furthermore, some members of the ergot family have a high affinity for presynaptic receptors, whereas others are more selective for postjunctional receptors. There is a powerful stimulant effect on the uterus that seems to be most closely associated with agonist or partial agonist effects at 5-HT2 receptors. Structural variations increase the selec-tivity of certain members of the family for specific receptor types.

1. Central nervous system—As indicated by traditionaldescriptions of ergotism, certain of the naturally occurring alka-loids are powerful hallucinogens. Lysergic acid diethylamide (LSD; “acid”) is a synthetic ergot compound that clearly demon- strates this action. The drug has been used in the laboratory as a potent peripheral 5-HT2antagonist, but good evidence suggests that its behavioral effects are mediated by agonist effects at pre-junctional or postjunctional 5-HT2 receptors in the central ner-vous system. In spite of extensive research, no clinical value has been discovered for LSD’s dramatic central nervous system effects.

Abuse of this drug has waxed and waned but is still widespread.

Dopamine receptors in the central nervous system play impor-tant roles in extrapyramidal motor control and the regulation of pituitary prolactin release. The actions of the peptide ergoline bromocriptine on the extrapyramidal system are discussed. Of all the currently available ergot derivatives, bro-mocriptine, cabergoline, and pergolide have the highest selectiv-ity for the pituitary dopamine receptors. These drugs directly suppress prolactin secretion from pituitary cells by activating regu-latory dopamine receptors . They compete for binding to these sites with dopamine itself and with other dop-amine agonists such as apomorphine. They bind with high affinity and dissociate slowly.

2. Vascular smooth muscle—The action of ergot alkaloids onvascular smooth muscle is drug, species, and vessel dependent, so few generalizations are possible. In humans, ergotamine and simi-lar compounds constrict most vessels in nanomolar concentrations (Figure 16–4). The vasospasm is prolonged. This response is par-tially blocked by conventional α-blocking agents. However, ergot-amine’s effect is also associated with “epinephrine reversal”  and with blockade of the response to other α agonists. This dual effect reflects the drug’s partial agonist action (Table 16–7). Because ergotamine dissociates very slowly from the α receptor, it produces very long-lasting agonist and antagonist effects at this receptor. There is little or no effect at β adrenoceptors.

Although much of the vasoconstriction elicited by ergot alkaloids can be ascribed to partial agonist effects at α adrenoceptors, some may be the result of effects at 5-HT receptors. Ergotamine, ergonovine, and methysergide all have partial agonist effects at 5-HT2 vascular receptors. The remarkably specific antimigraine action of the ergot derivatives was originally thought to be related to their actions on vascular serotonin receptors. Current hypotheses, however, emphasize their action on prejunctional neuronal 5-HT receptors.

After overdosage with ergotamine and similar agents, vasos-pasm is severe and prolonged (see Toxicity, below). This vasospasm is not easily reversed by α antagonists, serotonin antagonists, or combinations of both.

Ergotamine is typical of the ergot alkaloids that have a strong vasoconstrictor spectrum of action. The hydrogenation of ergot alkaloids at the 9 and 10 positions (Table 16–6) yields dihydro derivatives that have reduced serotonin partial agonist and vasocon-strictor effects and increased selective α-receptor–blocking actions.

3. Uterine smooth muscle—The stimulant action of ergotalkaloids on the uterus, as on vascular smooth muscle, appears to combine α agonist, serotonin agonist, and other effects. Furthermore, the sensitivity of the uterus to the stimulant effects of ergot increases dramatically during pregnancy, perhaps because of increasing dominance of α1 receptors as pregnancy progresses. As a result, the uterus at term is more sensitive to ergot than earlier in pregnancy and far more sensitive than the nonpregnant organ.

In very small doses, ergot preparations can evoke rhythmic contraction and relaxation of the uterus. At higher concentrations, these drugs induce powerful and prolonged contracture. Ergonovine is more selective than other ergot alkaloids in affecting the uterus and is the agent of choice in obstetric applications of the ergot drugs although oxytocin, the peptide hormone, is pre-ferred in most cases.

4. Other smooth muscle organs—In most patients, the ergotalkaloids have little or no significant effect on bronchiolar or uri-nary smooth muscle. The gastrointestinal tract, on the other hand, is quite sensitive. Nausea, vomiting, and diarrhea may be induced even by low doses in some patients. The effect is consistent with action on the central nervous system emetic center and on gastro-intestinal serotonin receptors.