• The optic nerves and the retinal blood vessels enter the eye slightly below the posterior pole which is devoid of photo receptors hence this region is called blind spot.

16. Sam’s optometrist tells him that his intraocular pressure is high. What is this condition called and which fluid does it involve?

• The increase in the intraocular pressure leads to the disease called Glaucoma.

• Any block in the canal of Schlemm increases the intraocular pressure of aqueous humor and leads to 'Glaucoma' where the optic nerve and the retina are compressed due to pressure.

• The increase in the intraocular pressure leads to the disease called Glaucoma.

• Any block in the canal of Schlemm increases the intraocular pressure of aqueous humor and leads to 'Glaucoma' where the optic nerve and the retina are compressed due to pressure.

18. Pleasant smell of food urged Ravi to rush into the kitchen. Name the parts of the brain involved in the identification of food and emotional responses to odour.

• The cornea is the only tissue in the body that can be transplanted from one person to another with little or no possibility of rejection. This is because cornea does not have blood vessels.

20. At the end of repolarization, the nerve membrane gets hyperpolarized. Why?

• If repolarization becomes more negative than the resting potential - 70mV to about - 90mV it is called hyperpolarization.

21. The choroid plexus secretes cerebrospinal fluid. List the function of it.

• CSF provides buoyancy to CNS structures, CSF acts as a shock absorber for the brain and spinal cord.

• It nourishes the brain cells by transporting constant supply of food and oxygen.

• It carries harmful metabolic wastes from the brain to the blood

• Maintains a constant pressure inside the cranial vessels.

22. What is the ANS controlling centre? Name the parts that are supplied by the ANS.

The autonomic neural system is auto functioning and self governed. It is a part of peripheral neural system that cardiac muscle. This system controls and coordinates the involuntary activities of various organs. ANS controlling centre is in the hypothalamus.

The components of ANS:-

The cell body is in the brain or spinal cord. Its myelinated axon exits the CNS as part of cranial or spinal nerve and ends in an autonomic ganglion.

23. Why the limbic system is called the emotional brain? Name the parts of it.

The limbic system is called "emotional brain because it plays a primary role in the regulation of pleasure pain anger fear sexual feeling and affection.

The main components of limbic system are olfactory bulbs

24. Classify receptors based on type of stimuli.

25. Name the first five cranial nerves, their nature and their functions.

1. Helps in seeing in dim light

4. There are 120 million rods are seen the retina

5. Rods are seen richly over the surface of the foveal region.

3. The protein opsin and retinol combines to form photopsin.

4. 6-7 million cone cells are seen on the retina

5. Cones are richly present on the foveal region.

26. The sense of taste is considered to be the most pleasurable of all senses.

Describe the structure of the receptor involved with a diagram.

• The sense of taste is considered to be the most pleasurable of all senses.

• The tongue is provided with many small projections called papillae.

• Taste buds are located mainly on the papillae.

• Taste buds are flask shaped. There are two major types.

• Long micro villi called gustatory hairs project from the tip of the gustatory cells and extends through a taste pore to the surface of the epithelium. 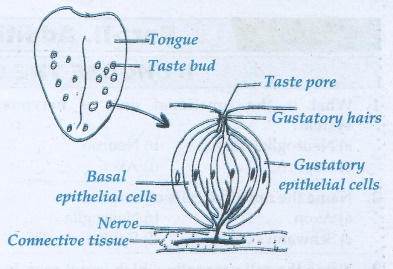 • Gustatory hairs are the sensitive portion of the gustatory cells and they have sensory dendrites which send the signal to the brain.

• The basal cells that act as stem cells divide and differentiate into new gustatory cells. 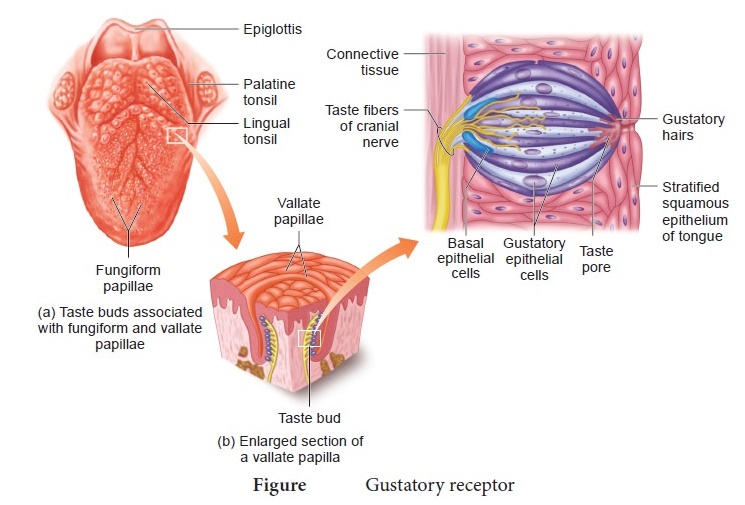 27. Describe the structures of olfactory receptors? 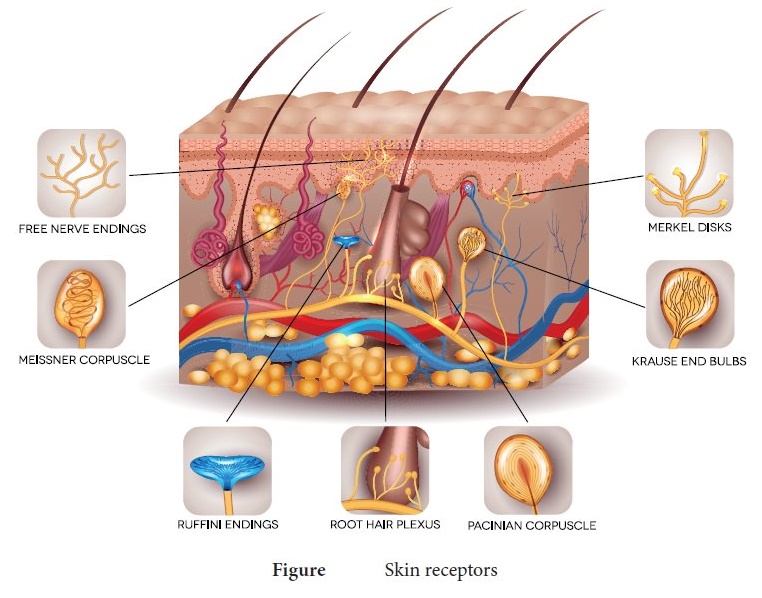 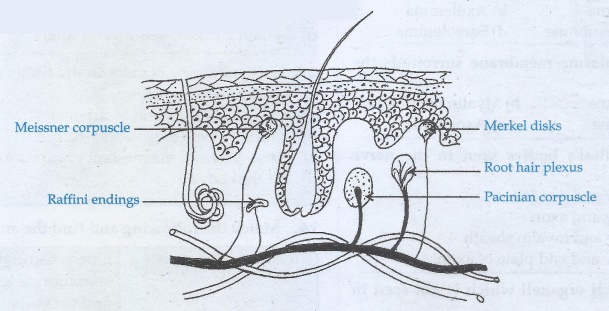 • Skin senses this skin is the largest sense organ.

• All over the skin sensory receptors of pressure heat cold and pain.

Following are the sensory receptors of skin.

• It is a light touch receptor lying in the deeper layer of epidermis.

• These are light touch receptor lying around the hair follicles.

• These are small light pressure receptors found scattered in the dermis and monitoring vibration due to pressure.

• It allows to detect different textures, temperature, hardness and pain.

This lie in the dermis responds to continuous pressure.

These are thermoreceptors that sense temperature

Q. Why are we getting running nose while crying?

Q. Label the parts of the neuron. 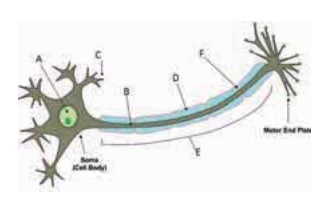 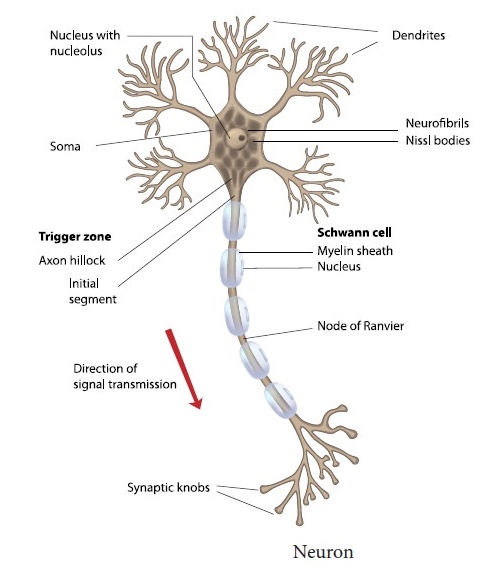