The olfactory glands and the supporting cells secrete the mucus.

The receptors for taste and smell are the chemoreceptors. The smell receptors are excited by air borne chemicals that dissolve in fluids. The yellow coloured patches of olfactory epithelium form the olfactory organs (figure.10.22) that are located on the roof of the nasal cavity. The olfactory epithelium is covered by a thin coat of mucus layer below and olfactory glands bounded connective tissues, above. It contains three types of cells: supporting cells, Basal cells and millions of pin shaped olfactory receptor cells (which are unusual bipolar cells). The olfactory glands and the supporting cells secrete the mucus. The unmyelinated axons of the olfactory receptor cells are gathered to form the filaments of olfactory nerve [cranial nerve I] which synapse with cells of olfactory bulb. The impulse, through the olfactory nerves, is transmitted to the frontal lobe of the brain for identification of smell and the limbic system for the emotional responses to odour. 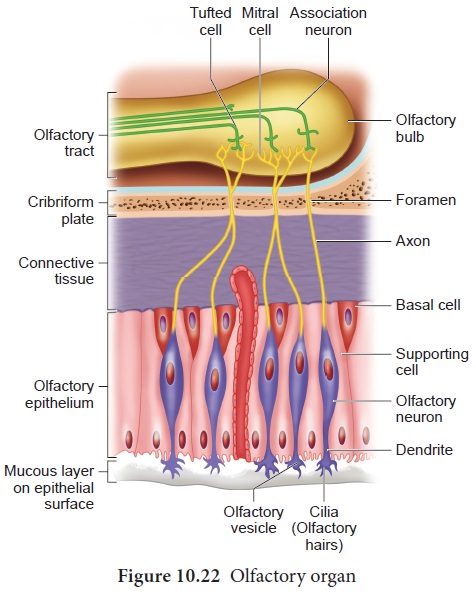 Gustatory receptor: The sense of taste is considered to be the most pleasurable of all senses. The tongue is provided with many small projections called papillae which give the tongue an abrasive feel. Taste buds are located mainly on the papillae which are scattered over the entire tongue surface.

Most taste buds are seen on the tongue (Figure 10.23) few are scattered on the soft palate, inner surface of the cheeks, pharynx and epiglottis of the larynx. Taste buds are flask-shaped and consist of 50 – 100 epithelial cells of two major types. 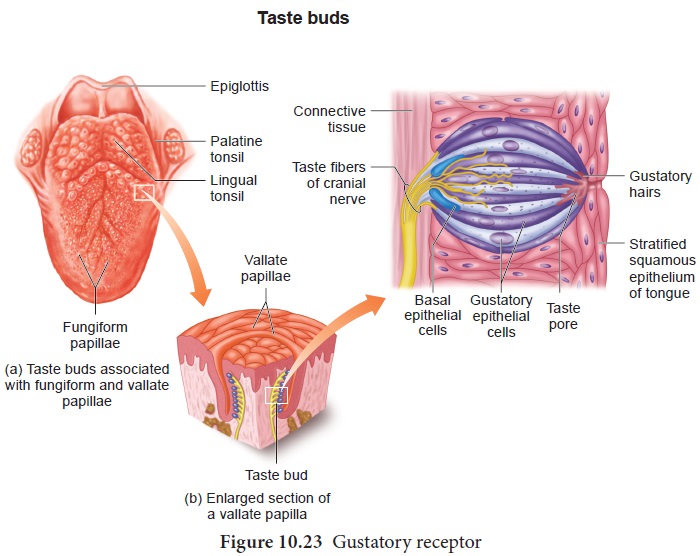 Skin is the sensory organ of touch and is also the largest sense organ. This sensation comes from millions of microscopic sensory receptors located all over the skin and associated with the general sensations of contact, pressure, heat, cold and pain. Some parts of the body, such as the finger tips have a large number of these receptors, making them more sensitive. Some of the sensory receptors present in the skin (Figure 10.24) are: 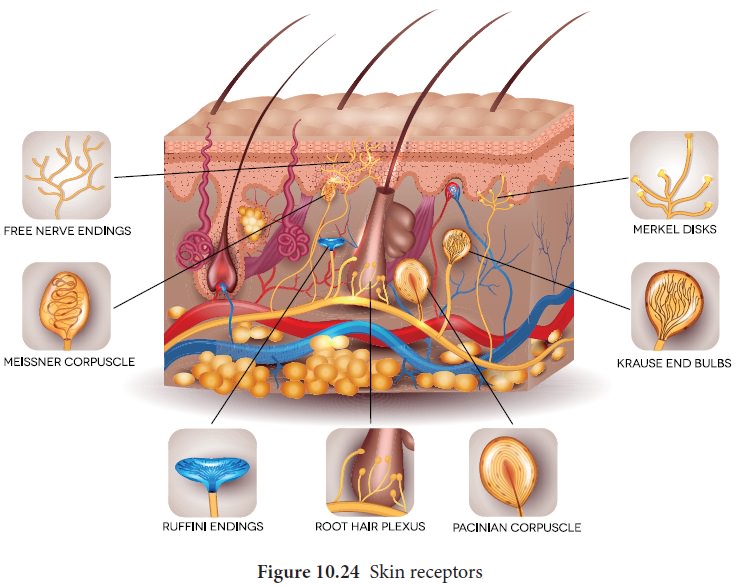 •                  Meissner’s corpuscles are small light pressure receptors found just beneath the epidermis in the dermal papillae. They are numerous in hairless skin areas such as finger tips and soles of the feet.

•                  Pacinian corpuscles are the large egg shaped receptors found scattered deep in the dermis and monitoring vibration due to pressure. It allows to detect different textures, temperature, hardness and pain

•         Ruffini endings which lie in the dermis responds- to continuous pressure.

Melanocytes are the cells responsible for producing the skin pigment, melanin, which gives skin its colour and protects it from the sun's UV rays. Vitiligo (Leucoderma) is a condition in which the melanin pigment is lost from areas of the skin, causing white patches, often with no clear cause. Vitiligo is not contagious. It can affect people of any age, gender, or ethnic group. The patches appear when melanocytes fails to synthesis melanin pigment.