Eye is the organ of vision; located in the orbit of the skull and held in its position with the help of six extrinsic muscles.

Eye is the organ of vision; located in the orbit of the skull and held in its position with the help of six extrinsic muscles. They are superior, inferior, lateral, median rectus muscles, superior oblique and inferior oblique muscles. These muscles aid in the movement of the eyes and they receive their nerve innervation from III, IV and VI cranial nerves. Eyelids, eye lashes and eye brows are the accessory structures useful in protecting the eyes. The eye lids protect the eyes from excessive light and foreign objects and spread lubricating secretions over the eye balls.

Eyelashes and the eyebrows help to protect the eyeballs from foreign objects, perspiration and also from the direct rays of sunlight. Sebaceous glands at the base of the eyelashes are called ciliary glands which secrete a lubricating fluid into the hair follicles. Lacrymal glands, located in the upper lateral region of each orbit, secrete tears. Tears are secreted at the rate of 1mL/day and it contains salts, mucus and lysozyme enzyme to destroy bacteria.

The conjunctiva is a thin, protective mucous membrane found lining the outer surface of the eyeball (Figure 10.14). 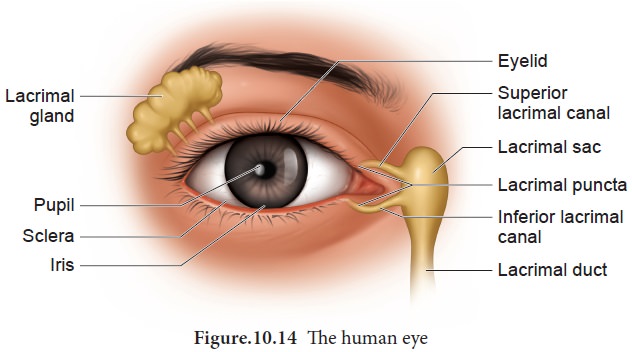 The eye ball is spherical in nature. The anterior one - sixth of the eyeball is exposed; the remaining region is fitted well into the orbit. The wall of the eye ball consists of three layers: fibrous Sclera, vascular Choroid and sensory Retina (Figure 10.15). 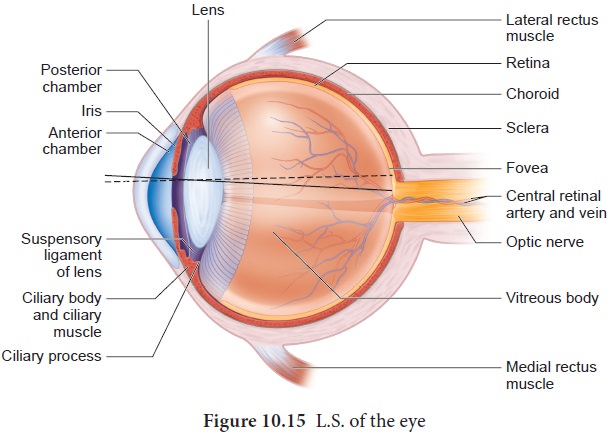 The outer coat is composed of dense non -vascular connective tissue. It has two regions: the anterior cornea and the posterior sclera. Cornea is a non-vascular transparent coat formed of stratified squamous epithelium which helps thecornea to renew continuously as it is very vulnerable to damage from dust. Sclera forms the white of the eye and protects the eyeball. Posteriorly the sclera is innervated by the optic nerve. At the junction of the sclera and the cornea, is a channel called ‘canal of schlemm’ which continuously drains out the excess of aqueous humor.

Choroid is highly vascularized pigmented layer that nourishes all the eye layers and its pigments absorb light to prevent internal reflection.

Anteriorly the choroid thickens to form the ciliary body and iris. Iris is the coloured portion of the eye lying between the cornea and lens. The aperture at the centre of the iris is the pupil through which the light enters the inner chamber. Iris is made of two types of muscles the dilator papillae (the radial muscle) and the sphincter papillae (the circular muscle).In the bright light, the circular muscle in the iris contract; so that the size of pupil decreases and less light enters the eye. In dim light, the radial muscle in the iris contract; so that the pupil size increases and more light enters the eye. Smooth muscle present in the ciliary body is called the ciliary muscle which alters the convexity of the lens for near and far vision. The ability of the eyes to focus objects at varying distances is called accommodation which is achieved by suspensory ligament, ciliary muscle and ciliary body. The suspensory ligament extends from the ciliary body and helps to hold the lens in its upright position. The ciliary body is provided with blood capillaries that secrete a watery fluid called aqueous humor that fills the anterior chamber. 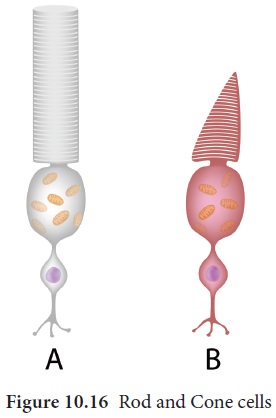 The yellow flat spot at the centre of the posterior region of the retina is called macula lutea which is responsible for sharp detailed vision. A small depression present in the centre of the yellow spot is called fovea centralis which contains only cones. The optic nerves and the retinal blood vessels enter the eye slightly below the posterior pole, which is devoid of photo receptors; hence this region is called blind spot.

When light enters the eyes, it gets refracted by the cornea, aqueous humor and lens and it is focused on the retina and excites the rod and cone cells. The photo pigment consists of Opsin, the protein part and Retinal, a derivative of vitamin A. Light induces dissociation of retinal from opsin and causes the structural changes in opsin. This generates an action potential in the photoreceptor cells and is transmitted by the optic nerves to the visual cortex of the brain, via bipolar cells, ganglia and optic nerves, for the perception of vision.

Myopia (near sightedness): The affected person can see the nearby objects but not the distant objects. This condition may result due to an elongated eyeball or thickened lens; so that the image of distant object is formed in front of the yellow spot. This error can be corrected using concave lens that diverge the entering light rays and focuses it on the retina.

Hypermetropia (long sightedness): the affected person can see only the distant objects clearly but not the objects nearby. This condition results due to a shortened eyeball and thin lens; so the image of closest object is converged behind the retina. This defect can be overcome by using convex lens that converge the entering light rays on the retina.

Presbyopia: Due to aging, the lens loses elasticity and the power of accommodation. Convex lenses are used to correct this defect.

Astigmatism is due to the rough (irregular) - curvature  of  cornea or lens. Cylindrical glasses are used to correct this error (Figure 10.17).

Cataract: Due to the changes in nature of protein, the lens becomes opaque. It can be corrected by surgical procedures. 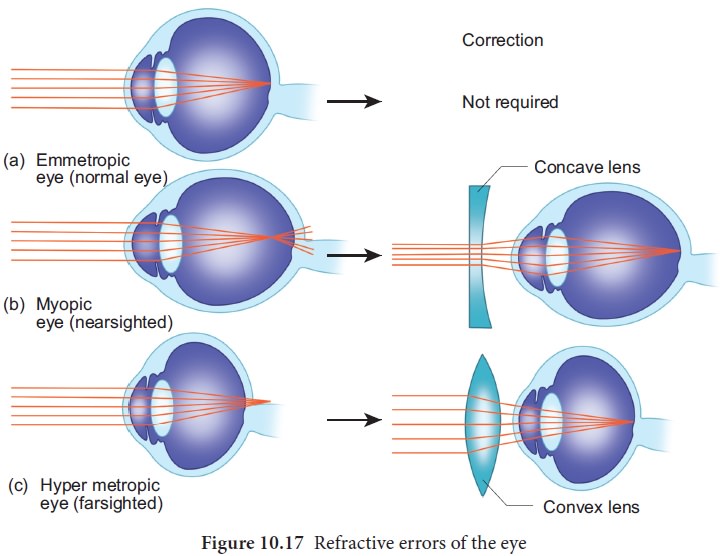