The CNS includes the brain and the spinal cord, which are protected by the bones of the skull and vertebral column.

The CNS includes the brain and the spinal cord, which are protected by the bones of the skull and vertebral column. During its embryonic development, CNS develops from the ectoderm.

The brain acts as the command and control system. It is the site of information processing. It is located in the cranial cavity and is covered by three cranial meninges. The outer thick layer is Duramater which lines the inner surface of the cranial cavity; the median thin layer is Arachnoid mater which is separated from the duramater by a narrow subdural space. The innermost layer is Piamater which is closely adhered to the brain but separated from the arachnoid mater by the subarachnoid space. The brain is divided into three major regions: Forebrain, Midbrain and Hindbrain.

It comprises the following regions: Cerebrum and Diencephalon. Cerebrum is the ‘seat of intelligence’ and forms the major part of the brain. The cerebrum consists of an outer cortex, inner medulla and basal nuclei. The superficial region of the cerebrum is called cerebral cortex, which looks grey due to the presence of unmyelinated nerve cells. Cerebral cortex consists of neuronal cell body, dendrites, associated glial and blood vessels. The surface of the cerebrum shows many convolutions (folds) and grooves. The folds are called gyri (singular gyrus); the shallow grooves between the gyri are called sulci (singular sulcus) and deep grooves are called fissures. These sulci and gyri increase the surface area of the cerebral cortex. Several sulci divide the cerebrum into eight lobes: a pair of frontals, parietals, temporals and occipital lobes (Figure10.7 & Table 10.2). 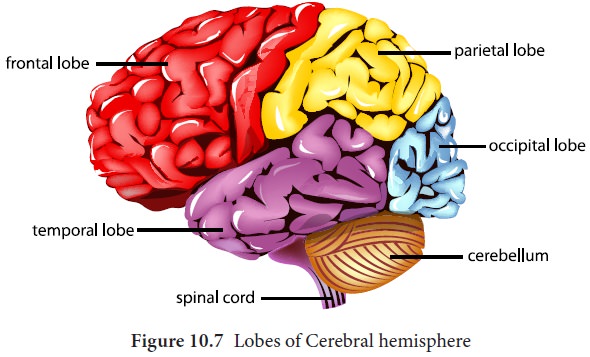 Cerebral cortex has three functional areas namely sensory areas occur in the parietal, temporal and occipital lobes of the cortex. They receive and interpret the sensory impulses. Motor area of the cortex which controls voluntary muscular movements lies in the posterior part of the frontal lobes. The areas other than sensory and motor areas are called Association areas that deal with integrative functions such as memory, communications, learning and reasoning. Inner to the cortex is medulla which is white in colour and actsas a nerve tract between the cortex and the diencephalon.

Thalamus is composed of grey mater which serves as a relay centre for  impulses between the spinal cord, brain stem and cerebrum. Within the thalamus, information is sorted and edited and plays a key role inlearning and memory. It is a major coordinating centre for sensory and motor signalling. 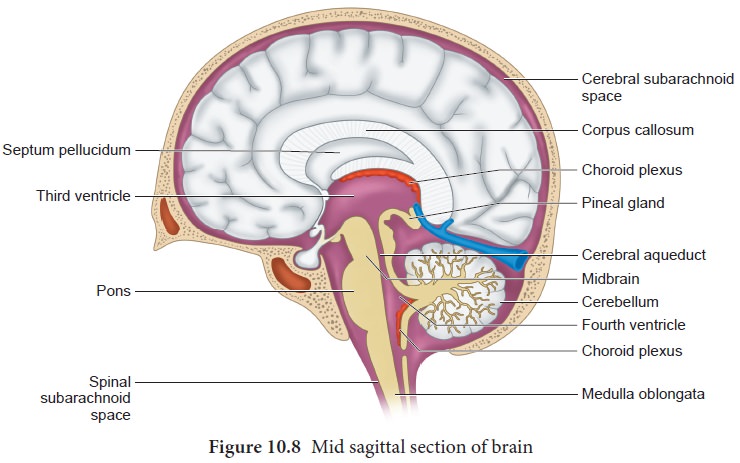 Hypothalamus forms the floor of the diencephalon. The downward extension of the hypothalamus, the infundibulum connect sthe hypothalamus with the pituitary gland. The hypothalamus contains a pair of small rounded body called mammillary bodies that are involved in olfactory reflexes and emotional responses to odour. Hypothalamus maintains homeostasis and has many centres which control the body temperature, urge for eating and drinking. It also contains a group of neurosecretory cells which secrete the hypothalamic hormones. Hypothalamus also acts as the satiety centre.

The inner part of the cerebral hemisphere constitutes the limbic system. The main components of limbic system are olfactory bulbs, cingulate gyrus, mammillary body, amygdala, hippocampus and hypothalamus. The limbic system is called ‘emotional brain’ because it plays a primary role in the regulation of pleasure, pain, anger, fear, sexual feeling and affection. The hippocampus and amygdala also play a role in memory (Figure 10.9). 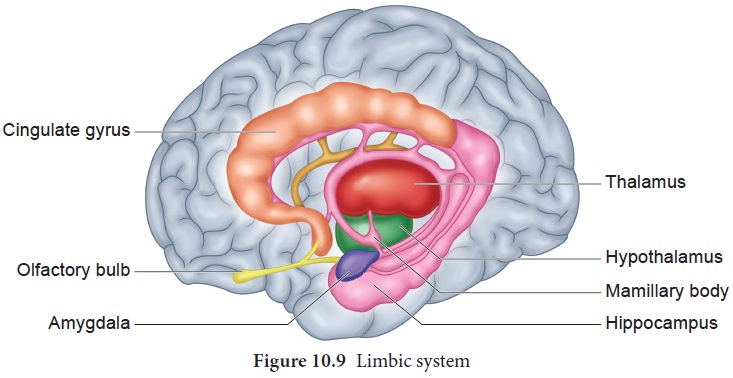 Brain stem is the part of the brain between the spinal cord and the diencephalon. It consists of mid brain, pons varolii and medulla oblongata (Figure 10.10). 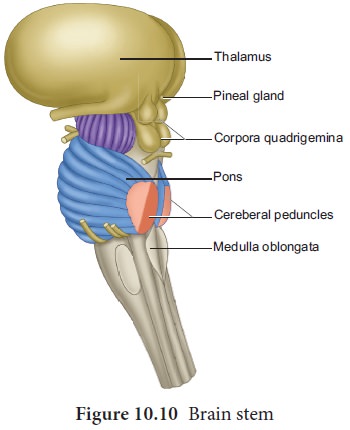 The mid brain is located between the diencephalon and the pons. The lower portion of the midbrain consists of a pair of longitudinal bands of nervous tissue called cerebral peduncles which relay impulses back and forth between cerebrum, cerebellum, pons and medulla. The dorsal portion of the midbrain consists of four rounded bodies called corpora quadrigemina which acts as a reflex centre for vision and hearing.

Rhombencephalon forms the hind brain. It comprises of cerebellum, pons varolii and medulla oblongata. Cerebellum is the second largest part of the brain. It consists of two cerebellar hemispheres and central worm shaped part, the vermis. The cerebellum controls and coordinates muscular movements and body equilibrium. Any damage to cerebellum often results in uncoordinated voluntary muscle movements.

Medulla oblongata forms the posterior most part of the brain. It connects the spinal cord with various parts of the brain. It receives and integrates signals from spinal cord and sends it to the cerebellum and thalamus. Medulla contains vital centres that control cardio vascular reflexes, respiration and gastric secretions.

Ventricles of the brain

The brain has four hollow, fluid filled spaces. The C- shaped space found inside each cerebral hemisphere forms the lateral ventricles I and II which are separated from each other by a thin membrane called the septumpellucidum. Each lateral ventricle communicates with the narrow III ventricle in the diencephalon through an opening called interventricular foramen (foramen of Monro). The ventricle III is continuous with the ventricle IV in the hind brain through a canal called aqueduct of Sylvius (cerebral aqueduct). Choroid plexus is a network of blood capillaries found in the roof of the ventricles and forms cerebro spinal fluid (CSF) from the blood. CSF provides buoyancy to the CNS structures; CSF acts as a shock absorber for the brain and spinal cord; it nourishes the brain cells by transporting constant supply of food and oxygen; it carries harmful metabolic wastes from the brain to the blood; and maintains a constant pressure inside the cranial vessels.

In the cross section of spinal cord (Figure 10.11), there are two indentations: the posterior median sulcus and the anterior median fissure. Although there might be slight variations, the cross section of spinal cord is generally the same throughout its length. In contrast to the brain, the grey matter in the spinal cord forms an inner butterfly shaped region surrounded by the outer white matter. The grey matter consists of neuronal cell bodies and their dendrites, interneurons and glial cells. White matter consists of bundles of nerve fibres. In the center of the grey matter there is a central canal which is filled with CSF. Each half of the grey matter is divided into a dorsal horn, a ventral horn and a lateral horn.

The dorsal horn contains cell bodies of interneurons on which afferent neurons terminate. The ventral horn contains cell bodies of the efferent motor neurons supplying the skeletal muscle. Autonomic nerve fibres, supplying cardiac and smooth muscles and exocrine glands, originate from the cell bodies found in the lateral horn. In the white matter, the bundles of nerve fibres form two types of tracts namely ascending tracts which carry sensory impulses to the brain and descending tracts which carry motor impulses from the brain to the spinal nerves at various levels of the spinal cord. The spinal cord shows two enlargements, one in the cervical region and another one in the lumbosacral region. The cervical enlargement serves the upper limb and lumbar enlargement serves the lower limbs.