The spinal cord remains as a connecting functional nervous structure in between the brain and effector organs.

When dust falls in our eyes, the eyelids close immediately not waiting for our willingness; on touching a hot pan, the hand is withdrawn rapidly. Do you know how this happens?

The spinal cord remains as a connecting functional nervous structure in between the brain and effector organs. But sometimes when a very quick response is needed, the spinal cord can effect motor initiation as the brain and brings about an effect. This rapid action by spinal cord is called reflex action. It is a fast, involuntary, unplanned sequence of actions that occurs in response to a particular stimulus. The nervous elements involved in carrying out the reflex action constitute a reflex arc or in other words the pathway followed by a nerve impulse to produce a reflex action is called a reflex arc -(Figure 10.12).

Functional components of a reflex arc

Sensory Receptor - It is a sensory structure that responds to a specific stimulus. Sensory Neuron - This neuron takes the sensory impulse to the grey (afferent) matter of the spinal cord through the dorsal root of the spinal cord.

Interneurons - One or two interneurons may serve to transmit the impulses from the sensory neuron to the motor neuron.

Motor Neuron - it transmits impulse from CNS to the effector organ.

Effector Organs -It may be a muscle or gland which responds to the impulse received. There are two types of reflexes. They are

1. Unconditional reflex is an inborn reflex for an unconditioned stimulus. It does not need any past experience, knowledge or training to occur; Ex: blinking of an eye when a dust particle about to fall into it, sneezing and coughing due to foreign particle entering the nose or larynx.

1.              Conditioned reflex is a respone to a stimulus that has been acquired by learning. This does not naturally exists in animals. Only an experience makes it a part of the behaviour. Example: excitement of salivary gland on seeing and smelling a food. The conditioned reflex was first demonstrated by the Russian physiologist Pavlov in his classical conditioning experiment in a dog. The cerebral cortex controls the conditioned reflex.

PNS consists of all nervous tissue outside the CNS. Components of PNS include nerves, ganglia, enteric plexuses and sensory receptors. A nerve is a chord like structure that encloses several neurons inside. Ganglia (singular-ganglion) are small masses of nervous tissue, consisting primarily of neuron cell bodies and are located outside the brain and spinal cord. Enteric plexuses are extensive networks of neurons located in the walls of organs of the gastrointestinal tract. The neurons of these plexuses help in regulating the -digestive system. The specialized structure that helps to respond to changes in the environment i.e. stimuli are called sensory receptor which triggers nerve impulses along the afferent fibres to CNS. PNS comprises of cranial nerves arising- from the brain and spinal- nerves arising from the spinal cord.

(A) Cranial nerves: There are 12 pairs of cranial nerves, of which the first two pairs arise from the fore brain and the remaining 10 pairs from the mid brain. Other than the Vagus nerve, which extends into the abdomen, all cranial nerves serve the head and face (Table 10.3). 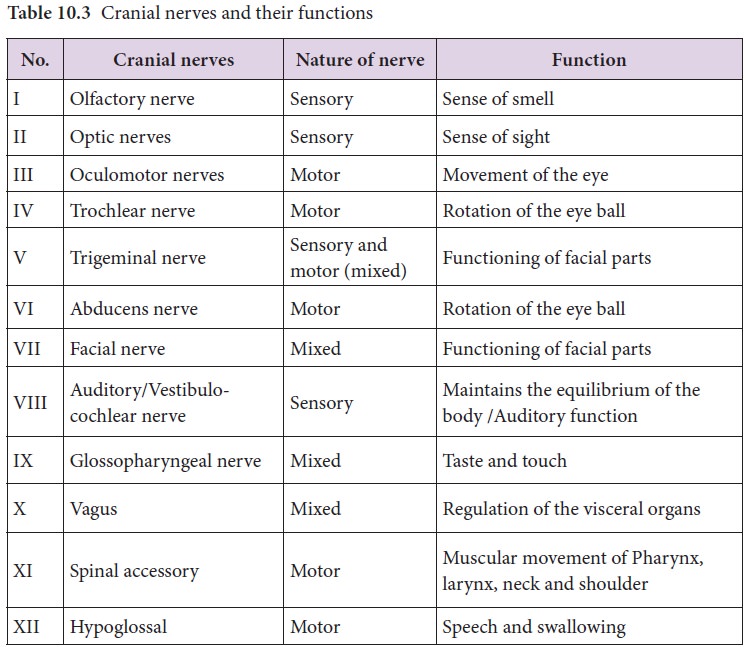 (B) Spinal nerves: 31 pairs of spinal nerves emerge out from the spinal cord through spaces called the intervertebral foramina found between the adjacent vertebrae. The spinal nerves are named according to the region of vertebral column from which they originate

Each spinal nerve is a mixed nerve containing both afferent (sensory) and efferent (motor) fibres. It originates as two roots:1) a posterior dorsal root with a ganglion outside the spinal cord and 2) an anterior ventral root with no external ganglion.

The autonomic neural system is auto functioning and self governed. It is a part of peripheral neural system that innervates smooth muscles, glands and cardiac muscle. This system controls and coordinates the involuntary activities of various organs. ANS (Figure.10.13) controlling centre is in the hypothalamus. Autonomic neural system comprises the following components: 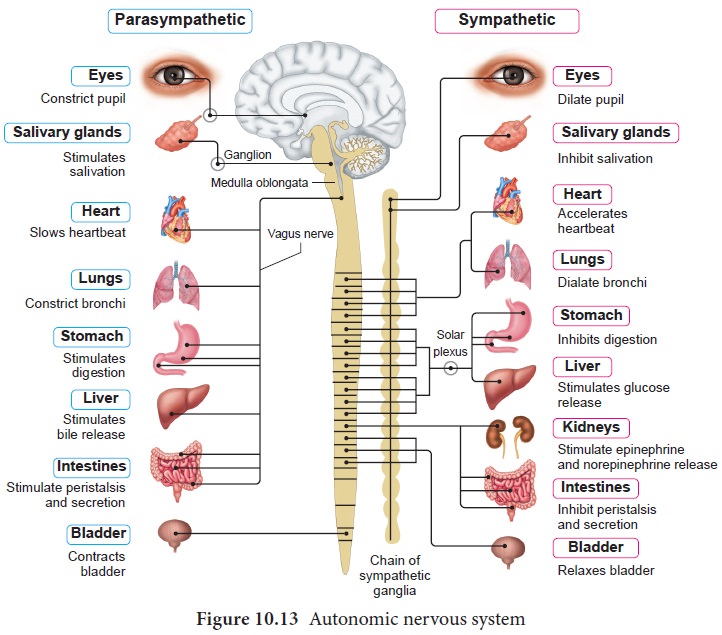 Preganglionic neuron whose cell body is in the brain or spinal cord; its myelinated axon exits the CNS as part of cranial or spinal nerve and ends in an autonomic ganglion. 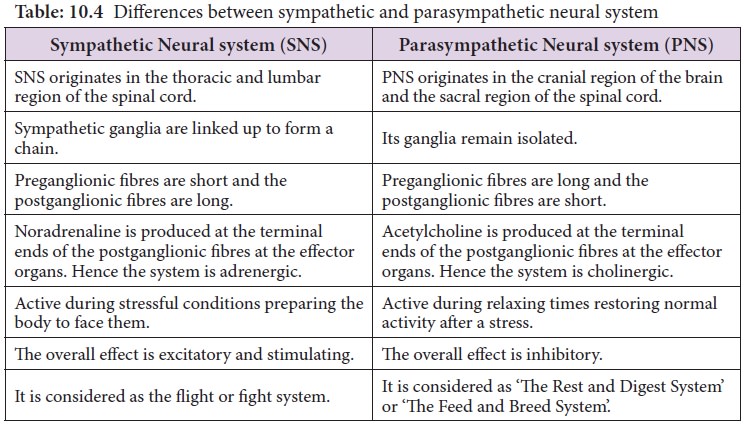