The ear is the site of reception of two senses namely hearing and equilibrium.

The ear is the site of reception of two senses namely hearing and equilibrium. Anatomically, the ear is divided into three regions: the external ear, the middle ear and internal ear.

There are very fine hairs and wax producing sebaceous glands called ceruminous glands in the external auditory meatus. The combination of hair and the ear wax [cerumen] helps in preventing dust and foreign particles from entering the ear.

The middle ear is a small air-filled cavity in the temporal bone. It is separated from the external ear by the eardrum and from the internal ear by a thin bony partition; the bony partition contains two small membrane covered openings called the oval window and the round window.

The middle ear contains three ossicles: malleus [hammer bone], incus [anvil bone] and stapes [stirrup bone] which are attached to one another. The malleus is attached to the tympanic membrane and its head articulates with the incus which is the intermediate bone lying between the malleus and stapes. The stapes is attached to the oval window in the inner ear. The ear ossicles transmit sound waves to the inner ear. A tube called Eustachian tube connects the middle ear cavity with the pharynx. This tube helps in equalizing the pressure of air on either sides of the ear drum.

Inner ear is the fluid filled cavity consisting of two parts, the bony labyrinth and the membranous labyrinths. The bony labyrinth consists of three areas: cochlea, vestibule and semicircular canals. The cochlea is a coiled portion consisting of 3 chambers namely: scala vestibuli and scala tympani- these two are filled with perilymph; and the scala media is filled with endolymph. At the base of the cochlea, the scala vestibule ends at the ‘oval window’ whereas the scala tympani ends at the ‘round window’ of the middle ear. The chambers scala vestibuli and scala media are separated by a membrane called Reisner’s membrane whereas the scala media and scala tympani are separated by a membrane called Basilar membrane (Figure 10.19).

The organ of corti (figure.10.19) is a sensory ridge located on the top of the Basilar membrane and it contains numerous hair cells that are arranged in four rows along the length of the basilar membrane. Protruding from the apical part of each hair cell is hair like structures known as stereocilia. During the conduction of sound wave, stereocilia makes a contact with the stiff gel membrane called tectorial membrane, a roof like structure overhanging the organ of corti throughout its length. 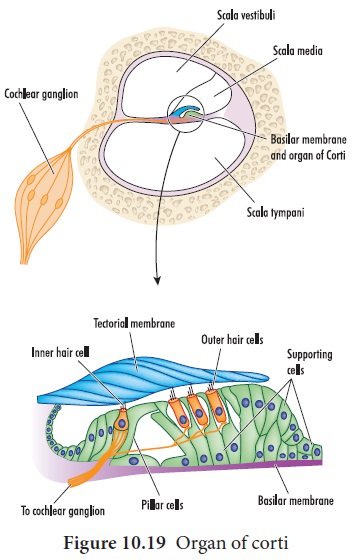 This increased pressure generates pressure waves in the fluid of perilymph. This pressure causes the round window to alternately bulge outward and inward meanwhile the basilar membrane along with the organ of Corti move up and down. These movements of the hair alternately open and close the mechanically gated ion channels in the base of hair cells and the action potential is propagated to the brain as sound sensation through cochlear nerve.

In sensory -neural deafness, the defect may be in the organ of Corti or the auditory nerve or in the ascending auditory pathways or auditory cortex.

Balance is part of a sense called proprioception, which is the ability to sense  the position, orientation and movement of the body. The organ of balance is known as the vestibular system which is located in the inner ear next to the cochlea. The vestibular system is composed of a series of fluid filled sacs and tubules.These sacs and tubules contain endolymph and are kept in the surrounding perilymph (Figure-10.20). These two fluids, perilymph and endolymph, respond to the mechanical forces, during changes occurring in body position and acceleration (Figure 10.21). 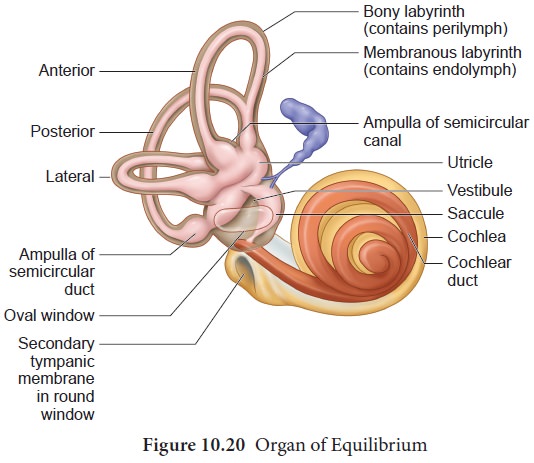 The utricle and saccule are two membranous sacs, found nearest the cochlea and contain equilibrium receptor regions called maculae that are involved in detecting the linear movement of the head. The maculae contain the hair cells that act as mechanorecptors. These hair cells are embeded in a gelatinous otolithic membrane that contains small calcareous particles called otoliths. This membrane adds weight to the top of the hair cells and increase the inertia. 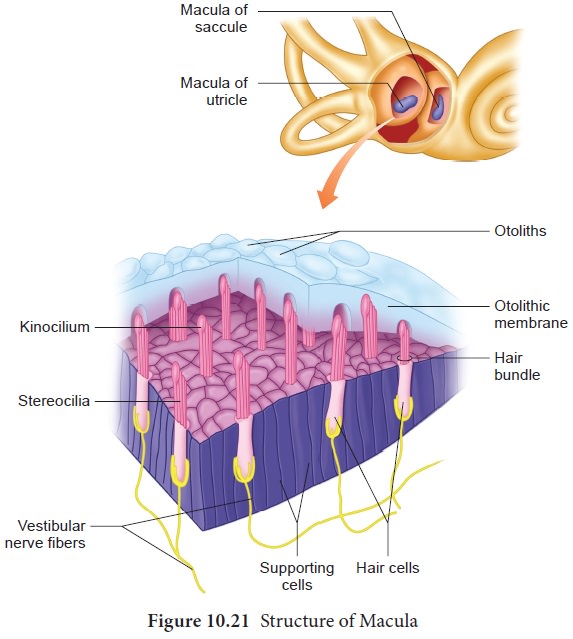 Each ampulla has a sensory area known as crista ampullaris which is formed of sensory hair cells and supporting cells. The function of these canals is to detect rotational movement of the head.