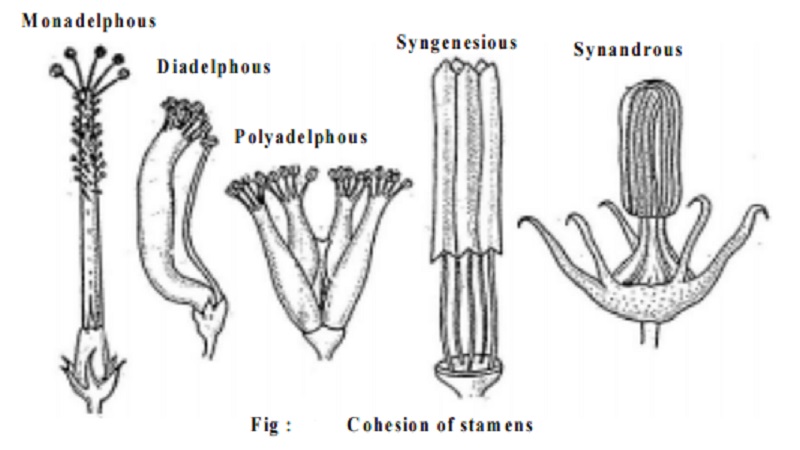 Sterile stamen or staminode : In some plants, a stamen may not develop any fertile anther. Such sterile stamens are called staminodes eg. Cassia.

Monadelphous: All the stamens of a flower are united in one bundle by fusion of their filaments only. The anthers are free, eg. Hibiscus, Abutilon, etc.

Diadelphous: All the stamens of a flower are united in two bundles by fusion of their filaments only. The anthers are free, eg.Clitoria

Polyadelphous: Filaments of all the stamens unite to form more than two bundles. The anthers are free, eg. Citrus.

Epipetalous: Stamens adhre to the petals by their filaments and hence appearing to arise from them, eg. Solanum, Ocimum, etc.

Epitepalous (Epiphyllous): When stamens united with the perianth leaves, the stamens are said to be Epitepalous. eg.Asphodelus. (Spider lilly)
Gynandrous: Stamens adhere to the carpels either throughout their length of by their anthers only. eg. Calotropis.

i.   Didynamous: Out of four stamens in a flower, two are long and two are short, eg.
Ocimum

ii.  Tetradynamous: Out of six stamens in a flower, two outer are short and four inner are long, eg. Mustard.

Apocarpous: Gynoecium made up of two or more carpels which are free; eg. Polyalthia.

Syncarpous: Gynoecium consists of two or more carpels which are fused; eg. Hibiscus.

Depending on the number of chambers, the ovary may be described as unilocular, bilocular, trilocular etc.