What kinds of RNA play a role in life processes? 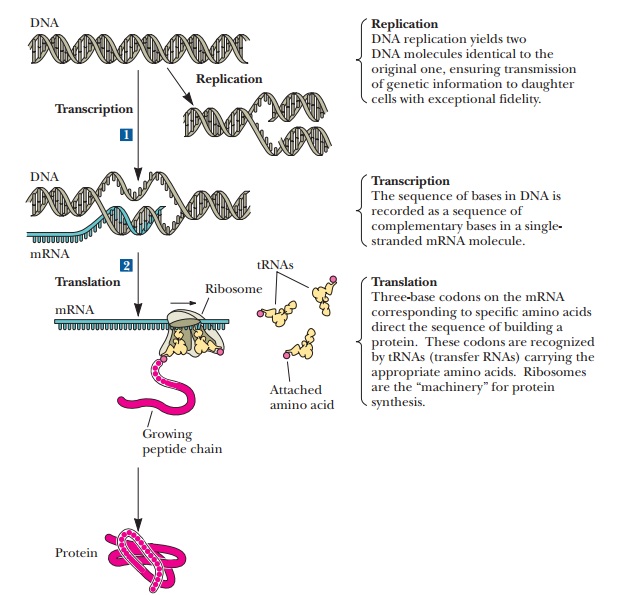 What kinds of RNA play a role in life processes?

Six kinds of RNA-transfer RNA (tRNA), ribosomal RNA (rRNA), messenger RNA (mRNA), small nuclear RNA (snRNA), micro RNA (miRNA), and small interfering RNA (siRNA)-play an important role in the life processes of cells. Figure 9.20 shows the process of information transfer. The various kinds of RNA participate in the synthesis of proteins in a series of reactions ultimately directed by the base sequence of the cellâ€™s DNA. The base sequences of all types of RNA are determined by that ofDNA. The process by which the order of bases is passed from DNA to RNA is calledtranscription. 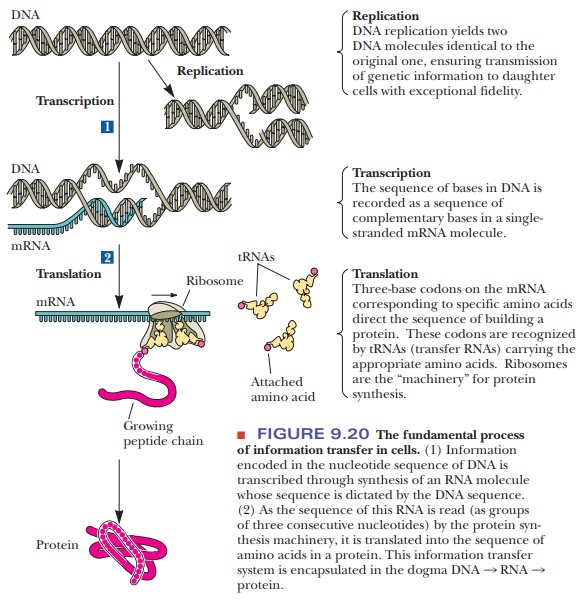 Ribosomes, in which rRNA is associated with proteins, are the sites for assembly of the growing polypeptide chain in protein synthesis. Amino acids are brought to the assembly site covalently bonded to tRNA, as aminoacyltRNAs. The order of bases in mRNA specifies the order of amino acids in the growing protein; this process is called translation of the genetic message. A sequence of three bases in mRNA directs the incorporation of a particular amino acid into the growing pro-tein chain. We are going to see that the details of the process differ in prokaryotes and in eukaryotes (Figure 9.21). In prokaryotes, there is no nuclear membrane, so mRNA can direct the synthesis of proteins while it is still being transcribed. Eukaryotic mRNA, on the other hand, undergoes considerable processing. One of the most important parts of the process is splicing out intervening sequences (introns), so that the parts of the mRNA that will be expressed (exons) are contiguous to each other.

Small nuclear RNAs are found only in the nucleus of eukaryotic cells, and they are distinct from the other RNA types. They are involved in processing of initial mRNA transcription products to a mature form suitable for export from the nucleus to the cytoplasm for translation. Micro RNAs and small interfering RNAs are the most recent discoveries. SiRNAs are the main players in RNAinterference (RNAi), a process that was first discovered in plants and later inmammals, including humans. RNAi causes the suppression of certain genes. It is also being used extensively by scientists who wish to eliminate the effect of a gene to help discover its function. Table 9.1 summarizes the types of RNA. 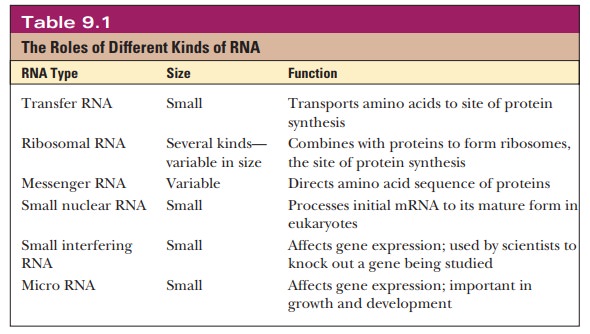 Biochemistry
Medical - All Subjects
MBBS - All Subjects
Nursing - All Subjects
Pharmacy - All Subjects
MD - All Subjects
MGR University - All Subjects
Biochemistry: Nucleic Acids: How Structure Conveys Information
Levels of Structure in Nucleic Acids
The Covalent Structure of Polynucleotides
The DNA Family Tree
The Structure of DNA
What is the nature of the DNA double helix?
Are there other possible conformations of the double helix?
How does prokaryotic DNA supercoil into its tertiary structure?
How does supercoiling take place in eukaryotic DNA?
What Makes a Triple Helix Useful in Drug Design?
Denaturation of DNA
The Principal Kinds of RNA and Their Structures
What kinds of RNA play a role in life processes?
What is the role of transfer RNA in protein synthesis?
How does ribosomal RNA combine with proteins to form the site of protein synthesis?
The Human Genome Project: Treasure or Pandora’s Box?
Why Identical Twins Are Not Identical